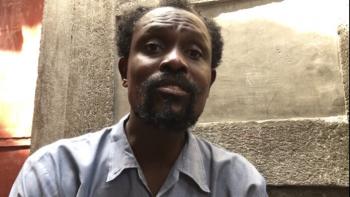 Oxygène David is the Secretary General of the Movement for Liberty, Equality, and Fraternity (MOLEGHAF). Photo: Kim Ives/Haïti Liberté

After a three-month stand-off, Haiti’s main opposition coalition began last week sitting down with de facto interim Prime Minister Ariel Henry to carry out talks on the “transition” to democracy i.e. the return to an elected government.

However, the renewed negotiations are prompting outcry from many groups in the opposition coalition.

Magali Comeau-Denis, the putative leader of the coalition made up of groups which signed an Aug. 30, 2021 political agreement at Pétionville’s Montana Hotel, is coming under harsh criticism for unilaterally parlaying on May 11 and May 15 with Henry. Comeau-Denis was the Culture Minister under Prime Minister Gérard Latortue’s de facto coup regime from 2004 to 2006.

But several Montana Accord signatories are not happy with the talks. Among political parties, the Struggling People’s Organization (OPL) is not opposed to holding discussions between the Montana Accord’s Monitoring Office (BSA) and Ariel Henry. OPL’s Dario Cyriac said he’d be glad if an agreement is found, but he has reservations about the meetings’ format: “Montana should have an inclusive approach. The BSA includes 21 members. Why is only Magali Comeau-Denis taking part in meetings. At the OPL, we consider this fact worrying. This weakens the deal.”

Josué Merilien, long-time leader of the teachers’ union and representative of the left-wing Konbit group (also a Montana Accord signatory) shares the same position as OPL.

But another Montana Accord signer is angry that negotiations with Henry are now resuming under U.S. Embassy pressure and has pulled out of the coalition. The Movement for Liberty, Equality, and Fraternity (MOLEGHAF), based in the impoverished hilltop Fort-National neighborhood of Port-au-Prince, had believed that the Montana Accord leadership sincerely wanted a “Haitian-led solution.” Haïti Liberté took a moment to get the perspective of Oxygène David, MOLEGHAF’s secretary general.

Haïti Liberté: What is your reading of the political moment, in particular the renewed negotiations between the Sep. 11 Accord of Prime Minister Ariel Henry and the Montana Accord, of which MOLEGHAF is a signatory?

Oxygène David: MOLEGHAF, as a progressive, revolutionary organization, signed the Montana Accord for two reasons.

First, the leadership of the Montana Accord said it was looking for a “Haitian solution.” A “Haitian solution” means that we – Haitian actors, organizations, and truly combative political parties – would come with the solution free of the big imperialist powers’ stranglehold. MOLEGHAF agreed to sign and join the Montana Accord [on Aug. 30, 2021 at the Montana Hotel], because we were supposed to find this “Haitian solution,” without bowing to the dictates of [then U.S. Chargé d’Affaires] Kenneth Merten,[long-time U.S. State Department officer and currently head of the UN Office in Haiti (BINUH)] Helen La Lime, or the French, Canadian, and U.S. Embassies.

The second reason MOLEGHAF signed the Montana Accord was in line with the Leninist principle of “march separately, but strike the blow together.” At this political crossroads, MOLEGHAF thought it best to “strike together” with other groups to find a “Haitian solution” even though MOLEGHAF was “marching separately” with respect to its ideology and stance on the class struggle.

Currently, what is MOLEGHAF’s position? I can say, as MOLEGHAF’s Secretary General, that even before we had pulled out of the Montana Accord, we were very critical of it. We were critical because we saw that Kenneth Merten came to meet with the people leading the Montana Accord, like Magali Comeau-Denis, and after that meeting, we saw us entering a dangerous crossroads where the Haitian masses would be led into a difficult situation.

After that meeting between Magali Comeau-Denis and Merten, we saw the Montana Accord stray from its original orientation of finding a “Haitian solution.” Instead, we saw it having meetings with Kenneth Merten and the U.S. Embassy all the time, meetings in which Merten gave orders for the Montana to sit down with the PEN Accord, and then with the Sep. 11 Accord, and the Sep. 11 Accord sat with the [André Michel’s Democratic and Popular Sector] SDP, the SDP sat down with the Montana, and then Montana sat down with Ariel Henry.

So we, as a progressive, revolutionary organization see that there is an international plot. A war has been launched against the popular masses and our society’s victims so that the popular masses’ project cannot advance. That is a project for liberty and well-being, which was the project of Haitian founding father Jean-Jacques Dessalines, who was assassinated two years after one of history’s greatest revolutions, which was Haiti’s 1804 revolution.

So that is MOLEGHAF’s position. We’re not going to facilitate the work of the imperialists, or the PEN Accord, or Ariel Henry, or the work of Magali Comeau-Denis, although we know that historically she has been against the masses.

We in MOLEGHAF are categorically opposed to the demands, actions, and road that Montana has taken. We in MOLEGHAF say that the Montana has lost its way, its original mission of looking for a Haitian solution. Now there is no Haitian solution. The Montana Accord has capitulated along with the person leading it, Magalie Comeau-Denis, to embrace the solution concocted by the imperialist laboratory, and delivered in front of our face, a so-called consensus, to sit down with Ariel Henry who is the masses’ enemy, who took part in the assassination of the indicted president Jovenel Moïse. Ariel Henry is responsible for a number of massacres in the country, has plotted against the people, to keep the people in hunger, misery, and poverty. So we energetically denounce the leaders of the Montana Accord like Magali Comeau-Denis who has chosen to sit down with Ariel Henry.

Today, we are at an historic crossroads. The Montana Accord will not give us the solution to our problems, because it is built on lies. It said that Haitians would bring their own solution, but it went to get the solution from Kenneth Merten, who represents the U.S. imperialists. The solution is neither coming from the PEN Accord, which assembles a bunch of treacherous traditional politicians [like former Sen. Youri Latortue and Sen. Joseph Lambert], who are linked with the U.S. imperialists, are satellites of the U.S. imperialists, who do the work of the CIA. PEN cannot come with a solution.

The SDP also cannot provide a solution. It is just a dog begging for bones at Ariel Henry’s table of power. The solution will not come from the National Palace or the Prime Minister’s office with Ariel Henry, who is just the third version of the PHTK [Haitian Bald-Headed Party]. The first version was President Michel Martelly, the second version was the indicted President Jovenel Moïse, and the third version is Ariel. Whether it’s the first, second or third version, the PHTK is an anti-people, criminal, murderous party.

The solution today must come from the popular masses, who must wake up and stand up, to put forth their popular, progressive, political demands, to lead a truly autonomous struggle to get the country out of the hole where it finds itself.

We in MOLEGHAF denounce the negotiations of Magali Comeau-Denis with Ariel Henry as a false solution, meaning a solution which merely involves dividing up the cake of power. They might give some crumbs to the popular quarters, where the exploited, oppressed and dominated mass of workers live. But the working class won’t get any solution.

The popular masses must rise up with an enlightened vanguard to construct an alternative, with comrades who are politically and ideologically clear, rooted in the masses, to continue a struggle which is anti-occupation, anti-imperialist, and anti-capitalist.

Haïti Liberté: Is MOLEGHAF going to try to correct the course of the Montana Accord and wrest control of its leadership from Magali Comeau-Denis and her confederates or do you intend to leave the coalition?

Oxygène David: It’s not worth going to battle to try to take leadership of the Montana Accord. The Montana Accord is completely rotten after its dealings with the U.S. imperialists, and under the leadership of Magali Comeau-Denis, who is wheeling and dealing with the U.S. imperialists and Ariel Henry to find a so-called solution. Today we are in the stage of reaching out. As a progressive revolutionary organization, we will go everywhere: go to talk to the masses, go to discuss with the oppressed, the abandoned and excluded, go to talk to the middle class, go discuss with the progressives, with the intellectual elite which is close to the masses, so we can establish a new camp of combat, a new autonomous struggle.

MOLEGHAF wants to play the role of a vanguard, which is completely embedded in the popular masses. MOLEGHAF has to use all its avenues and means, everything imaginable and possible, to see if it can influence the political scene to serve as a mouthpiece to lead the masses’ struggle to its conclusion, until it has a result.

We just have to let the Montana Accord fall apart, to enter a free fall, so the masses can establish their own organization, which is sovereign, and not taking orders from the capitalists, imperialists, and embassies.