In the Montana Accord Coalition, the Lavalas Family remains vigilant 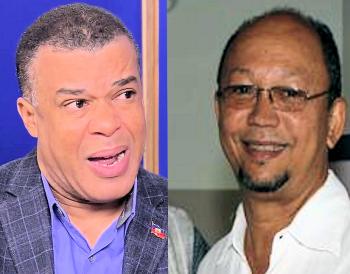 Former senator Stephen Benoit (left) and Leslie Voltaire, the FL representative in the Montana Accord coalition.

Haiti’s post-Jovenel Moïse political accords, just like those during his lifetime, clearly have a problem.

There is a kind of curse that plagues them as they advance toward the goals they set forth. During the late president’s entire term until his assassination more than five months ago, former opposition leaders never could come to an understanding, despite many attempts to hammer out political agreements, resulting in successive failures to overthrow the fiery head of state after four years of relentless struggle. Finally, they were delivered from their dysfunction by a miraculous and sophisticated plot with international dimensions. Jovenel Moïse was gruesomely assassinated on Jul. 7 and is no more.

But, curiously enough, even after the plot’s success, there remains a power vacuum until today, and Jovenel Moïse’s antagonists still have not found a way to get along. Far from it. Haiti is still adrift even as the keys to the Prime Minister’s office and the state ministries are held provisionally, and quite disputedly, by some of the former opposition leaders who have always dreamed of this opportunity.

The pre-assassination accords all came to naught. After Jul. 7, the former opposition leaders relaunched their accord-making machinery, but still are wrangling. No one can count all the agreements and counter-proposals that have been put on the table in order to find a consensus in the framework of a “transition” brought about by the very people who are now tearing each other apart for power. The Transition has therefore come faster than expected in that President Moïse neither relinquished nor was ousted from power by the opposition. Instead, he was killed performing his duties. So how do you fill the void with so many actors who have contributed for some of them, directly or indirectly, to creating this unexpected void? The shrewdest, or at least the most in a hurry, especially those who betrayed their conviction, rushed into the arms of their former enemies, who in turn received a helping hand from fate.

Groups like André Michel’s Democratic and Popular Sector (SDP) adhered without asking any questions to a text, an “Agreement,” to which they had no original contribution. When they arrived, everything was ready. All they needed was to sign it.

To clear their conscience, they embraced this Accord with both arms, as if they were its authors. They have become more royalist than the king, defending it vigorously. Some consider them to be traitors to the cause i.e. of changing the system which they have always claimed to want to end. The deal they defend is the September 11th  Accord, known as the “Prime Minister’s Accord.” Its principal drafter, Prime Minister a.i Ariel Henry, appears to some today to be the one holding the branch that allows those who betrayed the opposition’s cause to still be relevant. But, for these traitors, it’s the beginning of the end. They themselves brought the last nails for their coffins.

Then there is the other big coalition, that built around the so-called “Montana Accord.” Clearly, its adherents are more cautious and aim to stay politically alive, unlike those that decided to commit political suicide by swallowing the Prime Minister’s Accord. But, within this great alternative movement, things are not that simple.

Here, we return to the issue of managing political agreements in Haiti with political actors and leaders who do not know how to manage their ambition. There is always a moment at which an Accord can overturn unity and even create division, which can be dangerous for all the actors and the Accord itself. With the Montana Accord, we are at a moment where the impatience of some players has begun to cause serious problems for others, an attitude that may threaten the very future of this Accord. However, if this should happen, it will be an unexpected victory for the opposing camp, that is to say the coalition currently ruling under the leadership of Prime Minister Ariel Henry, assisted by lawyer André Michel.

Over the past two weeks, some people responsible for the Montana Accord, in the absence of any concrete results on the application of the said Agreement, have been making statements which may lead to internal divisions or even to the unraveling of everything that was agreed to at Pétionville’s Montana Hotel on Aug. 30, 2021 with a view to establishing a Transition more or less acceptable to a large majority of the population. On several media in the capital, some of the political leaders who signed the Montana Accord started to test the waters of public opinion (and, why not? the Core Group) by citing the names of personalities who would be interested in becoming President or Prime Minister of the Transition within the Accord’s framework. The first to announce to the press the names of the possible candidates for these positions was former senator Steven Benoit who, himself, is apparently a candidate to become one of the Transition’s leaders.

On Radio Vision 2000 and other media, including Le Nouvelliste, Benoit, without mentioning his own name, cited the names of economist Fritz Alphonse Jean, former National Assembly President Edgard Leblanc-Fils of the OPL (Struggling People’s Organization), and Dr. Jean Enold Buteau, leader of the Movement Party for National Reconstruction (MNR), as likely candidates for the posts of President and Prime Minister.

“There is no candidate yet,” Benoit said, “But there are four people identified by the Political Forum as potential candidates for the presidency or the prime minister.”

This statement was then confirmed by the representative of the Lavalas Family Political Organization (FL) within the bodies responsible for organizing the election of the two heads of the executive as provided for in the Montana Accord.

“At the Montana Accord Monitoring Office, candidates are beginning to show their interests to take part in the second-degree elections that the supporters of the Montana Accord intend to carry out, ” said Leslie Voltaire to Télé 20 on Wed., Dec. 1, 2021. Admittedly, according to a rather complex procedure, the potential candidates must express their desire to participate in an internal election to access these most senior positions of the Transition. But, to achieve this, the Accord provides for a whole set of bodies that must be put in place well before reaching this crucial point: CNT (National Council of the Transition); BSA (Agreement Monitoring Office); OCT (Transition Control Body); Representative committee; two Forums (Political Parties and Civil Society); CRSHC (Commission for the Search of a Haitian Solution to the Crisis); etc. All these bodies and structures took a long time to be created, according to the signatories. But, it is clear that there is a delay in getting them organized. Hence the skepticism of some and the doubt of others about the ability of the Montana crew to compete with the September 11 Accord, which is already in power.

Following the statements of Benoit and Voltaire, ex-President Jean-Bertrand Aristide’s FL denounced the leaking of names a few days later. Indeed, seeing that some Montana members were trying to position themselves, or even begin to campaign in the media, even though all above mentioned bodies had not yet been set up, FL officials cried foul, and even pointed to a conflict of interest. The party sent to the members of the Accord Monitoring Office a letter in which they expressed their great concern, asking them to “Guarantee the respect of the Aug. 30, 2021 agreement for the success of a Transition of rupture” with the old order. The Lavalas Family’s Executive Committee wrote:

“Having learned from the press (Le Nouvelliste of Nov. 30, 2021) that the Montana Accord Political Forum has identified four potential candidates for the posts of President and Prime Minister of the Transition, the Lavalas Family political organization, signatory of the Montana Accord, informs that it did not participate in this process of identifying political party leaders to lead the Transition. That in accordance with the wishes of the population, the Lavalas Family has, since November 2018, advocated a Transition of rupture with a government of public salvation composed of upright, competent and non-partisan personalities, coming from different sectors of the country and the diaspora , which will focus on working for the well-being of the population. This Transition of rupture must, among other things, make it possible to put in place the conditions for the realization of free, honest and democratic elections in which all political parties will be invited to participate. The exceptional situation that the country is going through does not give us the right to make mistakes: The choice of leaders of political parties to lead the Transition and, in particular, to organize the elections in which their own political structures will participate, in fact creates a situation where there is a conflict of interest: the objective is to have a Transition led in an impartial and non-partisan manner.”

The statement was signed by the four Executive Committee members who have been leading the party for some time: Dr. Maryse Narcisse, Anthony Dessources, Joël Vorbe, and Dr. Jean Myrto Julien. The FL’s warning was not trivial. Far from it, insofar as this party is always very reluctant to take part in any political alliance. It prefers to go it alone usually. It was already unusual that the FL had agreed to endorse and sign the Montana Accord as part of the future post-Jovenel Moïse Transition. The presence of this political organization undoubtedly brings added value to the approach of the designers of the Montana Accord. Dr. Maryse Narcisse’s team embraced the Accord so much that she even delegated one of their own, Leslie Voltaire, to join the Accord Monitoring Office (BSA), one of the structures put in place to appoint future leaders of the Transition. That’s a first!

Hence the conciliatory tone of the BSA’s response once it received the Lavalas Family’s letter. Ms. Ginette Cherubin replied: “On behalf of the Accord Monitoring Office (BSA), we want to reassure everyone that we are not yet in a position to know the four candidates nominated by the Political Forum. The process is underway. The Agreement established a procedure for nominating candidates. This process, which should allow us to know the candidates, has not yet been set in motion. No sector has yet nominated candidates.”

In any case, the FL’s riposte against these candidacies supposedly supported and encouraged by the Montana Accord’s Forum of Political Parties raises fears for the future of the coalition, which is already having great difficulty in realizing its ambitions in the face of the supporters of the Prime Minister’s Agreement who have consolidated their hold over the country’s institutions and administrations over the past five months.

Some saw the specter of division within the Forum of Political Parties and Civil Society looming on the horizon even before the leadership of the “Transition of Rupture” was appointed. But with the establishment on Sun., Dec. 12, 2021 of the CNT (National Council of the Transition) of 44 members, this entity responsible for electing the two heads of the executive power, hope has returned and optimism has replaced pessimism among signers of the Montana Accord.