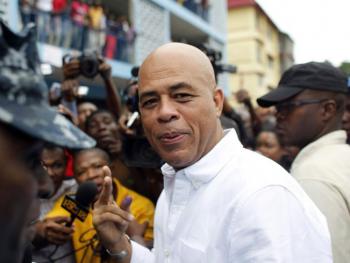 A controversial concert scheduled for Friday night in Montreal by former Haitian president Michel Martelly has been called off at the last minute.

The show's promoter, Carl-Edward Osias, confirmed the cancellation to The Canadian Press.

Osias did not want to explain the reasons behind the move, saying he would leave that to Martelly.

Critics of Martelly, who performs as Sweet Micky, had called on municipal and federal authorities to block the show, citing what they say are his misogynistic comments and his alleged complicity in corruption scandals.

Martelly had a singing career before entering politics. He served as president of Haiti from 2011-16.

Osias said earlier this week that protests against the concert were being fuelled by Martelly's political opponents and those who don't understand that Sweet Micky is a stage persona.

A group of Haitian Montrealers is appealing to federal and municipal authorities to block an upcoming concert by former Haitian president Michel Martelly, citing what they say are his misogynistic comments and his alleged complicity in corruption scandals.

As part of the campaign, women’s groups sent a letter Monday asking Montreal Mayor Valerie Plante to use “all your political power” to block a concert this Friday by the former leader, a popular singer who performs as Sweet Micky.

“Michel Martelly, alias Sweet Micky, a notorious misogynist who is an apologist for rape, is scheduled to come perform on stage in Montreal on March 22,” reads the letter, which is signed by seven groups, including the community organization Maison d’Haiti.

“This situation is even more worrying due to the fact that the regime currently in power in Port-au-Prince, accused of corruption and repression, is the heir of the party of Martelly, an ex-president of Haiti whose administration is also implicated in the corruption scandal and misappropriation of funds that is currently rocking the country,” it continues.

Marie Dimanche, a member of Montreal’s Haitian community, says the singer has no place performing in Montreal.

Dimanche recently founded the support group Solidarite Quebec-Haiti in response to anti-government protests in Haiti over the rising cost of living and the alleged disappearance of billions of dollars from PetroCaribe, an oil subsidy program intended to help the impoverished Haitian people.

While nobody has been charged, a Haitian Senate investigation has alleged embezzlement by at least 14 former officials in Martelly’s administration.

In a phone interview, Dimanche said Martelly is well-known for his sexist and degrading comments directed at women, some of which have promoted sexual assault. “The things he says are degrading, violent towards women,” she said in a phone interview.

“I’m not particularly in favour of censorship, but hateful speech that calls for violence towards a group of people — half the population — I feel it’s not acceptable.”

Dimanche and her group are hoping Plante will declare that Martelly is not welcome in Montreal, as former mayor Denis Coderre did in 2016 with the French comedian who performs as Dieudonne. Dieudonne, who has been charged multiple times in Europe with hate-speech violations, flew to Canada but returned to France shortly after without performing, leading to speculation that he was turned back by immigration authorities.

“We think there’s a good chance that (our plan) works, because Valerie Plante is sensitive to questions of women’s rights, and I think she will be sensitive to the question,” Dimanche said. An official in Plante’s office said Monday he needed time to look into the matter.

If Martelly is allowed to enter, Dimanche says her group will protest outside the downtown venue in an attempt to stop the show.

In an interview last week, Osias, president of Bass-Mint Management Group, said Sweet Micky’s Montreal shows were well-attended in the past, both before and after his stint as Haiti’s president from 2011-16.

He said the Montreal protest is begin fuelled by Martelly’s political opponents and those who don’t understand that Sweet Micky is a persona known for outrageous antics. “He’s a provocateur,” Osias said. “He’ll wear a skirt. He’ll say stupid things. He’ll make jokes. He’s an artist who provokes, who creates controversy.”

He says he has no problem with people protesting but doesn’t think it’s right for them to try to block the show, which he has no intention of cancelling.

Martelly was accused more than once of using coarse and sexist language during his tenure. A sexually charged comment he made to a female critic at a campaign rally in 2015 prompted a politically allied party to announce the resignation of three officials from Martelly’s administration, including the minister for women’s affairs.

And just before leaving office, he released a pop song jeering at his critics and aiming sexually suggestive lyrics at award-winning female journalist and human rights advocate Liliane Pierre-Paul. The song, titled Bal Bannann Nan — Haitian Creole for “Give Them the Banana” — featured Martelly and backing vocalists repeatedly singing suggestive lyrics while referring to bananas and Pierre-Paul.

Dimanche and Osias disagree about whether there are more Sweet Micky fans or critics in Montreal’s Haitian community of 132,000, including over 75,000 who were born in the Caribbean country. Osias believes the fans outweigh the critics; Dimanche hopes the opposite is true.

“I think if people knew who he was, we would be very numerous in having this opinion,” she said.

Quebec sociologist Frederic Boisrond wrote to Prime Minister Justin Trudeau and several cabinet ministers in January, asking them to block the entry of the singer, whom he described as “misogynist, violent, and dangerous.” Martelly’s rhetoric “openly apologizes for rape, normalizes and glorifies violence against women,” he said in his letter.

Boisrond said representatives from Trudeau’s office, as well as those of Foreign Affairs Minister Chrystia Freeland and Public Safety Minister Ralph Goodale, wrote back to say they were studying the issue, but the final decision lies with Immigration Minister Ahmed Hussen.

Hussen’s office said it could not comment on specific cases without the consent of the individual.