Montreal turns stadium into welcome centre for asylum seekers from US 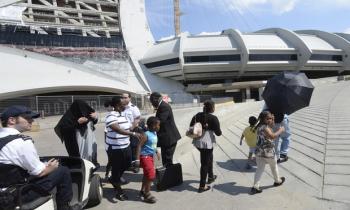 A recent surge in asylum seekers arriving from the United States has prompted Canadian authorities to open a temporary welcome centre in one of Montreal’s best-known landmarks.

Since the start of the year, the numbers of asylum seekers entering Canada from the US has soared. More than 4,000 of them – many of them driven by fears of Donald Trump’s crackdown on immigrants – have entered Canada at remote, unguarded locations along the border. By doing so, they aim to skirt a 2004 agreement between Canada and the US that forces most migrants to apply for asylum in the first country in which they arrive.

In recent months, the province of Quebec has become a major entry point. More than than 3,300 asylum seekers have crossed into the province from the US, sending authorities scrambling to set up additional welcome centres.

On Wednesday, the province began bussing asylum seekers – who including children and pregnant women – to the site of its latest welcome centre: Montreal’s Olympic stadium, a 56,000-seat arena normally used for sporting events, rock concerts and trade shows.

An estimated 1,174 asylum seekers arrived in Quebec in July, said Francine Dupuis, who heads a government-funded program that helps refugee claimants navigate their first weeks in the country.

“We’ve never seen this before,” Dupuis told Radio-Canada. “It’s really quite a bit more intense than what we’re used to.”

Most in the latest group are from Haiti, said Dupuis. “It’s a community that feels as though they’re in a fragile situation in the United States,” she added.

In May, the Trump administration threatened to pull the plug on a longstanding humanitarian program, potentially exposing as many as 58,000 Haitians to deportation.

John Kelly, the then homeland security secretary, eventually allowed for a six-month extension to the program, which gives Haitians in the US temporary protected status (TPS) as their country recovers from a series of disasters including the 2010 earthquake, a cholera epidemic and Hurricane Matthew. But Kelly warned those granted TPS not to assume it would be renewed again.

“This six-month extension should allow Haitian TPS recipients living in the United States time to attain travel documents and make other necessary arrangements for their ultimate departure from the United States, and should also provide the Haitian government with the time it needs to prepare for the future repatriation of all current TPS recipients,” Kelly said in a statement.

On Wednesday, the mayor of Montreal, Denis Coderre, welcomed the migrants in French and Haitian creole. “The city of Montreal welcomes the Haitian refugees,” he wrote on Twitter. “You can count on our full cooperation.”

Dupuis pointed to Montreal’s large Haitian community to explain why many migrants had opted to cross into Quebec. “Obviously there is a stronger attraction to coming to Quebec for Haitians than in other provinces,” she told Radio-Canada.

Her organisation usually relies on the YMCA – whose centres offer about 600 beds – to temporarily house newcomers, but the increase in migrants in recent weeks forced them to seek out additional space.

It took just 24 hours for the stadium – built in the 1970s as a venue for the city’s 1976 Olympics – to be converted into a welcome centre where the asylum seekers will be sheltered and receive help in finding housing and completing paperwork related to their asylum claims.

So far, 150 cots – arranged neatly into rows among the concrete walls of a windowless area in of the stadium – have been set up, along with access to showers and a cooking area.

The stadium could hold as many as 450 beds for asylum seekers if demand remains high, said Dupuis. Most are expected to spend only a few weeks in the centre before moving into longer-term housing while they wait for their claims to be heard.