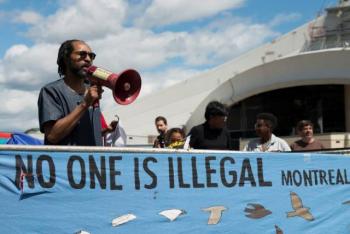 On August 6, approximately 300 people attended a rally outside the Olympic Stadium to welcome refugees to Montreal.

The rally, named the “Rassemblement de bienvenue aux réfugiés haïtiens” (Rally to welcome Haitian refugees)  was organized as a counter-rally to a planned event by Quebec-based white supremacist groups La Meute, Storm Alliance, and Soldiers of Odin. This anti-immigrant rally was canceled less than 24 hours before it was scheduled to begin. As of 4pm August 5, the event had only attracted 29 attendees on Facebook.

Several people spoke at the event including: Maguy Métellus, a Montreal-based radio host; Jean Saint-Vil, an Ottawa-based Haiti Solidarity activist and Radio host; Serge Bouchereau, a Montreal based community organizer; Jaggi Singh, an activist and organizer for No One is Illegal Montreal, and Claire Fatima Oriol, a Haitian refugee facing deportation.

The event attracted a diverse crowd of Montrealers. Including members of the Haitian community, families, anti-fascists, solidarity activist, and Québec NDP MP Alexandre Boulerice. Signs for Québec Solidaire were also visible in the crowd.

The speakers demanded that the Quebec government welcome refugees fleeing the United-States. The organizers and attendees shared a common message for leaders in Quebec and Canada: Refugees are welcome and no one is illegal.

Estimates are that approximately 90% of refugees fleeing across the border to Quebec are Haitian.

Political opportunism and the plight of Haitian refugees in Canada

Denis Coderre, Montreal’s Mayor who is up for re-election in November, recently declared that Montreal is a “Sanctuary City”. Coderre is under scrutiny for multiple conflicts of interest and overspending on projects.

Why are Haitians fleeing?

Haitian refugees fear being deported back to Haiti for many reasons, including extreme poverty, cholera, and an ongoing economic crisis. Haiti’s new President, Jovenel Moise, has been accused of money laundering and political corruption.

Moise’s recent actions virtually mirror those of US President Donald Trump’s reaction to investigations of corruption. On July 6, Moïse illegally fired for the second time Sonel Jean-François, the director general of the Central Financial Intelligence Unit (UCREF), an office set up in 2001 to investigate money-laundering.

Haiti continues to suffer the consequences of the UN’s occupation under MINUSTAH. MINUSTAH is the occupying force that was installed after Jean Bertrand-Aristide, the democratically elected president, was removed from power in a coup in 2004. The coup was supported by the governments of Canada, the USA, and France.

MINUSTAH’s mission will end in October, 2017. They will be replaced by a smaller UN force as President Jovenel Moise build’s a new army.

An end to a long journey?

Many of the Haitian refugees who have applied for asylum have endured a long journey. After the 2010 earthquake that devastated Haiti’s capital, Port au Prince, many Haitians fled to Brazil to seek work.

In 2015, Brazil experienced an economic downturn and Haitian migrants found themselves out of work. They migrated north to the Unites-States.

Recently, Donald Trump declared he would deport all Haitian refugees. This forced Haitian refugees over the border into Canada. According to a Reuters report, more than 50,000 victims of Haiti's 2010 earthquake have been living in the U.S. under "temporary protected status" for the past seven years.

Quebec Immigration Minister Kathleen Weil said Thursday that the province is getting as many as 150 refugee claims a day. Most are Haitians fleeing Donald Trump’s threats of deportation. Others come from countries like Burundi and Syria.