Montreal's Haitian community calls on president to step down, Canada to step up 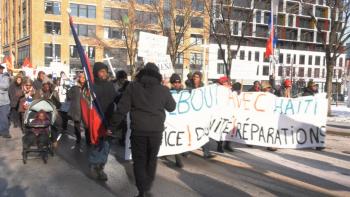 As protests continue to rage in Haiti over government corruption and the cost of fuel members of the Montreal Haitian community gathered to demonstrate in solidarity on Sunday.

“I feel I cannot just stay idle and do nothing,” she said. “I feel responsible to do something since I’m here.”

Many protesters called on Haitian president Jovenel Moise to step down. Moise has been accused of embezzling millions of dollars in public funds and the country has suffered through fuel shortages since his election.

Solidarite Quebec-Haiti spokesperson Marie Dimanche said the only solution is a change of government.

“They want a change of system because they don’t want another puppet that is just at the service of the U.S., Canada and France,” she said. “They want somebody who is really there for the people.”

Since the protests started at least 20 people have been killed and hundreds more injured. For demonstrators like Jennie-Laure Sully who have family in the country the situation has been tense.

“It’s really hard to move around, the roads are blocked,” she said. “Most of the time people just stay home.”

Dimanche said the Canadian government has a duty to step up.

“We want the Canadian government to publically say this government should get out of Haiti and that the Haitian people should be heard,” she said.

Global Affairs Canada did not respond to a request for comment by deadline.