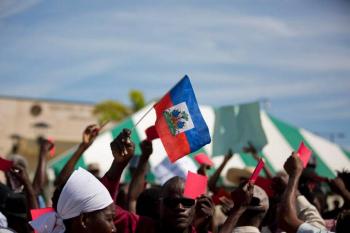 A group of hundreds of immigration advocates, media personalities, human rights activists and representatives of international nongovernmental organizations on Tuesday called on the Biden administration to re-designate Haiti under the Temporary Protected Status (TPS) program.

In a letter addressed to President Biden, Vice President Harris, Secretary of State Antony Blinken and Secretary of Homeland Security Alejandro Mayorkas, the group laid out a dire portrait of conditions in Haiti.

"With an increasingly authoritarian president who has been ruling unconstitutionally without a parliament for over a year, now claiming his mandate extends through January 2022, and with well-attended daily protests in response, the political situation is unstable, fragile and extremely dangerous," wrote the advocates.

Haiti was originally designated for TPS in 2010 following an earthquake that killed more than 300,000 people in the country.

Like many TPS designations, which must be renewed at least every 18 months, the Obama administration issued more or less summary renewals until the Trump administration in 2017 announced it would end Haitian TPS in mid-2019.

Court injunctions blocked Trump's termination of TPS, leaving the program's estimated 55,000 remaining beneficiaries in uncertain territory, until a new designation is issued or the underlying conditions of TPS are changed by Congress or the judiciary.

A re-designation of Haitian TPS would protect the existing TPS beneficiaries, plus any Haitian nationals who have arrived to the United States since the last designation in 2017. By most estimates, the number of protected Haitians would more or less double under a new designation.

While campaigning in South Florida in 2020, President Biden promised to review Haiti's TPS designation, and to stop deportations to the country.

More than 300,000 Haitian Americans are registered to vote in Florida, and that community has close ties to the Haitian documented and undocumented immigrants who would be most affected by a TPS designation.

Still, Biden has avoided a TPS designation for Haiti, while issuing designations for Venezuela, Myanmar and Syria.

Nicole Phillips, legal director of the Haitian Bridge Alliance, which coordinated the letter, said Haiti's TPS designation should have been considered on par with Venezuela's.

"Since 2018, the nationwide unrest and political turmoil has deteriorated. In January 2020, the mandates of all but 10 members of Parliament and all mayors terminated due to delayed elections, leaving President Jovenel Moïse to run the country without legislative oversight and in violation of the Haitian Constitution," wrote the letter's co-signers.

And the Biden administration has been gun shy in issuing designations that expand the number of foreign nationals allowed to live and work in the United States.

Biden angered Democrats and immigration activists when the White House announced it would maintain a Trump-era cap of 15,000 refugees for fiscal 2021, a decision that was quickly retracted, and many pro-immigrant groups are nonplussed at the administration's reluctance to issue all the temporary worker visas made available by Congress.

"On the immigration front they've just been really conservative up until now," said Phillips.

Mayorkas, under whose purview it is to propose TPS designations to the White House, pushed back against the idea that the Biden administration isn't opening all available legal avenues to migrants.

"We are very much prioritizing the legal pathways so that once again irregular migration is not viewed as the only avenue or an avenue to reach the United States," Mayorkas said on a call with reporters on Tuesday.

Still, advocates have not received a response on why the administration is holding back on the Haitian TPS designation, a move that on its face would seem a repudiation of Trump's draconian approach to regional migration.

And the fact that Trump called majority-Black Haiti a "shithole country" angered the U.S. Black community, which sees in the historical treatment of Haiti another example of global anti-Black racism.

Among the letter's signatories are the Rev. Jesse Jackson and Black Lives Matter founders Opal Tometi and Alicia Garza.