‘Mountains beyond mountains’: How human waste can be transformed into safe and useful resources 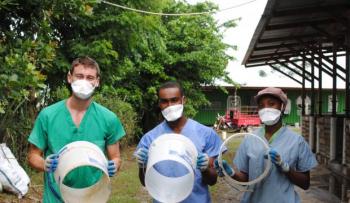 I arrived in Juneau last summer with mixed emotions. I was excited to start a new life in Southeast, but I’d also just left behind a project I cared a lot about.

Inspired by the book “Mountains Beyond Mountains” by Tracy Kidder (2003), I’d joined a research project after finishing my PhD to study the operations of an organization called Sustainable Organic Integrated Livelihoods (SOIL), that provides an innovative sanitation service to communities in Haiti. I spent several months in Haiti, experienced SOIL’s work first-hand, and befriended an international team who are showing that human waste (that’s right, poop!) can be transformed into safe and useful resources. My work in Haiti ended last summer, but I’ve since discovered that there are similar unmet sanitation needs here in Alaska.

Ecological sanitation (EcoSan) involves changing the way we think about flows of waste materials from linear paths, into cycles. This shift isn’t new. We’ve done it in the context of industrial waste, glass and aluminum recycling, and increasingly for food waste composting. EcoSan extends the principle a little further and recognizes that human waste contains water, energy, carbon and nutrient resources too. EcoSan, as with other recycling, isn’t a one-fits-all approach. EcoSan solutions can draw on different technologies to achieve the same goals of nutrient recapture, energy production, and water use reduction. However, one barrier to implementation is the fact that EcoSan solutions, as with sanitation generally, have a public perception problem.

People don’t want to talk about human waste. Poop carries with it a certain stigma — referred to by sanitation geeks as the “ick-factor” — which crosses cultures globally, rich and poor. This reaction has plenty of rational basis. Untreated human waste can contain unhealthy pathogens, and can smell pretty bad too. But the “ick” response can also be misguided, reactionary and even harmful, when it blocks implementation of smarter sanitation options, or where our collective embarrassment means we end up flushing the whole conversation down the toilet.

To say this taboo is harmful is not hyperbole. In international development sanitation was, for decades, subsumed within the more palatable objective of increasing access to clean water. By 2015, about 91 percent of the world’s population had access to improved drinking water while access to improved sanitation had stagnated around 60 percent (See attribution below). The excellent book “The Last Taboo” (Black & Falkner, 2008) provides the whole scoop on the ways that taboos around human waste have led us to the global sanitation crisis. Around 2 million people — mostly women and children — still die each year from preventable diarrhea.

Most people lacking improved sanitation live in rapidly growing informal settlements in the developing world. SOIL Haiti’s operation near the city of Cap-Haïtien primarily serves those in the poorest slums, such as Shada, a neighborhood that forever altered my perception of the expression “concrete jungle.” However, the principles of ecological sanitation that drives SOIL’s work are universal, and the last few months have affirmed this as I’ve learned about water and sanitation in Alaska.

A substantial amount of work has been undertaken to describe, and start to address, the sanitation disparities on the Last Frontier. About 18 percent of rural Alaskans do not have improved sanitation. Within those households, children’s health outcomes are poorer, and rates of respiratory infections are higher. Conventional piped and water-based systems are costly, especially in permafrost. One piped installation in Buckland was estimated to cost around $500,000 per household. These facts lead me to ask whether EcoSan principles have been, or could be, explored here in Alaska?

In Haiti, SOIL combines dry household bucket toilets (container-based sanitation) with composting of the collected material at a separate facility. Their sizable operation employs local people and produces a sanitary, sellable, compost fertilizer. SOIL’s services have grown successfully in a country where improved sanitation access sits around 28 percent, where flooding can make a movable bucket toilet very handy, and where soil erosion has reduced agricultural fertility. EcoSan in Alaska would look very different — freezing temperatures present new challenges — but the sustainability of remote villages may benefit from locally defined solutions that can recycle nutrients, conserve liquid water for drinking, and even produce heat.

Dr. Gavin McNicol is a postdoctoral fellow at the University of Alaska Southeast and lives in Juneau. “Sustainable Alaska” is a monthly column, appearing on the first Friday of every month. It’s written by UAS Sustainability Committee members who wanted to promote sustainability. The views expressed here do not necessarily represent the views of the University of Alaska Southeast.