Mr. Trudeau, tell us how you decide which invasions count 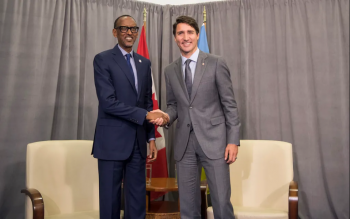 In a world of vast injustice, one cannot expect a government’s foreign policy to be principled or consistent. But there should at least be some limit to hypocrisy.

On June 16 Justin Trudeau spoke with Rwandan president Paul Kagame about this week’s Commonwealth Summit in Kigali. Half the government’s readout about the discussion was devoted to opposing a foreign invasion. It read, “the two leaders exchanged views on Russia’s invasion of Ukraine and noted that the invasion was contrary to foundational principles of the Commonwealth. Prime Minister Trudeau reiterated that the invasion was an affront to the fundamental principles of sovereignty, territorial integrity, self-determination, and international law, and expressed that it is important for the Commonwealth summit to provide an opportunity for member countries to stand up for democracy and denounce Russia’s invasion of Ukraine.”

Recently, Rwandan-backed rebels instigated fighting that has caused over 170,000 Congolese to flee their homes since November. Reportedly, Rwanda has deployed 500 troops to assist the M23 rebels. According to the UN, M23 is planning an attack on the major eastern city of Goma in the coming days. On Friday Rwandan forces killed a Congolese soldier on the border between the two countries and Congo has closed the border.

Highlighting the hypocrisy of Trudeau discussing foreign invasion with Kagame, former Congolese presidential candidate and long-time UN worker, Angèle Makombo, tweeted, “No kidding Prime Minister Justin Trudeau, you spoke with Paul Kagame about ‘Russia’s illegal invasion of Ukraine’? Did you also care about raising the issue of Rwanda’s aggression of Congo and its dire impacts on the Congolese people and Africa Great Lakes subregion?”

The M23 is a “Rwandan sponsored” force, reported the Globe and Mail previously. A 2012 UN report concluded that officials in Kigali organized, armed and “coordinated” M23’s military activities in the mineral rich eastern Congo. The M23 is the successor to the Rwanda-backed rebel force lead by Laurent Nkunda, who grew to prominence after Rwanda invaded.

In 1996 Rwandan forces marched 1,500 km to topple the regime in Kinshasa. Two years later they re-invaded after the Congolese government it installed expelled Rwandan troops. This led to an eight-country war between 1998 and 2003, which left millions dead. A January 2008 study by the International Rescue Committee blamed the conflict and its destabilizing impact for 5.4 million Congolese deaths over a decade. In October 2010, the UN Office of the High Commissioner for Human Rights released a report on the Congo spanning 1993 to 2003 that charged Rwandan troops with engaging in mass killings “that might be classified as crimes of genocide.”

Aside from the mayhem he’s unleashed in the Congo, Kagame oversees a brutal dictatorship. Opposition media is entirely suppressed and opponents rot in jail. Top officials and other dissidents that flee have repeatedly been assassinated across east and southern Africa. A year and a half ago, the regime kidnapped its most famous opponent Paul Rusesabagina, who is the namesake for the Hollywood film Hotel Rwanda. A Belgian citizen and US Green card holder, Rusesabagina was snatched from Dubai and flown to Rwanda where he languishes in jail.

Trudeau’s dalliance with Kagame isn’t new. In 2018 Toronto-based Rwandan dissident David Himbara wrote, “the romance between the two and among their respective ministers has blossomed beyond belief.” In February 2020 the PM’s press people released a photo of him laughing with the Rwandan president. On at least five occasions since 2018 Trudeau has been photographed with Kagame during one-on-one meetings on the sidelines of different international summits. At one of those meetings the PM “affirmed the importance of strong and growing bilateral relations” between Canada and Rwanda. Ottawa provided $39 million in assistance to Rwanda last year.

While the media, opposition and government have spent much of the past week complaining/apologizing about a low-level Canadian diplomat attending an irrelevant social function put on by the Russian Embassy, the prime minister deepens Canada’s ties to Africa’s most bloodstained ruler.

For Trudeau it appears as if only invasions of European countries matter.

As Kagame renews his brutal war on the Congo, Trudeau wants us to believe his aim is to uphold international law and oppose foreign invasion.

The hypocrisy is staggering.

On Monday’s Canadian Foreign Policy Hour I will discuss Trudeau’s visit to Rwanda with Canadian journalist Judi Rever, author of In Praise of Blood: The Crimes of the Rwandan Patriotic Front.