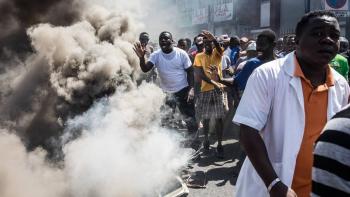 Protesters, medical professionals, and political opponents walk past burning trash during a demonstration demanding the resignation of President Jovenel Moise in the Haitian capital in Port-au-Prince on Oct. 30, 2019. In the midst of the crisis, an attempted jail break resulted in the rape of 10 women detainees, human-rights groups say. VALERIE BAERISWYL AFP VIA GETTY IMAGES

It started around noon, when male detainees inside a prison for men and women north of Haiti’s capital heard there was no charcoal or propane gas to cook their food, and began violently protesting prison conditions and attempting to escape.

By the time it was over and the jailbreak had been stopped by Haiti National Police, at least one inmate was dead, several others had been injured and 10 female detainees, including a 15-year-old teen girl and 62-year-old woman, had been gang raped, two Haiti-based human rights groups said.

Accusing the government of being irresponsible and neglectful in its mission to protect detainees in its custody, the National Network for the Defense of Human Rights and the Solidarite Fanm Ayisyèn are demanding an investigation into the Nov. 7 incident inside the Gonaives Civil Prison, and are calling on Haitian authorities to identify and prosecute everyone involved in the alleged rapes.

The human-rights groups are also demanding that medical, psychological and social assistance be given to the victims, and for prisons exclusively for women to be constructed in the country.

Late last week, prosecutor Sérard Gazius told The Associated Press that the incident was under investigation. He said that more than 50 men had broken out of their cells and overpowered prison guards. Gazius said authorities did not yet know how many inmates were suspected of raping the women, who were being held in separate cells in the same facility.

“The chilling facts that occurred at the Gonaïves Civil Prison, where women as well as the underage girl were left to be fed to the detainees to be raped, reveal the failure of the state authorities in their responsibility to ensure the safety of the detainees.,” the human-rights groups concluded after their own investigation.

In a 10-page report issued Thursday on the incident, the groups said the women, who remain in shock, have since been relocated to other facilities.

Haiti’s prison conditions, already difficult before the recent waves of anti-government protests shuttered the country, have only been made worse by the crisis, the report said. Inmates inside the Gonaives prison, for example, not only faced a shortage of food but they had been told that they could not receive visits from family. Among the victims themselves, only two had been sentenced by a judge. The others were in prolonged detention.

In a separate report issued just one day before the incident, the human rights defense network warned that food shortages in the country’s prisons could exacerbate already existing tensions.

“This could have been avoided,” said Marie Rosy Auguste Ducena, who is responsible for programs at the human-rights defense network.

Ducena said 10 women confirmed to human-rights investigators that they had been raped.

“They told us the men were fighting among themselves to see who would go first,” Ducena said. Local nonprofits, not the government, provided the women with assistance including antiretroviral medicines, in case they had been exposed to HIV, and treatment against pregnancy.

In Haiti, it is not unusual for men and women to be detained in the same jail but in separate cells. There is just one women’s prison in the country and it is located in the city of Cabaret between Gonaives and Port-au-Prince. The civil prison in Gonaives at the time of the incident housed 329 prisoners and had just two prison guards assigned to it. There are also at least two Haiti National Police officers on site.

During the violence, the officers “merely locked the doors” in order to prevent the escape of the male prisoners who eventually smashed the lock on their doors and exited their cells. They then went to where the females were being kept, and gained access to their area.

Ducena said after ending the attempted jail break by firing tear gas inside, the prison guards and police did nothing to intervene. During the incident, an officer also had his gun seized by a detainee when he pointed it through the wire of a window and fired it in the air to try to calm things down. The prisoner then fired two rounds at the agent, who injured his hand while trying to quickly remove it from the window.

Ducena said the officers were only interested in preventing a prison break.

“They knew that women were being held in the same place and they allowed them to spend the entire day together and night together,” Ducena said. “They did nothing before this to intervene and allowed it to degenerate to this.”

Ducena said the gang rape came to light when the prison was finally opened the next day in the presence of a judge. As the prisoners filed out of the jail, some reported the rapes.

According to the report, prisoner Rodeney Lamour was killed during the mutiny, his corpse buried by the mayor of Gonaives without the knowledge of his parents. “No autopsy was carried out to determine the circumstances of his death,” the report said.

The rapes perpetrated by the prison detainees, the report said, were “a form of torture against the victims.”

The report also asks that food and propane gas, as well as medicine, hygiene kits and cleaning supplies, be replenished in all of the country’s prisons.