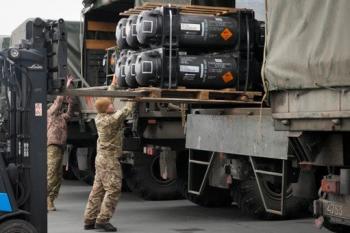 Covert Action Magazine recently published an essay written by myself  that was titled ‘Calls by Western socialists for a Russian retreat from Ukraine amount to de facto support for NATO aggression‘. In the essay, I introduced the term ‘NATO socialists’ to describe what I called “left-wing writers and thinkers in Western countries who demand that Russia renounce its six conditions for peace in Ukraine and withdraw its military forces from the country.”

I wrote further: “NATO socialists dismiss or ignore altogether the concerns of Russia over the expansionism, militarism and sanctions of the NATO alliance. Remarkably, these concerns by Russia were most recently detailed and published by Russia’s Ministry of Foreign Affairs for the whole world to see in December 2021 in the form of a draft treaty with the U.S. that would curb NATO’s anti-Russia threats and expansion. You can read that text here on the ministry’s website.”

The term ‘NATO socialists’ and its use by me is not gratuitous, nor is it cheap slur. It is, quite literally, an accurate portrayal of what those earning the moniker themselves argue, as the following demonstrates.

An essay published in International Viewpoint on April 22 was titled ‘Why the Left Must Support Arms for Ukraine!’ It concludes with: “As writer Gilbert Achcar has noted, ‘Not a single day has passed since the Russian invasion began without the Ukrainian president publicly blaming NATO powers for not sending enough weapons, both quantitatively and qualitatively.’ Can we really say to Ukrainians: for your own good we are going to turn a deaf ear to your pleas for the means of defending yourselves?”

International Viewpoint is a web publication of the Trotskyist ‘Fourth International. Gilbert Achcar writes for the publication. He is a leading voice of anti-Russia socialists and Trotskyists.

In an April 13 essay in the U.S. Trotskyist publication New Politics, Achcar critiqued a then-recently  published commentary on Ukraine. (The commentary its writer were not named by Achcar.) Achcar wrote, “It fell short of supporting Ukraine’s resistance to the invasion, except by piously wishing it success, while refusing to support its right to get the weapons it needs for its defense. Worse still, most of the same oppose the delivery of such weapons by the NATO powers in a blatant subordination of the fate of the Ukrainians to the presumed ‘supreme’ consideration of anti-Western anti-imperialism.”

In early May, Achcar engaged in an exchange in the pages of Jacobin Magazine on the subject of NATO weapons supply to Ukraine with magazine writer Branko Marcetic. The exchange was titled ‘The left and military aid to Ukraine’. Achcar wrote: “If one is serious about countering the Russian aggression, the only effective way to do it is to support the Ukrainians’ right to get the means they need to defend their country, the defensive means that they have been begging for even before the war (emphasis added) started and that they demand more urgently each day.”

Achcar added: “The key point here is to respect the rights of the victims to decide.”

The same New Politics publication has recently published a commentary by a writer it describes as a ‘Ukrainian socialist’, who is regularly featured in the publication. Here are excerpts from that commentary:

No, ‘NATO socialism’ is not epithet or slander. It is the disquieting face of the political dead end where anti-Russia prejudice and ignorance has led disturbing numbers of liberals and former leftists in the West. It is important to understand the arguments of the NATO socialists and their political trajectory because they are an obstacle, a threat even, to the prospects for building genuine movements in the world opposed to imperialist war and militarism.

*  Calls by Western socialists for a Russian retreat from Ukraine amount to de facto support for NATO aggression, by Roger Annis, Covert Action Magazine, May 29, 2022

*  The dangerous illusions by antiwar writers positing Volodymyr Zelensky as desiring peace, by Roger Annis, A Socialist In Canada, May 11, 2022

The following are two entries posted to the ‘World news‘ headlines page of A Socialist In Canada website. Brief commentaries [in square brackets] are by the website editor:

*  Anti-Russia socialists in UK warn of ‘global famine’ caused by Russian military in Ukraine, but the world’s food agency says grain production will rise in 2022.

Two references:
1.  While Ukraine burns: why is the West prolonging the war?, article by Chris Nineham, published by Counterfire (UK), May 27, 2022  First paragraph of article: The war in Ukraine is already causing horrific suffering for the people of Ukraine. As last week’s UN food conference warned, it is now threatening to spark famine in Ukraine itself and across whole swathes of the globe…
2.  World food situation in May 2022, monthly report by the Food and Agricultural Organization (United Nations), May 6, 2022  …The forecast for world wheat production in 2022 has been scaled back moderately since the previous month, but standing at 782 million tonnes, FAO still predicts global wheat production to grow this year… The forecast for global wheat trade in 2021/22 (July/June) is now pegged at 191 million tonnes, 1.0 percent above the 2020/21 level. While blocked ports continued to hinder wheat exports from Ukraine, this month’s upward revision mainly reflects higher-than-expected exports from the Russian Federation, the Islamic Republic of Iran and Turkey… Regarding coarse grains, harvesting of the 2022 crops has started in the southern hemisphere, and prospects continue to point to above-average outputs in leading producer countries…

[For good measure, the Counterfire writer adds: “Before the war [in Ukraine] started, Russia was the biggest supplier of oil and gas to Europe and was developing a threatening alliance with the Chinese. (emphasis added) ]

*  Latest Washington Post column by Katrina vanden Heuvel, editor of The Nation, misrepresents how the conflict in Ukraine erupted. Published in the Wash. Post on May 24, 2022

[The column is titled ‘We need a real debate about Ukraine’. It opens, “As Russia’s illegal and brutal assault enters its fourth month, the impact on Europe, the Global South and the world is already profound…” It writes further, “Those who speak of history and offer context about the West’s precipitating role in the Ukraine tragedy are not excusing Russia’s criminal attack.” She proposes, “an effective cease-fire and a negotiated resolution, one designed to ensure that Ukraine emerges as a sovereign, independent, reconstructed and prosperous country.” Yes, and this was called the ‘Minsk 2’ ceasefire and peace agreement. It was sabotaged by the governing regime in Ukraine, encouraged by the NATO powers. How can the Russian government negotiate with such adversaries as the U.S., other NATO governments and the governing regime in Kyiv when they routinely ignore or tear up negotiated agreements it reaches with them? Ms. vanden Heuvel’s column does not mention that dilemma and has no answer to it.]