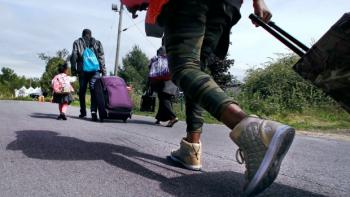 The Liberal government is misleading people when it says there's no advantage to crossing illegally into Canada to seek asylum, says NDP MP Jenny Kwan.

Prime Minister Justin Trudeau made those comments over the weekend as the Liberals have become more assertive in their efforts to tamp down the volume of asylum seekers. Nearly 7,000 have arrived in the last six weeks, mostly via Quebec. [See: 'Canada is not a safe haven for asylum seekers, Trudeau warns', Toronto Star, Aug 23, 2017.]

But in a letter to Immigration Minister Ahmed Hussen, Kwan suggests there is in fact an advantage. If they go the legal way, she says, they'll be turned away, because of the agreement between Canada and the U.S. that precludes people from making asylum claims at official land border crossings.

"Under international law, once they have crossed the border Canada must take them in and process their refugee claims," Kwan said in the letter, sent late Tuesday. "If the prime minister was serious about reducing unsanctioned border crossings, let alone truly welcoming refugees, he would have already suspended the Safe Third Country Agreement."

The Liberal government has repeatedly insisted there's no reason to suspend the deal, noting that the asylum system in the United States is still functioning and the country remains open to granting people refuge.

In her letter, Kwan points to violent clashes between white nationalists and counter protesters in Virginia earlier this month as a sign of increased insecurity for all minorities. But more so, she said, the influx of people into Canada makes it clear they no longer feel the U.S. is safe.

The government is ignoring what should be a manageable issue, she said. "Given the current trend of anti-immigration and anti-refugee rhetoric throughout the developed world, maintaining the highest degree of public confidence in Canada's immigration system should be a top priority for your government to reduce the risk of those views taking hold in Canada," she wrote.

The federal-provincial task force set up last week to oversee the surge of asylum seekers is set to meet today in Montreal. The prime minister is to take part in the meeting and will talk to Haitian community leaders later in the day.

In her letter, Kwan notes the increased volume of asylum seekers hasn't been matched so far with a single extra dollar for the settlement agencies that will eventually help absorb them.

In an interview Tuesday, Hussen said settlement funding being provided by the government is currently at historic levels and the system has the capacity to handle the demands being made by the new arrivals.

I write to you regarding the increasingly serious situation of irregular border crossings and the troubling inconsistencies between what your government has said and the reality on the ground for asylum seekers and border communities. In response to President Trump’s first attempt at his discriminatory travel ban, the Prime Minister tweeted on January 28th:

To those fleeing persecution, terror & war, Canadians will welcome you,
regardless of your faith. Diversity is our strength #WelcomeToCanada.

That tweet resonated with many Canadians, reassuring them that Canada would remain a
beacon of hope for those fleeing war and persecution. I’ll admit that I was proud of our Prime
Minister that day. Sadly, in the weeks and months that followed, my feelings changed
dramatically.

Many are now asking whether the Prime Minister was truly interested in following through with substantial action or if he was instead content with the spike in international attention and praise that came with it.