New agreements between Haiti, Venezuela and Cuba for social and economic development 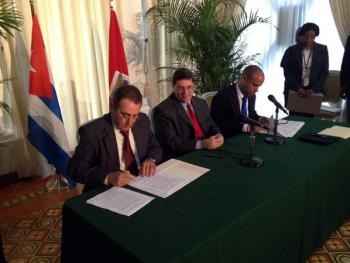 Venezuela and Cuba ambassadors to Haiti, on right is Foreign Minister Laurent Lamothe

Haïti Liberté and  Le Nouvelliste newspapers as well as Radio Tête à Tête are reporting on new agreements for social and economic development that have been reached between the governments of Haiti, Cuba and Venezuela.

Venezuela will increase the amount of fuel that Haiti can purchase under the Petrocaribe agreement from 14 million barrels per day to 20 million. Funds generated by the fuel agreement are used to finance projects in energy supply, agriculture, education, social services and tourism.

Haiti pays a discounted rate for its fuel via its membership in Petrocaribe. In practice, amounts owed are more often than not written off by Venezuela, potentially creating a crucial source of financing for government spending.

Venezuela’s cooperation with Haiti, says Vice Minister Porras, “is absolutely without conditions.” Recalling Haiti’s support to the independence struggle of Venezuela at the turn of the 19th century, Porras told reporters that the friendship between the two countries is “unshakeable and indestructible.”

The education agreement focuses on expanding a national literacy program in which Venezuela also participates. The program is an adaptation of Cuba’s successful “Yes I Can” method of literacy training. It has taught thousands of Haitians to read and write for the first time and is targeted to reach hundreds of thousands. Approximately half of Haiti’s population of ten million is illiterate.

Venezuela and Cuba will assist in doubling electricity generation at two existing power plants, in Cap Haitien, Haiti’s second largest city, and Carrefour, a district of Port au Prince. Generation will double in Cap Haitien from 15 mw to 30 and in Carrefour from 30 mw to 60 mw. Those two power stations as well as a third in the city of Gonaives were constructed with Venezuelan assistance in 2007.

Minister Lamothe said the meeting discussed installing a 15 mw station at Jacmel and two to three additional stations. Cuba will continue to assist with maintenance of mobile generator units and installation of new ones.

In efforts to stem deforestation, Venezuela and Cuba agreed to supply small propane stoves in Haiti and help plant 20 million trees. The two countries are also assisting in expanding the airport at Cap Haitien.

Talks included plans to construct 5,000 homes in Haiti “as quickly as possible,” according to Lamothe.