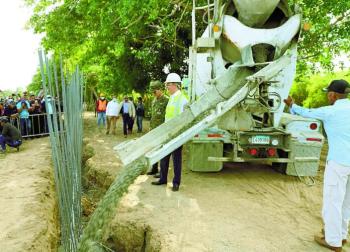 Dominican President Luis Abinader (in white helmet) poses on Feb. 22 for a photo-op at the pouring of the foundation for the biometric wall along the Dominican-Haitian border. Photo: Hoy

Organizations that address tensions between Haiti and the Dominican Republic criticized the wall which the Dominican president is building on the border between the two countries.

“We oppose any wall-building initiative in any part of the world, but specifically in the Dominican Republic,” said William Charpentier, coordinator of the National Coalition for Migrations and Refugees (NCMR), a Dominican Republic-based nonprofit that works on migration issues.

[“A] binational project for environmental protection and channeling of the Pedernales River [which forms the border’s southern end] would be better than a wall,” said Guitho Laguerre, a participant at the Transborder Dialogue Table.

The group aims to advance dialogue among stakeholders on both sides. Laguerre is also coordinator of the agriculture cooperative Coopération des Planteurs Réunis à Lamontagne de Jacmel in Anse-à-Pitres, a Haitian town on the border’s southern terminus.

A 14-mile segment of the border wall was started in 2019 during the Danilo Medina administration. Overall, the wall is expected to cost about US $30 million, according to the Dominican daily Hoy.

This new phase, which aims to cover half of the 244-mile border, is among a series of immigration initiatives the administration of current President Luis Abinader has proposed recently. Other measures include issuing Border Resident permits to grant Haitians living near the border a one-day permit to conduct business in the DR in an attempt to regulate undocumented Haitian workers.

The wall will “include motion sensors, cameras, radar, drones, and a biometric control system, designed by Dermalog, that identifies people… [with] fingerprints, photographs, and demographic data,” according to the Caribbean National Weekly. Dermalog is a German firm which was also hired in 2020 to produce Haiti’s controversial national identity cards.

The barrier’s purpose is to prevent drug trafficking and illegal migration from Haiti, according to Euronews. It is scheduled to take nine months to construct.

Abinader’s rationale for building the border wall is not sound, and the structure may not be effective, some say.

“I think the government wants to build the wall right now because of the insecurity in Haiti,” said Antonio Michel Feliz, coordinator at the Dominican Haitian Human Rights Committee, a nonprofit in Barahona, that offers training, legal advice, and rights awareness classes to migrants, most of them Haitian.

“I think, short or long term, this will bring many conflicts,” Feliz said.

NCMR’s Charpentier believes that in reality the wall “will increase human trafficking costs, and that of weapons and organs traffic.”

He added that the wall is part of the DR government’s racial and economic strategy to pay “miserable wages to migrant workers… so they don’t advocate for their rights.”

An earlier, shorter version of this article was published on the website of the Haitian Times.