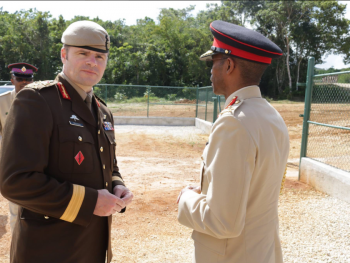 The Caribbean Special Tactics Centre or CSTC was officially opened at the Jamaica Defence Force Moneague Training Camp. The opening took place on March 26. Canada financed the project which cost around $2.5 million. “It will be a rally point for Caribbean special forces to come together,” Maj. Gen. Mike Rouleau, head of Canadian Special Operations Forces Command, told Defence Watch. “It has a huge value for a modest injection of funds.”

The facility has instruction and team rooms for planning. Two courses have already been  run out of the building, Rouleau said. That included a leadership course and a rappel master course.

The CSTC is geared at producing graduates highly skilled in advanced military tactics and techniques, Jamaica’s Chief of Defence Staff, Major General Rocky Meade, said in his opening remarks at the facility. “The centre will deliver advanced training and certification and facilitate knowledge exchange in security and defence proficiency to militaries and police forces with similar interests,” he added.

The main focus of CSTC will be on special tactics and operational readiness, Meade pointed out.

“This is part of a vision that we have for the region – to deliver training to small forces across the world,” he explained. “I have had dialogue with my fellow military heads in the region with a view to harnessing our different skills sets, our different expertise, to create schools within our countries and by our forces that will complement each other and offer a wide range of military training to small forces around the world.”

Canadian special forces have been involved in Jamaica for about 12 years. The Canadian Special Operations Regiment or CSOR, based in Petawawa, is involved in the training.

That training came into use during a 2009 incident in which a mentally disturbed gunman hijacked a CanJet airliner in Montego Bay. A Canadian-trained Jamaican counter-terrorism team stormed the airliner and captured the gunman without firing a shot.