The ‘new Cold War’ and the hegemony of global capitalism 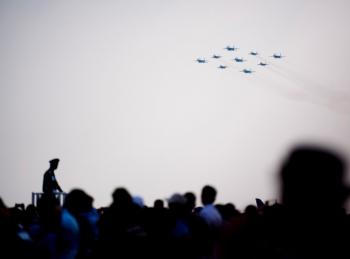 A double-barrelled ‘new Cold War’ is on, with the US-led empire of capital on one side and its rivals, China and Russia, on the other. The Canadian ruling class has enthusiastically enlisted to fight alongside its American partners. This camp has been the primary instigators of tensions with both countries that could culminate in a disastrous war between major world powers.

Relations between Canada and China have deteriorated since Canada arrested Huawei CFO Meng Wanzhou at America’s behest on the grounds that she allegedly violated the US’ merciless regime of sanctions on Iran. If extradited to the US and convicted, Meng faces 30 years in jail. Subsequently, China arrested two Canadians, Michael Kovrig and Michael Spavor, on espionage accusations. Since then, Canada has taken a more aggressive approach towards China.

The South China Sea, subject to a dispute between China and its neighbours, is a crucial flashpoint. In March, a Canadian warship sailed through these waters, a move that seemed designed to threaten China. In 2019, Canada sent naval vessels through the area on at least two occasions. Internal documents show that Canadian defence officials consciously undertake such measures to posture militarily, saying that they “demonstrat[e] Canadian support for our closest partners and allies, regional security and the rules-based international order”—“rules,” incidentally, which seem to be defined by Washington and its adjuncts and applied when it’s convenient for them.

Similarly, last year, two Canadian warships, missile-laden frigates with 500 sailors and torpedo-carrying Cyclone helicopters, took part in the Exercise Rim of the Pacific (RIMPAC) in late 2020, which is the world’s largest naval war game and takes place across the Pacific Ocean near Hawaii every other year. RIMPAC, despite objections from Hawaiians, involves navies from the countries taking part:

jointly conduct[ing] live-fire testing, ship-sinking, submarine warfare and amphibious assault. They also engage in air force training, precision bombing and urban warfare practice. The exercise is a massive show of force by western navies in the Pacific region and provocative to China, which has been prohibited from participating.

In this context, Canada is spending $77 billion to buy 15 new warships, which are projected to end up costing $286 billion when one accounts for maintenance, repair, and demolition.

Still, acting Chief of the Defence Staff, Lieutenant-General Wayne Eyre, wants more money spent on war machines. In April, he claimed that “for the first time since the early 1940s, we, the Western alliance, face a military capability overmatch both in terms of quality and quantity of the type of military capabilities that China is investing in.” Yet China has an estimated total of 320 nuclear warheads, less than six percent of the size of the US’s 5,800-warhead arsenal. Furthermore, as the Globe and Mail—not exactly headquarters for the anti-war movement—points out, China “has long geared its military toward defending itself against the United States” rather than to wars of aggression.

The North Atlantic Treaty Organization (NATO), a military alliance hostile to Russia and in which Canada is a member, has grown by 14 countries since the end of the Cold War, getting to Russia’s border in 2004, despite George H.W. Bush and Bill Clinton’s assurances to Russian leaders Mikhail Gorbachev and Boris Yeltsin. In that climate, Russia sent troops into Georgia and Ukraine and annexed Crimea, and Canada-Russia relations have become antagonistic.

The Canadian military is in Russia’s neighbourhood and this rankles Moscow. Canadian troops are currently stationed in Ukraine training members of the country’s military, which is dotted with some rather unsavoury characters, to put it mildly. Canadian forces are doing the same in Latvia. Recently, Canada participated in the annual Exercise Sea Breeze, a provocative two-week-long Ukraine-NATO military drill perilously close to Russia and featuring about 30 warships and 40 aircraft as well as approximately 5,000 soldiers. Russian ran parallel drills in response.

In addition, Canada has levied economic sanctions against Russia and Russia banned nine Canadians in response.

The Canadian government and media, like their American counterparts, make noise about needing to take on China because of concerns over the welfare of Uighur Muslims or over the Hong Kong security law, and to confront Russia over human rights violations inside and outside of the country. The idea that these considerations drive the politics of NATO states, or that their media outlets care about them can be dismissed out of hand. Indeed, if they cared about human rights violations, they’d stop carrying them out and endorsing them both internally and internationally, and wouldn’t give tyrannies like Israel and Saudi Arabia weapons to violently repress people or provide ideological cover for such actions.

China is a major trading partner of the US and Canada while Russia and Germany have worked together on the Nord Stream natural gas pipeline. Nevertheless, for the US, Canada, and their partners, the new cold wars are about hegemony over global capitalism. The reasons the South China Sea is so hotly contested are: that $5.3 trillion worth of trade, nearly one-third of all global maritime trade, pass through it every year; that various estimates say that the South China Sea is home to between 11 billion and 125 billion barrels of oil, and between 190 trillion and 500 trillion cubic feet of natural gas.

In June, the G7—including the US, Canada, France, Germany, Japan, Italy, and the UK—discussed plans “to counter China’s growing influence” by developing the Build Back Better World (B3W) initiative, an infrastructure plan for the Global South. The B3W is meant to be an answer to China’s Belt and Road Initiative, a multi-trillion dollar undertaking through which China has signed deals with over 100 countries to cooperate on railways, ports, highways and other infrastructure projects. The White House says that B3W will “mobilise private-sector capital in areas such as climate, health and health security, digital technology, and gender equity and equality.”

Meanwhile, the proxy war in Libya is in part driven by US-Russian antagonism over Libya’s natural resource wealth.

While the animus toward China has dynamics that are distinct from the animus toward Russia, planners in the core capitalist states conceive of these as part of a single war against any forces that could upset their dominant position in the global political economy. NATO issued a communique at the end of its June summit asserting that:

We face multifaceted threats, systemic competition from assertive and authoritarian powers, as well as growing security challenges to our countries and our citizens from all strategic directions. Russia’s aggressive actions constitute a threat to Euro-Atlantic security… State and non-state actors challenge the rules-based international order and seek to undermine democracy across the globe. Instability beyond our borders is also contributing to irregular migration and human trafficking. China’s growing influence and international policies can present challenges that we need to address together as an Alliance.

The alliance goes on to say that “China’s stated ambitions and assertive behaviour present systemic challenges” to the global order. Last month, NATO also released “NATO 2030,” a set of proposals the organization endorsed at the summit. The document proclaims that “China’s rise fundamentally shifts the balance of power” and claims that NATO is facing “unpredictable threats, including… Russia and China’s challenges to the rules-based international order.”

Earlier this year, according to the Wall Street Journal, President Biden and Prime Minister Trudeau agreed to upgrade NORAD, a network of satellites and radar in the Arctic, “in a bid to counter a growing military presence in the north from Russia and China.” The paper goes on to note the economic significance of the Arctic, pointing out that “Russia has been developing ports along the Northern Sea Route, a shipping route that snakes along the Siberian Coast” and that China “views the Arctic as a key shipping route, according to government documents, and has tried investing in northern mines that give the country access to minerals like zinc, nickel and gold, has forged partnerships with several countries that border the Arctic.”

The US is the world’s leading nuclear power. Other NATO countries have nuclear weapons and so do China and Russia. Any set of dynamics that increases the possibility of war between these countries is incredibly dangerous to all of life on earth. That Western states (including Canada) are exacerbating this risk to secure their position in the imperialist world system means we must stop the war machine in its tracks. Anti-capitalist organizing and anti-war organizing are one and the same and the task could not be more urgent.

Greg Shupak writes fiction and political analysis and teaches Media Studies and English at the University of Guelph-Humber. He’s the author of The Wrong Story: Palestine, Israel and the Media. He writes a monthly column with Canadian Dimension and his work frequently appears in outlets like Electronic Intifada, F.A.I.R, The Guardian, In These Times, Jacobin, and The Nation.