A new rebellion in Haiti 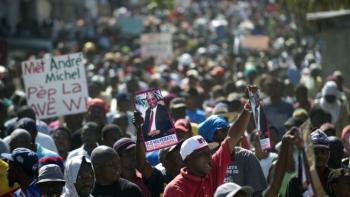 The spark that lit the most recent rebellion was an announcement by the Haitian Prime Minister Jack Guy Lafontant that gas, diesel and kerosene prices would be raised by 38-51%.  Haitians took to the streets en-masse across the country.  After just two days, the growing grassroots mobilization forced the government to rescind the gas price increases.  But the protests escalated into a two-day general strike, barricades blocking streets and highways in cities throughout the country.  PM Jack Guy Lafontant resigned but it was too little too late.  The Haitian people are demanding the removal of the US-backed and fraudulently-elected president Jovenel Moïse.

Donate to support independent GRASSROOTS MEDIA IN HAITI, so it can continue to share news and information among people in all parts of Haiti, and with the rest of the world.   Make a tax-deductible donation to the Haiti Emergency Relief Fund using the ‘Donate’ button. HERF’s fiscal sponsor is East Bay Sanctuary Covenant.