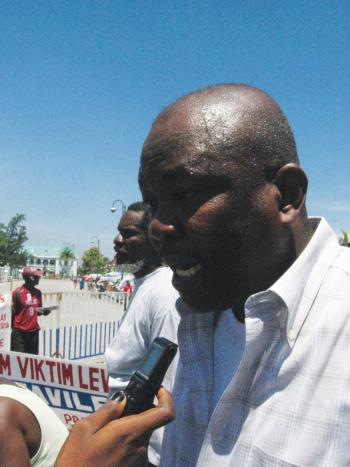 January 11, 2011 - Port-au-Prince, Haiti: Despite the global promise of 11 billion dollars in assistance from donor countries and over a billion more donated to relief organizations, Haitians struggle to find shelter, clean water and food in displacement camps, according to a report released today by the Lamp for Haiti Foundation and the Institute for Justice & Democracy in Haiti (IJDH). The report, titled One Year After the Earthquake - Haitians Still Living in State of Crisis, documents continuing desperation in Haiti's camps even after the cholera outbreak, and recommends a rights-based approach to recovery and reconstruction.

One year after the January 12, 2010 earthquake, one million Haitians still live in 1,000 internally displaced persons (IDP) camps scattered around Port au Prince. The sudden and profound impact from the cholera outbreak - over 3,000 deaths and 130,000 people infected - demonstrated the failure of relief and reconstruction efforts by donor countries, aid agencies and the Haitian government. While cholera has not yet fully spread to the camps, given the extremely unsanitary conditions and overcrowded camps, the results would be disastrous. An estimated 400,000 Haitians could be infected within a year.

The LAMP/IJDH report is based on a survey in December that is part of a longitudinal analysis of living conditions in Haitian camps and the on-the-ground impact of relief efforts from the international community. The report indicates that despite the significant risk of cholera, 50 percent of respondents surveyed had not received any cholera preventive aid, not even education. Only eight percent of respondents received all or most of their drinking water from aid agencies.

According to Regine Theodat, an attorney with the Lamp for Haiti Foundation and report co-author, "the inadaptability and late response of aid organization to the cholera epidemic needs to be corrected immediately to prevent rampant spread in the camps." In the absence of sufficient water provision, only 39 percent of respondents had access to drinking water daily. Twenty-one percent had no access to drinking water at all.

The report found that families continued to live in a state of crisis. Sixty percent of families lived on less than $1 a day and struggled to find food and provide clean drinking water. One in two families reported not being able to feed their children for a full day the previous week. "With few work opportunities, aid assistance is necessary for most Haitians living in IDP camps," says Nicole Phillips, Staff Attorney with IJDH and report co-author. But Phillips cautions that "aid be planned and coordinated to advance self-sufficiency and permanence." The report recommends that this include investing in water treatment facilities rather than distributing bottled water, and installing compost toilets in lieu of portable toilets that require regular emptying.

The full report is attached here or can be viewed at http://ijdh.org/archives/16403. The February Report is available at: http://www.lampforhaiti.org/~lampforh/?q=content/idp-investigation-finds-desperate-conditions-haitis-tent-cities. The July Report is available at: http://www.lampforhaiti.org/~lampforh/?q=content/neglect-encampments-haitis-second-wave-humanitarian-disaster.

One of Haiti’s leading human rights lawyers, Attorney Mario Joseph, will speak at public events in Montreal and Ottawa on January 21, 22, 23 and 24. Mr. Joseph is Director of the Bureau des avocats internationaux (see below). For details of his appearances and to arrange interviews, go to: http://www.canadahaitiaction.ca/events. In Montreal, contact Darren Ell at 514-483-2458.

The Institute for Justice & Democracy in Haiti(IJDH) and its Haiti-based affiliate, the Bureau des Avocats Internationaux (BAI), strives to work with the people of Haiti in their non-violent struggle for the consolidation of constitutional democracy, justice and human rights, by distributing objective and accurate information on human rights conditions in Haiti, pursuing legal cases, and cooperating with human rights and solidarity groups in Haiti and abroad.