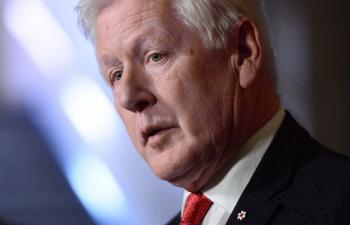 Bob Rae’s appointment as ambassador to the UN is a direct result of Canada’s defeat in its bid for a seat on the United Nations Security Council. But, it suggests the Liberals are ignoring the lessons of that defeat and calls to rethink Canadian foreign policy.

Three weeks after the Trudeau government suffered an embarrassing loss in its bid to sit on the UN’s most powerful decision-making body the individual who lead the multi-year campaign is out. In the final month of the Security Council push, Marc André Blanchard’s efforts were upended by an aggressive “No Canada on the UN Security Council” movement. Days before the vote Blanchard even felt the need to respond to the grassroots activists with a letter to all UN ambassadors defending Canada’s policy on Palestinian rights.

While it is good that Blanchard was forced out, appointing Rae to replace him suggests Trudeau has learned little from the Security Council defeat. Rae has long pushed pro-US, militarist and anti-Palestinian positions.

In 2011 Rae aggressively promoted bombing Libya. Before NATO formally began its war, the Liberal foreign critic called on the Stephen Harper government to work with the opposition National Transitional Council and later attacked the NDP for only backing six months of bombing. The NATO war spurred an upsurge in anti-Blackness, including slave markets in Libya, and violence that spilled southward to Mali and across much of the Sahel region of Africa.

A year before pushing for war on Libya, Rae allied with Harper to extend the occupation of Afghanistan beyond an announced troop withdrawal in 2011. In mid-2010 the Liberal foreign critic called on Ottawa to “see this thing through”. If it were up to Rae, Canadian troops may still be fighting in Afghanistan.

Rae justified Canada’s 2004 overthrow of Haiti’s elected President Jean Bertrand Aristide, claiming his “ineffectiveness and gross corruption led to another coup and Aristide’s exile (with money in tow). He now lives in South Africa, and still has some true believers in Haiti, but certainly not a majority.” A US government commissioned polls repeatedly found that Aristide was far and away the most popular politician in Haiti.

Rae responded to Hugo Chavez’s death by tweeting his “condolences, and hopes for democratic future” and a few months later pressed the Harper government to take a stronger position against Nicolas Maduro after he won Venezuela’s 2013 presidential election. In January of last year Rae added, “Chavez and Maduro have abused their power terribly, impoverished their people and created the greatest humanitarian and refugee crisis in modern Latin American history. The romanticization of their regime and ideology is a disgrace.”

But it is on Palestinian rights that Rae has shown himself to be most hostile to human rights and democracy. The former NDP premier of Ontario left the party in 2002 because of its support of Palestinian rights. When NDP Deputy Leader Libby Davies (correctly) stated in 2010 that the Israeli occupation began in 1948 not 1967 Rae joined a pile on. He stated, “the appropriate decision, given her stature and responsibilities with the NDP, is for Mr. Layton to ask for her resignation as Deputy Leader and for Ms. Davies to issue an apology to all Canadians. Nothing short of that will do.”

Rae delivered a speech to the explicitly racist Jewish National Fund and, along with vicious anti-Palestinians Irwin Cotler and Jason Kenney, Rae was on the steering committee of the Canadian Parliamentary Coalition to Combat Anti-Semitism, which sought to criminalize criticism of Israel. His wife, Arlene Perly Rae, is a former vice-president of the anti-Palestinian Canadian Jewish Congress.

The appointment of Rae to replace Blanchard suggests Trudeau is ignoring calls for a review of Canadian foreign policy after the Security Council defeat. The most clearheaded and wide ranging review push is the Canadian Foreign Policy Institute’s demand for a “fundamental reassessment of Canadian foreign policy”. The open letter to the PM includes 10 questions and has been signed by hundreds of politicians, artists, activists and academics including David Suzuki, Naomi Klein, Stephen Lewis and Linda McQuaig as well as sitting MPs Leah Gazan, Niki Ashton, Alexandre Boulerice and Paul Manly and former MPs Roméo Saganash, Libby Davies, Jim Manly and Svend Robinson.