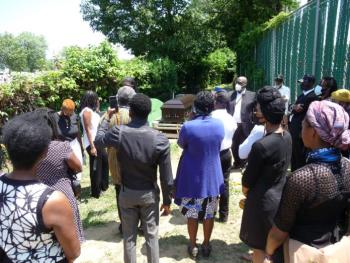 Mourners from New York's Haitian community at the graveside of Ernst Janus, a co-founder of Granchimen. Photo: Kim Ives/Haiti Liberté

Dozens of mourners from New York’s Haitian community turned out for the funeral of Ernst Janus on the morning of Tue., Jun. 23, at the Frantz Daniel Jean Funeral Home in Brooklyn.

Janus, 80, was a well-known Haitian cultural and political figure who died on Jun. 3 at Downstate Hospital in Brooklyn after a long illness.

Although they wore face-masks and began by sitting in “socially distanced” chairs due to continuing Covid-19 health guidelines, the mourners soon came together in a large circle around Janus’ casket, as drummers and singers gave him a send-off with traditional vodou chants and songs.

The mourners then drove in a funeral cortege to Janus’ grave-site in Cypress Hills Cemetery, where he was laid to rest just a few feet from “Comrade Weber” Rochemont, who died on May 30, 2005. Both men had been progressive icons in the Haitian community.

“What is important is what you do with the time that you have on this earth,” said Ernst Sévère, who was a co-founder with Janus of the progressive Granchimen cultural organization based in Brooklyn, in a eulogy before the casket was lowered into the ground. “Janus has died, has been transformed, has been spread, has multiplied. But what remains for society are his works. There are many militants here, who believe in change, who struggle for change, who sacrifice themselves for change. That’s what important in Janus’ life, in my life, in all of our lives: change.”

Several others spoke at the grave-side, and the ceremony ended with drummers and songs.