Nixon Boumba: The isolation of Haiti must stop 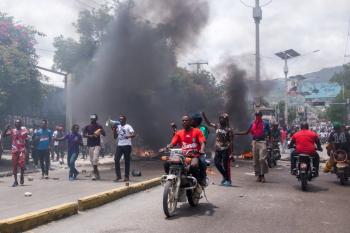 Nationwide anti-corruption protests erupted on Sunday, June 9, demanding President to step down following the most recent reports published that formally implicated him in the embezzlement of billions of dollars from Petrocaribe.  Photo: SOPA Images/SIPA USA/PA Images. All rights reserved.

Francesc Badia: Are the demonstrations in Ecuador a reminder of what has happened in Haiti? Did the increase in fuel prices in July 2018 trigger a cycle of protests that are still ongoing today? Are the protests focused on demanding the president’s resignation given his involvement in a number of corruption scandals? What are the key elements of these protests?

Nixon Boumba: The events in Ecuador and what has been going on in Haiti for years reflect the need and will for a paradigm shift, that is pushing the people to protest.

In July 2018, protests began in Haiti because of an increase in the price of fuel (to the same level as in Ecuador) and also from the same pressure of the IMF, which requires countries to cut their fuel subsidies. Resulting in very strong protests.

Haiti has recently been completely blocked for 4 days and the president even disappeared for 3 weeks as he can no longer travel around the city. There are demands that the President steps down on the basis of corruption, his behaviour towards Venezuela (he signed an agreement with PDVSA, the Venezuelan state oil company) and social inequalities, all of which are important factors in the protests.

The fundamental issue is not only to overthrow the president – who has been involved in numerous cases of corruption, has contacts with drug traffickers and has contributed to the growth of gangsters in society – but to try and change the system.

It’s an important but complicated issue because the system in Haiti is run by a repressive state. We have an entire nation fighting against the state, particularly because of the manner in which the government manages its connections with countries in the region, Europe and the United States but does not deal with Haitians.

All of this is happening ten years after the earthquake that devastated the country and still very few people can say where the enormous amount of money that came from foreign donors for the reconstruction of the country has gone. But since September 2018, the question has been: where is the money of Petrocaribe - the Haitian state oil company - going?

The people now challenge the state, the bourgeoisie and the international community, who act like a colonial community. We are going through a long crisis because people have the capacity and willingness to react and respond to the problems that have arisen. The issues that arise are those of justice and social equality, the need to put an end to this predatory State, the need to end international interference and the need for the people to take charge of having a future outside of this interference and this colonial relationship.

Since 2010 and since the gasoline disaster, there have been many changes in this country – the earthquake and its devastating consequences completely changed the political and democratic system. On a political, economic and cultural level, the disaster was much greater than the earthquake itself. It was Hilary Clinton in 2010 who decided who would be president. In 2014 there were many protests because people were already becoming aware and no longer wanted to be under colonial rule or the Clinton/United States influence. On January 22 there was a large demonstration in which part of the centre of Port-au-Prince was destroyed, including the district of Pétion-Ville, where the elites, the rich and many diplomats live.

The president was elected with less than five hundred thousand votes despite the electorate being six million. $ 13 billion was donated for the reconstruction of Haiti that has seemingly contributed nothing (the living conditions of Haitians has not improved).

So, yes, it was the rise in fuel prices, IMF interference, the president's far-right approach and the budget issue that caused all these protests.

The president was elected with less than five hundred thousand votes despite the electorate being six million.

FB: How do you think the future looks with regards to the Haitian President and Hattian democracy?

NB: The president no longer has power because he is absent and doesn’t direct anything. He has been blocked out by the protests and can no longer do certain things. He cannot attend parliamentary sessions, he controls nothing, strikes have paralyzed the country for four days.

We are in a country where there are only really two days where it operates normally. The president is still supported and held in power by the United States, because it was the United States that brought him to power. However, a few days ago, the opposition created a commission to facilitate the transition of power which would allow for an orderly exit for the president.

There are also civil organisations that have built a “bridge” and whose mission is to organise an orderly exit of the president with a mandate and a road map for the future (the president himself has created a commission with his relatives). The most important issue for the future is that the current president, Jovenel Moïse, who was placed in power by the former president Michel Martelly, has wasted the five billion dollars of oil funds.

But the Marelly clan, the Clinton clan and the United States establishment (and Marco Rubio, the Florida senator who controls and influences American politics in Latin America) want to keep the president in office. They even tried to send US mercenaries to Haiti in February, when the protests intensified. The Haitian police arrested them, but the US Embassy released them, and they could be repatriated without being brought to justice. These clans have increased the presence of gangsters in our society and made it a war zone and a market for the US arms trade.

There are elements that are capable of inspiring a much more interesting and sustainable alternative democratic project for the Haitian people. There is hope, but there are also challenges. We must have a vision that goes beyond the problems we have faced, and that challenges what is blocking a truly democratic exit for Haiti.

The present and future of Haiti is to integrate better into the system of regional and global solidarity and to progress and overcome the isolation that only benefits a minority.

NB: Haiti is like a lost island, ignored in a giant ocean in the middle of the Caribbean. It is the only country that speaks Creole and French (although only a minority speak French). Haiti has been isolated from the rest of Latin America throughout its history and especially since the rebellion, partly because it was a true emancipatory project that the Western world didn’t tolerate.

Because Haiti is isolated, everything that is happening here is being obscured by the world. But we must open our eyes to the Haitian reality and spread more information about what is happening here because we are taking the first steps to try to integrate more into the Latin American community.

Thanks to the French language, the situation in Haiti can be commented on in the rest of the world and some barriers can be overcome (although most Haitians do not speak French). We need to make an effort to spread what is happening in Nicaragua, Ecuador, Haiti and other countries as a regional trend, and we must try to create a regional and international agenda for action, so that we can learn to help each other.

This is what can put Haiti back on the road map of the Latin American agenda, but also of the global debate. There must be a fight for the information about Haiti to spread around the world.

The present and future of Haiti is to integrate better into the system of regional and global solidarity and to progress and overcome the isolation that only benefits a minority. But we are taking the first steps.