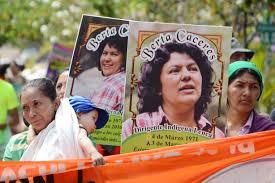 National Lawyers Guild President Natasha Lycia Ora Bannan sent a letter in Spanish on behalf of the Guild to judicial officials in Honduras on 26 July, urging justice and full accountability for the murder of Berta Cáceres, the indigenous, environmental and human rights leader slain in her home on March 2, 2016.

The first hearing in the murder trial of nine defendants in the case will open on Friday, July 27. The Guatemala Human Rights Commission notes that “After tremendous international pressure, the skilled work of the Honduran legal team, and with the courageous insistence of Berta’s family and organization, COPINH, eight suspects have been arrested and the real story of Berta’s murder is becoming clear.  The gunmen who stormed her home were apparently coordinated by an active duty Honduran intelligence officer together with a former military officer working in a private security company, who had been hired by executives of the DESA Corporation. DESA sought to build the Agua Zarca dam in Lenca territory, a dam the communities opposed. Berta, as an effective and internationally recognized human rights defender, was a problem in the way of DESA’s plans….There are well-founded concerns that the Honduran state prosecutor is undermining the possibility of justice by withholding evidence that could incriminate intellectual authors and provide accused murders with grounds to appeal a guilty verdict…to date, the public prosecutor’s office has repeatedly refused to comply with court orders to hand over the vast majority of the evidence it has gathered in the investigation.”

The men being brought to trial are:

The English translation of the letter is published below:

The National Lawyers Guild (NLG) is the oldest and largest legal association dedicated to human rights and the public interest in the United States, with chapters in each state. Since its foundation, the NLG has maintained an internationalist perspective and seeks to promote the adaptation of, and adherence to, international law in all nations. We have sent numerous delegations to Honduras, and we continue to note the impunity for human rights violations tolerated by Honduran authorities. The NLG urges the Honduran judiciary to conduct a fair and impartial trial process for defendants charged in the murder of Berta Cáceres in order to ensure that truth and justice prevail. The eyes of the world are on Honduras as it confronts this emblematic case.

Cáceres was more than an environmentalist and indigenous rights activist. Her role as a key social movement and human rights leader within Honduras and internationally made her a target of systematic and ongoing intimidation, harassment, and criminalization by the powerful forces who felt threatened by her effective advocacy and culminating in her murder on March 2, 2016.  The judicial proceedings for Cáceres’ assassination must evaluate not only what transpired on the day of her murder, but also the systematic persecution that she faced, as well as the defendants’ roles in the criminal structure that conspired to assure her voice was eliminated. To that end, at the evidentiary hearing scheduled to start on July 27, 2018, it is vital that all evidence be admitted that addresses the context of persecution Cáceres faced leading up to her death in order to uncover the criminal structure that carried out her murder.

We are extremely concerned to hear that the Public Prosecutor’s Office has failed to comply with the multiple Court orders to provide information to the lawyers for both the victims and the defendants, and that the trial may be allowed to start without this vital evidence being provided to all parties.  Repeated requests for access to this evidence through legal channels have proven futile.  This refusal of the Public Ministry to provide the information jeopardizes the rights of the victims to redress of their grievances and the rights of the defendants to prepare their defense, and once again sets the stage for continued impunity.

Cáceres’ case exemplifies the grave risks confronted by those who defend their communities, territories and human rights, all of whom are vulnerable persons that the State has an obligation to protect, particularly in such cases where the Inter-American Human Rights Commission has ordered the Honduran government to institute protective measures. The importance of assuring a fair judicial process with a full and transparent accounting for all persons responsible for Caceres’ murder, including the intellectual authors, is vital to send a clear signal to criminal elements that the Honduran State can in fact uphold the rule of law. We sincerely hope this Court will impart complete justice in this instance and not contribute to further perpetuate impunity, instability and more violence.