No, Canada shouldn’t be arming Ukraine 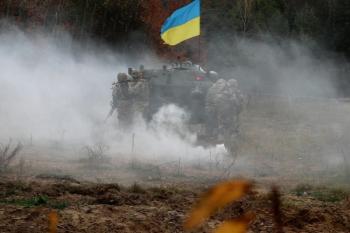 Why would a progressive media outlet regurgitate talking points from the Conservative Party and hawkish media pundits about Canada arming the Ukrainian military?

On January 31, The Tyee published an article entitled “Canada’s Military Aid Hypocrisy,” echoing the call of former Conservative leader Erin O’Toole and numerous mainstream journalists for Canada to provide more weapons to Ukrainian forces in their standoff with Russia. The article’s progressive twist was to counterpose the Liberals’ supposedly dovish position on Ukraine with their material support for Saudi Arabia’s devastating war in Yemen.

The story’s framing of the tension between Russia and NATO is remarkably shallow and lacks key context. To begin, the article mentions nothing about the 2014 Western-backed coup against Ukrainian President Viktor Yanukovych, who was oscillating between the European Union and Russia. It also ignores the fact that Canadian troops have played a key role in supporting the Ukrainian military since 2015, and that the Trudeau government recently announced an extension of Operation UNIFIER, loosening restrictions on Canada’s military trainers supporting those fighting against separatists in eastern Ukraine’s Donbas region.

What’s more, the piece fails to mention that the training is partly designed to pave the way for Ukraine’s possible accession to NATO, and that Canadian soldiers have knowingly trained neo-Nazi militias, including the infamous Azov Battalion, which is now an integrated part of Ukraine’s formal military forces.

The article also stays mum on the broader geopolitics driving the crisis. There’s nothing about NATO’s provocative expansion into eastern Europe or the stationing of thousands of North American troops on Russia’s border. More than 500 Canadian soldiers are leading a seemingly indefinite NATO mission in Latvia while Canadian fighter jets are in Romania (a naval vessel was also dispatched to the Black Sea, which borders Russia).

For its part, the United States has nuclear weapons and tens of thousands of troops stationed across Europe. Led by the US, NATO countries spend $1.1 trillion on their militaries each year while Russia’s military budget barely tops $60 billion. Portrayed as a defensive alliance, NATO has invaded or bombed Libya, Afghanistan and Yugoslavia over the past two decades. Having faced two European invasions over the last century, Russian officials are understandably concerned about NATO troops stationed 150 kilometres from St. Petersburg, particularly when US officials like former vice president Dick Cheney have openly discussed breaking up the Russian Federation.

In addition to omitting important context, the article revolves around a dubious question: “It is worth asking why such an outsized portion of these lethal exports are somehow bound for the benefit of one of the most murderous regimes in the world, rather than a besieged strategic ally standing up to geopolitical forces fundamentally opposed to the principles of democracy.” Leaving aside the danger of nuclear armageddon, the answer is remarkably simple: money. One government (Saudi Arabia) has funds to spend on Canadian exports while another (Ukraine) does not. General Dynamics Canada and other arms manufacturers sell weapons—with assistance from the federally-owned Canadian Commercial Corporation—to the Saudi monarchy, even while it prosecutes a devastating war and humanitarian crisis in Yemen.

While they’ve been reluctant to offer more lethal weapons, the Liberals have in fact equipped the Ukrainian military. They’ve donated tens of millions of dollars worth of helmets, vehicles, clothing and bulletproof vests while a new shipment of non-lethal Canadian equipment is expected to arrive in Kyiv in the coming days.

At the same time, the US and the UK have pumped billions of dollars worth of weapons into Ukraine since 2014, including anti-tank missiles and other hardware.

Washington, London and Ottawa see Ukraine as a proxy in their struggle to weaken Russia. Yet, as they’ve provided significant material assistance to the Ukrainian military, they have failed to press Kyiv to implement its commitments to federalism and minority language rights under the German and French negotiated Minsk agreements. The best medium-term solution to the conflict is to grant autonomy to the breakaway republics in the Donbas region and for Ukraine to remain a neutral state.

With Canada supplying military equipment to Ukraine, this outcome becomes less likely, and could even escalate the conflict. Instead, we should restore a working relationship with Moscow, help to make Ukraine a neutral buffer state between Russia and NATO, and put an end to the fighting for good.