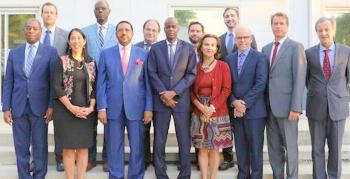 The United Nations Integrated Office in Haiti (BINUH) and the Core Group (bringing together ambassadors from Germany, Brazil, Canada, Spain, the United States of America, France, the European Union, of the Special Representative of the Organization of American States and of the Special Representative of the Secretary General of the United Nations) are seeking to sideline the [Montana Accords] agreement of August 30, 2021, warns the civil society group Nou p ap dòmi.

"We denounce the behavior of BINUH and the Core Group, which seek, by all means, to sideline the agreement of August 30, 2021, while supporting the current regime, headed by Prime Minister Ariel Henry", she declared, in a note which the online agency AlterPresse has received.

"It is this kind of ignorance and political interference from the international community that have led Haiti to where it is today," said Nou p ap dòmi.

Nou p ap dòmi calls, at the same time, on the Monitoring Office of the [Montana Accords] agreement of August 30, 2021 to consider the urgency of the situation. They must set up a governance mechanism to rectify the situation and restore security and allow the country to regain its sovereignty.

"The time has come to denounce our false friends ... Nou p ap dòmi considers the time to be serious, these are grave and complex circumstances, there is no time to waste; Haitians, Haitians, get up, don't sleep! ".

Composed of 21 members, including 13 from the “Commission for the search for a Haitian Solution to the Crisis” (CRSHC), and 8 members elected by sectors of civil society, political and popular organizations. Le Bureau de suivi (translated: “Office for the Monitoring of the Implementation of the Accords”) of the “Montana Accords” of August 30, 2021 began its work on September 20, 2021, following the elections held between September 15 and 18, 2021, its members informed.

He subsequently met, on Tuesday October 26, 2021, the de facto Prime Minister Ariel Henry, whom he asked to formulate a concrete proposal for a political dialogue.

Le Bureau de suivi of the August 30, 2021 agreement also met with representatives of the National Memorandum of Understanding (PEN), the Movement for the Transformation and Valorization of Haiti (MtvAyiti) and other organizations, he said in a press statement dated Tuesday, October 26, 2021.

Meanwhile, sectors of the political opposition, who have joined Ariel Henry's 9/11 2021 accord, are urging him to quickly put in place a consensus government.

Translated to English by CHIP editors