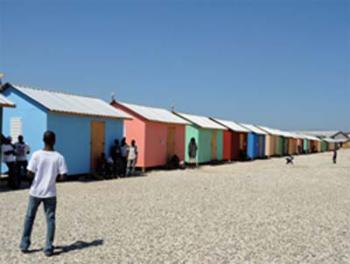 It was two years ago this month that a 7.0 earthquake struck Haiti, killing hundreds of thousands and leaving more than a million people homeless. Through U.S. charities, Americans donated more than $1.8 billion, but some in Haiti haven't seen much of that yet. First of a two -part story.

By Marisa Peñaloza and Carrie Kahn, WBUR Radio, January 16, 2012 (You can also listen to this story, 5 minutes, by going to the weblink.)

Charles Giiagliard, his wife and their five children live in a tiny one-room shack in downtown Port-au-Prince. His oldest daughter lies lifeless on a small bed, sick with a fever. Giiagliard calls his youngest daughter, Jessica, over and pushes back the hair from her head, revealing a long dark scar. Jessica was trapped under the rubble of their collapsed apartment when the earthquake hit. It took two days to get her out. Giiagliard says Jessica's wounds healed, but the family has not recovered.

"Look at the way we live," he says in Creole. "We are living like animals. Nobody looks out for us. At night when you sleep you get visitors; big rats come in."

The Giiagliards are among half a million people who, two years after the quake, still live in the squalid tent camps in Port-au-Prince. The camps are the most visible sign that Haiti still has a long way to go to recover from the disaster.

Cite Soleil You can count the number of large-scale reconstruction projects on one hand. Most are small, like a project tucked off the main road in the Cite Soleil neighborhood, several miles from the Giiagliards' camp. Seventy-three temporary wooden shelters were built last month by the American Red Cross together with other nongovernmental organizations (NGOs).

Charles Samuel got one of the wooden homes, which look like big toolsheds with a concrete foundation, plywood walls and a corrugated metal roof. Samuel says everyone here is grateful for the homes, which are much better than the sweltering tents the community was living in since the quake. But he points beyond the last row of homes to where dozens of families still live in tents in a swampy field. "We know there are a lot of needs here, but those in the tents need help, too," he says. "It's hard. We know not everyone is going to be helped."

Chart: Charitable Giving To Haiti (List of the 12 largest aid organization in the U.S. by donations received) http://www.npr.org/2012/01/15/145061928/post-quake-giving-to-haiti-an-updated-look-at-major-charities

That's the picture you get of progress in Haiti: gratitude for what has been done, but hope for much more. After all, expectations were set pretty high after the earthquake. Former President Bill Clinton, the U.N. special envoy to Haiti, repeatedly proclaimed that reconstruction would lead to a better nation.

At the Cite Soleil camp, residents wish that had been true. Out of earshot of the NGO officials, they ask why the small structures cost so much — about $5,000 a piece, including communal latrines and water-collection systems. They say that given the chance, they would have built them out of more permanent local materials, which would be cheaper with provide enough for everyone. You hear complaints like these a lot around Port-au-Prince, many against the NGOs, whose workers stick out in their shiny white SUVs.

Julie Sell of the American Red Cross says it's been a challenging two years. "We all wish that we were further along than we are, but Haiti is a complicated place and there aren't a lot of quick, easy solutions," she says.

For many NGOs, especially those with little experience in the country, it took more than a year to figure out how to work around those complications, like Haiti's chaotic land-registry system and its lack of building codes or housing policies.

Sam Worthington, the head of InterAction, a coalition of U.S.-based charities, says NGOs unfairly get the brunt of the blame. "We cannot meet all needs. We have a niche and that niche is important; it saves lives, but we cannot be the face and the only face of recovery," he says.

Worthington says the majority of money pledged to Haiti is managed by USAID and groups like the World Bank — not NGOs. But $1.8 billion given to U.S. charities is a lot of money. In the first year, much of that money went unspent. This year, NPR surveyed 12 large charities and found that while many still have a lot of money in the bank, the rate of spending has picked up.

Delmas 9 The American Red Cross, which raised more than half a billion dollars for Haiti, has really loosened its purse strings lately. The group is funding the repair of about a hundred houses in the Delmas 9 neighborhood of the capital.

Workers in Oguis Joileque's three-room house fix several walls and are almost ready to put a new roof on. He says through an interpreter that he could never have done it alone. "I see it is better, because me, myself, I was not in a position to do it," he says.

Many smaller groups, with decades of experience in Haiti, say they wish the money would have come sooner. But they don't have the fundraising machinery or name recognition that the big charities have. Dan O'Neil of the Pan American Development Foundation got a grant from the Red Cross to do repair work on Joileque's house. He says NGOs in general need to do a better job. "We do need to have greater transparency. We need to have a more standard reporting as to how money has been spent," he says.


Part two: The Challenge Of Measuring Relief Aid To Haiti

After Haiti's devastating earthquake two years ago, Americans donated large sums of money. This helped charities and aid groups save lives immediately after the disaster. But it's been much harder for them to help Haitians rebuild their devastated country. In the second of two stories, NPR's Carrie Kahn and Marisa Penaloza report that its difficult to get detailed information about how organizations spend their money.

NPR surveyed 12 of the largest and best-known U.S. charities about their work in Haiti. The groups say they raised nearly $1.8 billion and have spent more than two-thirds of that. But how is the money being spent, and what kind of impact is it having?

Guy Serge Pompilous is not impressed with the job nongovernmental organizations, or NGOs, are doing. Serge heads a small community group called Haiti Aid Watchdog. "Satisfactory ... just plainly satisfactory," he says. "People have been helped; there have been some beneficiaries. But there is still some work to do. That would be a D-plus, C-minus. I would rate them C-minus. Serge says it's been difficult to get nongovernmental organizations to account for the money.

Julie Sell of the American Red Cross disagrees. She says her organization has done a good job. She's standing in a Port-au-Prince neighborhood where 100 homes are being repaired with $150,000 from the Red Cross.

Sell says it's difficult to show someone exactly where their $10 contribution has gone. "One way we can show that impact is by telling the stories of Haitians and the people that we helped ... here is a life that you have helped to change," she says.

NGOs A Target Of Anger But as the pace of recovery in Haiti drags on, those whose lives have not changed are angry. Much of that anger is directed at the NGOs.

Pierre Jean Nelson has been living in a tent for two years and is out of patience. "What are they going to do with us? Because we can't suffer anymore. ... We can't take it anymore. ... It's too much," he says. He can't find a job and spends most of his days playing his rusted bongo. A small stream of foul-smelling water runs beside him. He wants to know where all the money has gone.

Nigel Fisher, the United Nations humanitarian coordinator in Haiti, says NGOs must do a better job accounting for their funds. He says other kinds of aid, like money given by foreign governments and international banks, is very closely tracked and monitored. "It's not so easy to track the NGO resources that were raised, and we guess that there were maybe $2 billion raised by NGOs around the world ... that has been difficult to track," he says.

The only legal accountability U.S. charities must complete is an annual form with the IRS. Many go beyond that requirement and post audited financial statements and other information on their websites. But those are complex documents with few details, especially when it comes to overhead costs in Haiti like housing, rental cars, security and local staff salaries.

A spokeswoman for the American Red Cross declined to provide a local overhead breakdown. World Vision did give NPR a local figure of nearly $1 million a month on average. That's 8 percent of the total amount the religious charity spent in Haiti.

Planning For The Long Term One of the other big issues facing aid groups is making sure enough resources go to long-term reconstruction as well as immediate relief.

The U.N.'s Nigel Fisher says everyone must invest in the future of Haiti and make sure national institutions are strengthened, or "we'll be here in 20 years' time, and our successors will have the same discussion unless we change the approach." Without that greater accountability, many fear there will be more waste and duplication.

Peter Bell of the Harvard Kennedy School of Government and a former CEO of CARE, agrees. He says U.S. charities should adopt a model used in the United Kingdom where groups jointly ask for money when a major disaster occurs. "It would take out some of the competition among the NGOs for resources and allow more of them to band together," he said. And he says that in Britain, an independent third party evaluates the groups' finances and its effectiveness.

Guy Serge Pompilous, of the Haiti Aid Watchdog group, would have welcomed such an approach. His group tried to do its own survey of NGOs but none responded to his inquiries. His organization is no longer trying to monitor the work of NGOs.

Serge doesn't want NGOs to leave Haiti, he just wants them to include more local input in their decision-making. "There's the proverb, you know ... they are giving a lot of fish but they are not teaching how to fish," he says.