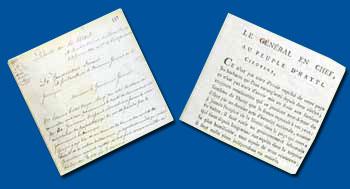 Duke University News, Thursday, April 1, 2010
DURHAM, N.C. -- A Duke University graduate student has discovered what is believed to be the only known printed copy of Haiti's Declaration of Independence. While researching the early independence of Haiti in February, Julia Gaffield found the document, an eight-page pamphlet dated Jan. 1, 1804, in the British National Archives in London. It is only the second declaration of its kind in the world, the first being the U.S. Declaration of Independence written by Thomas Jefferson and others.

Gaffield, who is researching early 19th century Haiti for her doctoral dissertation in history, said the document had been overlooked in the British archives, even as researchers spent decades searching for it in Haiti. "I wasn't specifically looking for it, but I had an eye out for it because I knew it was missing," Gaffield said. "We figured there was an original somewhere, but didn't know if it still existed."

"I suspect there will be immense interest in this discovery," said Ian E. Wilson, Librarian & Archivist of Canada Emeritus and president of the International Council on Archives. "To bring this document to light in Haiti's darkest hour may be seen as a symbol of renewal and rejuvenation, helping Haiti rebuild its national spirit following the recent earthquake. Julia's achievement in recognizing the significance of this printed document deserves high recognition."

"It's incredible that the long search for this important document should finally end at The National Archives," said Oliver Morley, acting chief executive at The National Archives. “This declaration sent to the British Government by Haiti’s first independent leader is of great historical importance to both Haiti and the British people, and provides unique insight into the first successful slave rebellion of modern times. We're grateful to Duke University in bringing this fascinating document to our attention and pleased to be able to make more people aware of its existence."

Duke University has established a special website about the discovery, with additional information about Gaffield, the document and early Haitian history. The site is at http://news.duke.edu/haitideclaration. The UK National Archives has posted a copy of the document at: http://www.nationalarchives.gov.uk/documentsonline/haiti.asp.

For her doctoral project, Gaffield did research in France, Haiti and then Jamaica, where she saw a handwritten copy of the declaration in the papers of then-Governor of Jamaica George Nugent. "There was a letter saying the Declaration of Independence was enclosed, not more than one hour off the press," Gaffield said, noting the only document she saw at that time was handwritten, not printed on a press.

In late January, Gaffield went to London to look at "the British side of things." That's where she found the printed version of what she had seen in Jamaica. "It was not misplaced; it had been there for a long time. This period has not been studied in as much detail, so these are documents few people have looked through, and if they saw it, they didn't realize the significance," said Gaffield, who was thrilled by the discovery but continued her research until the end of the day.

"The archives are not the place to make a big scene," Gaffield said. Instead, she dutifully returned the documents to the archives and then rushed to notify her advisers at Duke. Among them was Deborah Jenson, a professor of French Studies at Duke who has researched the U.S. publication of Haiti's independence documents. Jenson said Gaffield's discovery "is extremely important as it clarifies that the Haitian government's printing apparatus was fully functional at every moment of the new nation's independence. Although it is possible that the document had not been printed as of the Jan. 1 Independence ceremony, it is now clear that an authentic government-issued full version had been printed by the third week of January 1804, at which point it was brought to Jamaica."

In 1804, when Haiti announced its independence from France, Jamaica was a British colony. Its governor was in regular contact with the British government, which helps explains how this copy of the declaration ended up in a London archive.

"While we had many reprints of this declaration from 1804, researchers have long looked for an original printed copy issued by the government itself," said Laurent Dubois, a Duke professor of French studies and history, and another of Gaffield's advisers. Dubois noted that in 1952 Haitian intellectual Edmond Mangonès was asked by the government commission planning for the 150th anniversary of Haiti's birth to find an original or printed copy of the Declaration of Independence to put on display. After an unsuccessful search in many archives in Haiti and elsewhere, he wrote with exasperation that "all searches" for the document had been "in vain."

"It is really beyond belief," Mangonès added, "that not even a copy of the original printed version has been found in France, or in England, or in the United States." As Dubois noted, "Julia's discovery has finally changed that."

Documents from this early period of Haiti's history have not been well-preserved and have been scattered in various places, said Dubois, who is working with historians in Haiti and other countries to help rehabilitate Haiti's archives following the Jan. 12 earthquake. He and Gaffield consulted with Patrick Tardieu, a noted Haitian archivist who is now a fellow at Brown University's John Carter Brown Library, to confirm the document's authenticity.
"I was so happy to find out it was true," said Tardieu, the chief conservator of one of Haiti's oldest libraries. "It is an important document, and its discovery is important news for Haiti's scholarly community and more broadly for the people of Haiti."

Gaffield hopes the discovery will remind historians, Haitians and the world about the early history of the only country in the Western Hemisphere where slaves successfully revolted to gain national independence. "The Haitian Revolution was of immense consequence to Jamaica and other colonies in the Caribbean, as well as to the United States," Gaffield said. "This find is further evidence that there was contact and negotiations going on between them. Haiti was not isolated after independence and it played a complicated role in a world based on colonialism and slavery."