Ontario seats, or Saudi lives? In Ottawa, there's no contest. 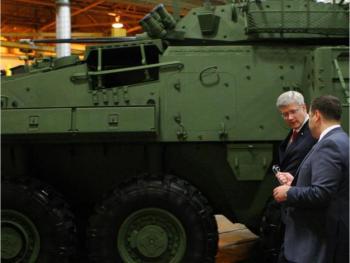 Prime Minister Stephen Harper tours the General Dynamics Land Systems - Canada plant, next to a LAV 6.0 (Light Armoured Vehicle) being built for Canada, at the facility in London, Ont., Friday, May 2, 2014. THE CANADIAN PRESS/Dave Chidley

About a week before the 2015 federal election, Justin Trudeau waltzed onto the dais of Tout le mode en parle, Quebec’s weekly talk show. About 1.2 million sets of eyeballs take in TLMEP every week, making an appearance a necessity for most (though certainly not all) federal politicians. Suitably, Trudeau was at his Trudeaupian best, interspersing well-meaning Liberal boilerplate with soupçons of his now-familiar smarm.

At one point, host Guy A. Lepage asked Trudeau about the federal government’s decision to allow the sale of weapons to Saudi Arabia, “a country harshly criticized for its disrespect of human rights.”

Trudeau quickly corrected the host. “First of all, they aren’t weapons, they’re Jeeps,” he tut-tutted. His ensuing explanation of why the Liberals were OK with the Conservative government’s approval of the sale — contortions of logic that would turn your average human being into a pretzel — was predicated on this very conceit: those aren’t weapons, silly. They’re little trucks. Canada — or at least a Canadian company — was basically selling the Saudis a bunch of Wranglers.

Always flimsy, this conceit collapsed entirely over the last week when images of Canadian-made armoured vehicles involved a military campaign against the country’s Shia minority showed up on social media (and in the Globe and Mail’s excellent reporting). Five civilians died at the hands of the Saudi National Guard over the course of two days, according to Reuters — the latest eruption of sectarian bloodshed in one of the most violent and repressive countries on earth.

There is a caveat, of course. The vehicles in question aren’t part of the export deal approved by the former Conservative government in 2014 and rubber-stamped by Trudeau’s Liberals a year later. That deal, worth an estimated $15 billion, was for LAV-25s, manufactured by General Dynamics Land Systems. The armoured vehicles being used by the Saudis against civilians in their Eastern Province, according to the Globe, appear to be Gurkha RPVs, built by Terradyne Armored Vehicles of Newmarket, Ont.

Yet the facts remain stubbornly hard to evade: The Canadian government, regardless of stripe, has been willing to permit arms sales to a country with an altogether dodgy human rights record, as well as an documented propensity to attack, murder and otherwise snuff out the democratic expressions of its Shia minority. And to understand exactly why the government would do such business with a psychopathic world actor, one need look only as far as London, Ontario, the key political district where General Dynamics builds the LAV-25.
Politically, London is catnip to politicians. A vote-rich region long beset by social ailments and higher-than-average unemployment rates, it is an ideal place for a politician to park his or her promises. And London’s four federal ridings are also the stuff of horse races — traditionally Liberal bastions that have gone overwhelmingly Conservative blue over the last decade or so.
In the General Dynamics plant, the Conservatives saw a military manufacturing behemoth aching for a lifeline as it struggled with post-Afghanistan doldrums, located in the sole London riding held by the NDP. What followed was a rather textbook case in how electoral brinkmanship blinded this country’s three major political parties.
Harper lobbied hard for the project with Saudi Arabia, and defended it to the hilt once General Dynamics won it. The NDP, Canada’s traditional home for peaceniks, itself caved to a more important constituency: the union movement, which bellowed loudly for the deal if only because the 3,000-strong General Dynamics workforce is by and large unionized. Thomas Mulcair criticized the deal when it was signed, only to become conspicuously silent when it became an election issue. Ditto Gerald Butts, Trudeau’s main political adviser.
The Liberals, meanwhile, didn’t just provide political cover for the deal during the campaign. Once ensconced in office, the party finalized its approval by way of then-Foreign Affairs Minister Stéphane Dion.
Squaring the Liberal’s ‘Real Change’ and Sunny Ways with a deal that delivers rolling, Canadian-made weapons to the streets of Riyadh is a difficult endeavour. One need only a Wikipedia-level knowledge of foreign affairs to get a sense of Saudi’s resolutely bloody history. It’s why the “deep concern” professed by Foreign Affairs Minister Chrystia Freeland over the Saudi crackdown sounds feigned and superficial — as though she reached out to a rabid dog and wanted us to believe she was genuinely surprised when it bit her.
It would be easy and tempting to place this whole debacle on the shoulders of the Liberal government. In a proper world, Justin Trudeau’s “they aren’t weapons, they’re Jeeps” excuse would be the hook for the mother of all campaign attack ads. In a proper world, the government would suffer for its hypocrisy.
But it won’t. The Saudi deal is gross both in content and by dint of the all-party support it secured. This isn’t just the government’s fault. Everyone’s hands are dirty. And perhaps bloody as well.
Posted August 1, 2017