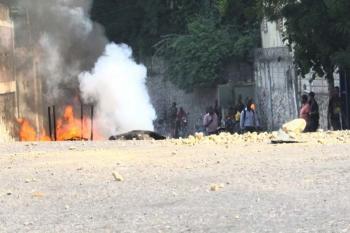 On Sep. 2, demonstrators blocked major roads in Haiti’s capital, Port-au-Prince, with burning tires, barricades, and stone-throwing to protest fuel shortages which have choked the country over the past few weeks.

The shortages stem from the Haitian government’s non-payment of about $100 million to gas distributors. On several occasions this year, tankers have anchored in the Port-au-Prince bay waiting for payment before off-loading fuel.

Last week, the government paid about 30% of its debt, and on Sun., Sep. 1, a tanker delivered 258,000 barrels of fuel, according to Fils-Aimé Ignace Saint-Fleur, the Director-General of the Office of Monetization of Development Assistance Programs (BMPAD), the agency in charge of Haiti’s fuel purchases. This delivery included 100,000 barrels of diesel, 70,000 barrels of gasoline, and 35,000 barrels of kerosene.

HAITI HAS BEEN PLAGUED BY FUEL SHORTAGES SINCE LAST YEAR’S COLLAPSE OF THE PETROCARIBE ACCORD.

Haiti has been plagued by fuel shortages since last year’s collapse of the PetroCaribe Accord, which provided the country with some $4.3 billion worth of cheap Venezuela crude from 2008 to 2018. Haiti only had to pay for 60% upfront, with the remainder of oil revenues going into the PetroCaribe Fund, a capital account that was to be invested in social welfare projects like roads, schools, and hospitals.

However, about $2 billion of the fund was squandered and embezzled by Haitian government officials, Senate and judicial auditors have found. Public outrage at this massive corruption scandal has fueled numerous, large demonstrations over the past year, like the one this week.

“There is no reason to talk about the lack of petroleum products in the local market,” said Secretary of State for Communications Eddy Jackson Alexis, calling for calm on Sep. 3. For weeks, gas stations have seen long lines of angry car and motorcycle drivers jockeying for scarce supplies. Gasoline usually sells for 224 gourdes ($2.36) at the pump, but on the black market, where many are forced to seek fuel, it’s selling for as high as 500 gourdes ($5.26).

The Sep. 2 demonstrations prevented some tanker trucks from delivering the oil off-loaded the day before.

“The fuel is available in the country,” Alexis said. “To distribute it to the gas pumps, it must be transported.”

Meanwhile, on Aug. 29-30, many parties, popular organizations, and individual politicians and activists of the Haitian opposition met in Papaye, on the Central Plateau, at the National Patriotic Forum organized by the front 4 G Kontre (Four Eyes Meet), headed by the Peasant Movement of Papaye’s Chavannes Jean-Baptiste, seeking to create a larger unified front and roadmap to demand that President Jovenel Moïse step down and a three-year transitional government begin. But the meeting did not go well, and the opposition’s two principal fronts – the Democratic and Popular Sector and the Forces of the Progressive Opposition (FOP) – refused to sign the unity document presented there.

The roadmap drafted and championed by those two fronts is called the Altènativ Tèt Ansanm pou refonde Ayiti (The Consensual Alternative for the Refounding of Haiti), but it was rejected at the Forum.

“It’s like a guide leading to the final victory,” said Marjorie Michel, one of the Democratic and Popular Sector’s leaders. “The Consensual Alternative for the Refounding of Haiti was debated and initialed by political groups, trade unionists, petro-challengers, and peasant groups. Most of the document provides that no agreement is possible with this regime, no signatory party will participate in elections with the President, and no political actor intends to join his administration. We are convinced that Jovenel Moise will leave.”

THE UNITY HOPED FOR IN PAPAYE WAS NOT ACHIEVED, AND THE OPPOSITION REMAINS DIVIDED.

But other groups in Papaye had a different proposal. The unity hoped for in Papaye was not achieved, and the opposition remains divided. Nonetheless, the Democratic and Popular Sector has called for the resumption of major street demonstrations on Sep. 8 after a lull during the summer, as is traditional.

Meanwhile, in an Aug. 28 interview with the Associated Press, Jovenel Moïse reiterated his intentions to not step down despite Haiti’s deepening economic and political crisis and the growing protests against him. “It takes a lot of courage to stay in power, but I am pledging to you to have the courage to continue moving forward,” Moïse told the AP.

“Of course we must know the truth, and the truth about this investigation must be released,” Moïse said of the audit being conducted by Haiti’s Superior Court of Auditors and Administrative Disputes (CSCCA) into PetroCaribe Fund malfeasance. “That is very important. The investigation must reveal the truth so that justice can be served and the guilty jailed. Those who misspent the government’s money, they should be arrested and locked up.”

But already the CSCCA has charged three companies belonging to Moïse with “collusion, favoritism and embezzlement” in misappropriations from the PetroCaribe Fund. In its May 31, 2019 report, the CSCCA detailed how two of Moïse’s construction companies (which were, in fact, one) received about $1.65 million in road repair contracts but never did the work. As long as he remains in office, Moïse is immune from prosecution.