The Ottawa Initiative on Haiti (repost) 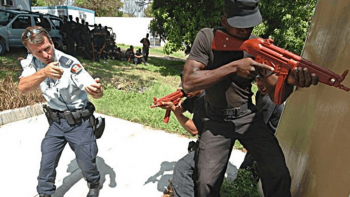 As announced earlier, I will be sharing some images and sounds I recorded in Haiti during my December 2003-January 2004 trip. That period has had a significant impact on my life, as the events which unfolded then continue to affect the lives of the people for whom I care the most.

A few weeks after my return to Canada, the dreaded coup d’état happened on February 29, 2004.

Counterspin, the CBC show in which I participated alongside Ezili Danto (Marguerite), Jean Fils-Aimé and Chlotilde Charlot, is indicative of the deep wounds inflicted on the Haitian people by “The Ottawa Initiative on Haiti” (code word for the secret meetings held to plot the 2004 coup and foreign occupation of Haiti).

More than a decade later, after having counted over 1 million Haitian victims of U.N. cholera, countless rapes and murders at the hands the foreign occupation forces, the perverts in blue helmets, having seen the return of Duvalier ahead of President Aristide… I wonder if my brothers and sisters who were once either supporters or deniers of the coup, have a different assessment now, than they had then.

Records of the Canadian Parliament show that on March 10, 2004, ten days after the coup, Stockwell Day, then-foreign affairs critic for the Conservative opposition, declared in Parliament: “… we have an elected leader Aristide. We may not have wanted to vote for him… But the (Canadian) government makes a decision that there should be a regime change. It is a serious question that we need to address. That decision was based on what criteria? We must have this discussion…This was clearly a regime change. Whether we like to admit it or not, we took part.”

One of the most disastrous consequences of the Coup and subsequent U.N. tutelage is that Haiti, a country with no known cases of cholera for the past 100 years, now has one of the worst cholera epidemics in the world. The cholera death toll has already reached 8500 and as of January 2014, more than 700,000 have gotten sick from the deadly bacterium.

To date, the UN refuses to assume responsibility for this grave act of criminal negligence.