Ottawa must be honest with Canadians about troops in Ukraine 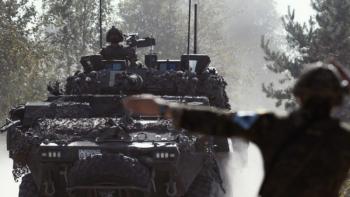 During a press conference last week, I interrupted Chrystia Freeland to ask whether Canada sent special forces to fight Russia in Ukraine. I also queried the deputy prime minister on whether Canada was at war with Russia and if she’s concerned about the possibility of nuclear war. I also asked if she considered NATO an aggressive alliance.

Before receiving a response, I was ushered out of the room at the Maison du développement durable in Montréal. But a reporter later asked Freeland about a New York Times report that Canadian special forces are working with US, British, Lithuanian and French counterparts in Ukraine. The elite troops are assisting Ukrainian forces with training and intelligence gathering. According to that article Canada’s secretive commandos are operating alongside a CIA mission to help coordinate US intelligence support for Ukraine’s war effort.

In her response, Freeland refused to confirm the deployment, instead focusing on the illegality of Russia’s actions. While most Canadians would agree with Freeland’s description of Russia’s horrendous invasion, we deserve to know if we are at war with a nuclear-armed state.

Alongside special forces, Ottawa has encouraged retired soldiers to take up arms against the Russians. Hundreds of Canadians have been assisting the war effort, including former top generals Rick Hillier and Trevor Cadieu.

Ottawa has also delivered or allocated $600 million in heavy weaponry to repel Russian forces from the eastern region of Ukraine, known as the Donbas. Canadian assistance includes howitzers and light armoured vehicles as well as tens of thousands of artillery shells, grenades and rocket launchers. The Communications Security Establishment is also helping the military deliver the weapons into Ukraine and assisting with other operations in the region.

About 1,400 Canadian troops are currently stationed in eastern Europe as part of Operation Reassurance. Since 2017 Canada has led a NATO battlegroup on Russia’s doorstep, which is set to more than double in size to 5,000 personnel. Canada’s deployment to Latvia was recently extended, which may violate the 1997 NATO-Russia Founding Act’s prohibition on permanently stationing troops in former Warsaw Pact countries.

Last week two Canadian vessels left Halifax to participate in NATO missions in the Baltic and North Sea. They are joining two other Canadian warships patrolling near Russia’s territorial waters.

NATO is bolstering its operations in eastern Europe in response to a war partly spurred by the alliance’s enlargement. When NATO moved to expand eastward in contravention of promises made to Soviet officials, the architect of US containment strategy towards the Soviet Union, George Kennan, warned that it would “inflame the nationalistic, anti-Western and militaristic tendencies in Russian opinion.” In a 1997 New York Times op-ed Kennan predicted NATO expansion would “impel Russian foreign policy in directions decidedly not to our liking.”

Still, Ottawa pushed to expand the alliance, including Ukraine’s adhesion to NATO. In a 2008 cable to the secretary of state, the Moscow-based diplomat William Burns, who currently leads the CIA, wrote, “Ukrainian entry into NATO is the brightest of all redlines for the Russian elite (not just Putin).”

While not formally part of NATO, Ukraine has been drawn into the alliance since elected President Viktor Yanukovich, who legislated the country’s neutrality, was ousted with Western support in 2014. With Canadian soldiers leading the charge, NATO has trained and armed 10,000 Ukrainian troops annually over the past seven years. Canadian military trainers repeatedly said one of their aims was to pave the way for full Ukrainian participation in NATO by making its forces interoperable with the rest of the alliance.

Ottawa’s policies have aggravated tensions in eastern Europe. To help ensure the conflict doesn’t escalate even further we need to start asking tough questions of our political leaders.

At a minimum we should be told by our government if Canadian forces are on the ground in Ukraine.

More on Canada's role in Ukraine:

Canada has no way to track the hundreds of millions of dollars of weapons it has donated to Ukraine despite growing concerns such arms could end up on the black market or in the hands of criminals.

The Canadian Forces confirmed it is not taking part in NATO discussions underway to try to deal with the potential issue of arms smuggling from Ukraine.

There are growing concerns that some of the weapons sent to Ukraine have been or will be diverted to the black market. NATO nations have donated billions of dollars of arms and military equipment to Ukraine since Russia invaded that country on Feb. 24.

Today, The Globe and Mail published a short profile of the wife of a colonel in the Azov Battalion. It’s a disturbing article, and functions as outright neo-Nazi propaganda, regardless of the reporter’s intent.

As I wrote earlier this year, “In May 2014, amidst the unrest in Ukraine, the neo-Nazi Azov Battalion was formed as a civilian paramilitary group to combat Russian separatists. The organization has never been shy about its Nazi links and ideology. For example, in a 2015 interview with USA Today, a drill sergeant with the group ‘admitted he is a Nazi and said with a laugh that no more than half his comrades are fellow Nazis.’”

Canadian special forces are in Ukraine as part of a NATO network to provide weapons, training and gather intelligence about the Russians, the New York Times is reporting.

Neither the Department of National Defence nor the office of Defence Minister Anita Anand would comment on the report published Saturday that noted a few dozen commandos from NATO countries, including Britain, France, Canada and Lithuania, had been working inside Ukraine. The United States withdrew its own 150 military instructors before the war began in February.

But the New York Times, citing three U.S. officials, reported that special forces from the NATO countries either remained or had gone in and out of Ukraine since then, training and advising Ukrainian troops and providing an on-the-ground conduit for weapons and other aid.

On Friday, the Ukrainian World Congress (UWC) — a non-profit consortium of organizations affiliated to the world’s Ukrainian diaspora — announced that retired CAF General and former Chief of Defence Staff Rick Hillier will head the new group, alongside other former world military commanders, offering support and advocacy for the country’s 100,000-strong homeland defence militia.

“We will advise on issues on the military side where we could be of support or assistance,” Hillier told the National Post on Thursday.

“We want to be able to help define the very real needs of that territorial defence force, and make sure we meet it in the most precise manner possible.”