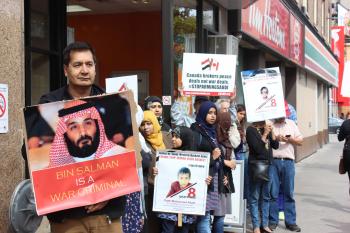 The Trudeau government, which is still weighing whether to suspend shipments in the $15-billion sale of armoured vehicles to Saudi Arabia, has rejected a call from Canadian senators to give human rights and international humanitarian law greater weight in the arms-export control system.

Foreign Affairs Minister Chrystia Freeland, in a letter to the Senate human rights committee, said she could not agree to this or another recommendation that would place additional controls on the end use of Canadian goods by foreign customers to ensure they are not part of serious violations of rights or international humanitarian law.

Ms. Freeland wrote in the letter, dated Nov. 2, that if Canada instituted new export controls unilaterally, it would be out of step with its allies and place Canadian exporters at a disadvantage.

“Export controls are most effective when they are adopted and implemented multilaterally and in co-ordination with our allies,” the minister wrote in response to a June, 2018, report the Senate human rights committee.

“Taking unilateral measures not aligned with the export controls of our allies and partners could severely limit the impact we can have in protecting international human rights and humanitarian law, while putting legitimate Canadian exporters at a significant competitive disadvantage,” Ms. Freeland wrote.

Canada and other countries are considering measures to censure Saudi Arabia over the murder of dissident Saudi journalist Jamal Khashoggi. Prime Minister Justin Trudeau has said Canada is considering suspending export permits in the sale of light armoured vehicles to Riyadh. The Harper government signed the 14-year deal, but the Trudeau Liberals approved the export permits.

Ms. Freeland also noted that the Liberal government is already strengthening export controls by amending the Export and Import Permits Act. The bill to make the changes has not been enacted into law yet. Ottawa argues it would tighten supervision over foreign military sales by obliging the Foreign Affairs Minister to withhold export permits if there is a substantial risk the goods or technology could be used to commit or facilitate a violation of international human-rights law or other acts, including violence against women and children.

The Senate committee’s report called on Ottawa to insert “respect for internationally recognized humanitarian rights and international humanitarian law” into the section of the act that lists the main purposes for which Canada controls exports of goods and technology. The report noted that this would give greater weight to these concerns than the current system, in which guidelines ask Ottawa to consider human rights and international humanitarian law in its export permit assessments, but leave the Foreign Affairs Minister broad discretion to approve exports.

The committee also recommended Ottawa set up more controls over how foreign customers use exported goods or technology.

Senator Thanh Hai Ngo, a member of the committee, said the recommendations are crucial. “If Canada wishes to remain a leader, our export-control regime will need to realistically consider human-rights concerns and international humanitarian law while supporting responsible defence exports.”

Arms control advocate Cesar Jaramillo also expressed disappointment. “It is hard to understand how a government that claims to be committed to more stringent arms-exports controls can reject a measure that is patently compatible with that objective,” said Mr. Jaramillo, executive director of Project Ploughshares. “The argument that Canada’s prerogative to strengthen its arms-exports regulations is somehow contingent upon the legislation elsewhere is not convincing.”

Adam Austen, a spokesman for Ms. Freeland, rejected the notion the government was turning down recommendations from the Senate committee.

“We welcome the Senate Human Rights Committee’s Report, and we have already amended our proposed legislation on arms exports in a way that reflects it,” Mr. Austen said.

“As this legislation is considered by the Senate, we look forward to working with Senators to ensure that human rights are at the centre of our export controls and rules.

The survey also found respondents divided on the existing deal. Forty-six per cent said cancel it and prohibit future weapons sales, and 44 per cent said leave the existing transaction but ban further ones. Another 10 per cent said maintain the current sale and allow future deals with Saudi Arabia.

The online survey polled 1,500 adults from Oct. 24 to 29 and was paid for by the Angus Reid Institute.