Outrage in Haiti over spike in kidnappings 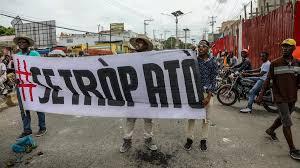 Opposition protesters call for the departure of President Jovenel Moise in Port-au-Prince on November 18, 2020

Staff at multiple Haitian healthcare facilities went on strike Monday to protest the kidnapping of an intern, part of widespread public outrage at a recent increase in abductions on the island.

Hans David Telemaque was kidnapped early Saturday morning in a street near the State University of Haiti Hospital (HUEH), in Port-au-Prince. He was freed Sunday evening following a ransom payment of an unknown amount, local media reported.

"When you leave your home, you have doubts about whether you're going to return. Mothers, fathers, spouses, parents... We all live in daily and constant anxiety," said Bead Charlemagne Charlorin, an HUEH intern who joined the protests Monday in the streets of Port-au-Prince.

In solidarity with the demonstration by interns at the island nation's main hospital, multiple healthcare facilities suspended all non-urgent care activities Monday.

"Every day, at least four cases of kidnapping followed by demands for ransom are recorded. Some parents, they're very rare, talk about it. The majority are content to pay the ransom for their child, for their relative, to get them back," said Marie Rosy August Ducena, of the National Human Rights Network.

Furthermore, residents of the Haitian capital share an atmosphere of panic as members of the police force have been accused of being involved in acts of kidnapping.

"We believe it is up to the inspector general of the national police to intervene, investigate and punish all police officers who are involved at one level or another in the perpetration of these acts," she said.