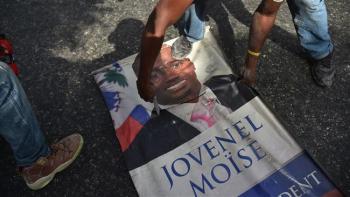 It was 2:15 on Friday afternoon, July 6th, when I got the first WhatsApp message. The Haitian government was going to announce that fuel prices would increase the following day by up to 50 percent. It was also somewhere around the 13th minute of the World Cup quarterfinal match between Belgium and Brazil, the national team adopted by most Haitian soccer fans. Eyes across the country were glued to the TV when the official announcement came late in the game’s second half. Minutes later, Brazil had lost the match. And soon after, thousands of Haitians were in the streets, though not because of the game’s disappointing result.

Roadblocks and burning tires went up in smoke throughout the capital, and soon demonstrations had broken out across the country. By Saturday morning the situation had worsened. International airlines canceled flights in and out of Haiti. Parking lots at many private businesses were turned into car cemeteries. Digicel, the leading cell provider in Haiti, said its fiber optic cables were destroyed, blocking international phone calls, internet usage and other services. Helicopters could be seen evacuating individuals from their rooftops. At least three people were killed.

Less than 24 hours after the initial announcement, the government was forced to cancel the price increases. But the aftershocks of that initial decision have continued to reverberate.

The heads of both chambers of parliament (erstwhile allies of the president) as well as the most powerful private business organization have since called for Prime Minister Jack Guy Lafontant, a doctor and political novice, to resign. The Jovenel Moise administration is now facing its most significant test yet. But how the government found itself backed into this corner is about far more than fuel prices, and reveals as much about the failures of the international community as it does those of Haiti.

On June 20, the IMF issued a statement welcoming “the government's intention to eliminate fuel price subsidies,” a key step in completing the program. The IMF also noted that it “agreed on the importance of implementing key social measures to mitigate the impact of the subsidy reform on the most vulnerable segments of the population.”

According to World Bank research, 90 percent of the benefits from the subsidy go toward the wealthiest segments of the population. But, in a country with 60 percent youth unemployment, a majority of citizens living on less than $2.40 a day, and stubborn double-digit inflation, any increase in the cost of living can be catastrophic. And to make matters worse, kerosene, the fuel that the poor most rely on, was to see the greatest increase.

Donor budget support was the “carrot” to convince the government to take the unpopular decision, an IMF official explained to me before the increase was announced. The savings from eliminating the subsidy could then be used to provide direct subsidies to those most in need, they explained. But, when the IMF team was in Haiti last month, mitigation plans were delayed due to discussions over which ministries would receive the additional funds to be used to subsidize vulnerable sectors. No mitigation efforts were announced alongside the price hike.

A previous fuel price increase in October 2014 involved, according to the World Bank, a three-month media campaign that involved outreach to journalists and labor unions. “The outreach was key to widespread public acceptance,” the Bank noted. But this time, there was no such outreach. Authorities seemed to believe they could make the announcement while everyone was watching the World Cup, and that that would tamper the reaction. It proved to be a deadly mistake.

While the Haitian government has increased its revenue in recent years, it still remains low overall, which is why efforts to increase revenue and allow greater productive investments are justifiable. The government has claimed that the fuel subsidies amount to $160 million in lost revenue. But there are other measures to be taken that could have a similar impact. For example, last year, Haiti lost almost the exact same amount of money from tax exemptions granted to free trade zones, businesses, NGOs and diplomatic missions.

The government, however, has been under pressure to implement the fuel price increases. Though the European Union and Inter-American Development Bank announced in late June that they would begin budget support disbursements, the vast majority of those funds remain tied to the Haitian government proving that it is willing to make unpopular economic reforms. Up to $100 million is on the line. But unpopular economic reforms generate popular reactions. This one has been a long time coming, and now that it has, everyone appears to be trying to take advantage of it.

Moise took office in the midst of a cloud of controversy. His first election victory, back in 2015, was thrown out after an independent commission found evidence of “massive” irregularities, but only after massive protests forced the government — and the international community that supported the initial results and paid for the election – to accept said investigation. In the re-run election, less than 20% of Haitians voted, Moise won again, but was left without a broad popular mandate.

Since, the ruling party, which appeared to have majority alliances in both chambers of parliament, has been besieged by internal power struggles. Former president Michel Martelly, who hand-picked Moise, remains influential behind the scenes — and is, at least according to some diplomatic sources, the most likely next president. But Martelly is also reviled by the political opposition, and even by some of Moise’s newfound allies who have sought to keep the former president at bay.

Lafontant, the Prime Minister now facing calls for his resignation, is widely seen as Moise’s man and has been the target of these various political factions for months already. The calls for a new prime minister that have emerged from the violence of this past weekend are nothing new, and appear to have more to do with which political faction can seize the upper hand than with efforts to formulate a genuine response to the crisis. Nevertheless, Lafontant is set to answer questions before parliament this coming weekend and his job is likely to be on the line.

But regardless of the internal political machinations, or if there is a new prime minister, the protests of this past weekend were a reflection of far more than a poorly handled increase in fuel prices.

Since 2014, per capita GDP has been flat, meaning the average Haitian is no better off than they were four years ago. The local currency, the gourde, has lost more than half its value against the dollar — especially important in a country in which almost everything is imported. After hurricane Matthew destroyed much of Haiti’s southern peninsula — and the crops grown there — in the fall of 2016, food insecurity has increased. And Haiti remains one of the most unequal countries in the world.

As progress stalls, allegations of corruption have picked up — and implicated individuals from every faction of the political and economic elite. The allegations have triggered protests, but little judicial action. Impunity for the political and economic elite appears nearly absolute. Nevertheless, it has fueled the perception that the country’s politicians are more interested in their own bottom line than that of their constituents. So far this year, more money has gone to the two chambers of parliament than has gone to any government ministry except education and justice. The elimination of subsidies was the lit match but the tinder had already been soaked in gasoline.

It was in the 13th minute of Brazil’s world cup game that a ball glanced off all-world midfielder Fernadinho and into his own goal. It was a blunder that Brazil’s team would be unable to recover from. Now, the question is, can the Haitian government recover from its own recent blunders?