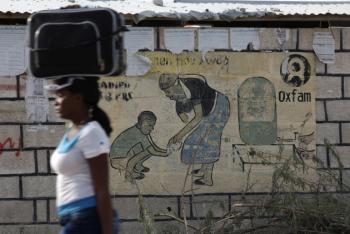 Caption: An Oxfam mural seen on a wall in Corail, Haiti.

Two leading advocates for justice and national sovereignty for Haiti have spoken out about the deeper issues revealed by the sexual abuse scandal overwhelming OXFAM and its conduct in Haiti. Kim Ives is an editor of the Haitian weekly newspaper Haiti Liberté; Brian Concannon is the director of the Institute for Justice and Democracy in Haiti, with offices in Port au Prince, Haiti and Boston, USA. The web-links to both interviews are below.

Some of the world’s largest NGOs and charities are being rocked by similar revelations not only in Haiti but around the world. Several days ago, the International Committee of the Red Cross has confessed that fully 21 of its staff people have quietly resigned since 2015 following revelations of sexual abuse. Western media refers to sexual abuse and assault as “misconduct” when it involves politicians, charities, or NGOs from Western countries.

The interview with Kim Ives, in particular, explains how the large NGOs have played a key role in the imperialist intervention into Haiti. They have supplanted the role of a sovereign Haiti government concerning the planning and provision of social and economic policies. They went so far as to support or turn a blind eye to a paramilitary coup backed by Western governments against Haiti’s elected president, legislature and senate in February 2004.

It is the responsibility of national governments, not NGOs and charities, to provide and implement national and social development policies. But imperialist governments are in the business of blocking national and social development policies in countries in the Global South in order to advance the interests of Western business elites. As part of those Western elites, the owners of mainstream media prevent effective reporting of why countries that are materially poor and underdeveloped find themselves in that position.

The entirety of Western media completed a transformation following the 2004 coup in Haiti to become lapdogs of corporate power. A parallel decline took place among the mainstream NGOs active in Haiti. They presented Haiti as a “failed” country lacking respect or interest in democracy. Haiti – the first and only country to successfully overthrow slavery during its long, national revolution of 1791-1804 – was presented as a country with a “culture” of lack of respect or understanding of democracy. The president who was overthrown in 2004 – Jean-Bertrand Aristide – was falsely presented in this light, as a tyrant with no genuine interest in his people.

* Al Jazeera’s interview with Brian Concannon can be found at here.

* The Real News Network’s interview with Kim Ives (along with transcript) can be found here.

Some excerpts from Kim Ives’ interview:

“The NGOs are really just like the good cops next to the so-called peacekeepers – Haitians call them US occupation troops – which are the bad cops. One carries a gun, and the other carries a pen, but they essentially serve the same empire. They’re both parts of the neoliberal domination of the country. The peacekeepers are there to, in a sense, debilitate the state, and the NGOs are there to fill in the gaps created by that debilitation. The reaction on the official level is now great outrage. They’re shocked, shocked! that such a thing has happened, and they’ve imposed this two-month hiatus in OXFAM’s operations. But it’s really opening an open door, or I should say closing a closed door, because Oxfam Great Britain was not functioning in Haiti anyway. And the other Oxfam organizations of Oxfam International, at least three of them are still functioning in the country. So, it’s a largely symbolic move by the Haitian government to look as if they’re as outraged as everybody else.”

“I was speaking recently to a PhD doctor who has been working in Haiti for 30 years. He estimates that at least 50% of the NGO workers and officials in Haiti engage in prostitution of this nature…”

“I just think we could say that this is almost a distraction, because the harm the NGOs are doing to Haiti is much greater than just using some prostitutes or having some girls over for a party.”

“Why is the country [Haiti] with the most NGOs per capita in the world one of the poorest on the quality of life index, while its neighbor, which has the lowest number of NGOs and the most controlled NGOs in the world, has the highest quality of life? I’m speaking about Cuba. We can really see a correlation between the presence of NGOs and the very difficult life quality. A lot of exploitative things happen. A lot of offensive things happen and I think people’s dignity is basically trampled when these NGOs come to town, along with the peacekeepers…”

“I think the Haitian people are capable of self-determination… They built a country 200 years ago in 1804. They created many institutions. They created industries, agriculture. But the arrival… of the U.S. Marines in 1915 really marked the beginning of a long descent of Haitian agriculture, and industry and culture even. We’re really almost at the nadir now, I believe, …with these NGOs who are in there supposedly to fill the void. If they were gone, if the peacekeepers were gone, if all the U.S. and European oppressive presence was gone, I think Haiti would be fine.”

The original version of this article was published on Roger Annis’ website A Socialist in Canada. Annis was a longtime editor of the website of the Canada Haiti Action Network, founded in 2004. The website is now called the Canada Haiti Information Project and contains a vast archive of articles and documents on the history and current politics of Haiti. He has written extensively on Haiti and traveled twice to the country on reporting missions – in 2007 and 2011.