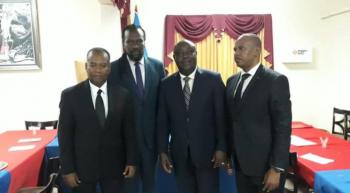 Haitian opposition senators have set new conditions to hold the ratification session for Prime Minister nominee Fritz William Michel and his cabinet, after orchestrating a boycott of the session last week, it was reported on Sep. 17.

In a letter addressed to Senate speaker Carl Murat Cantave, the so-called “Group of Four” – senators Evalière Beauplan (PONT), Antonio Chéramy aka “Don Kato” (VERITE), Ricard Pierre (Piti Dessalin) and Nenel Cassy (Fanmi Lavalas) – demanded to set up a committee to investigate a recent vote-buying scandal in the Senate. Bribes were also distributed in the House of Deputies, which approved Michel on Sep. 3, according to some reports.

Sen. Sorel Jacinthe (Inite), a former government ally, charged last week that the government distributed about $500,000 to five Senators to secure their support. Michel and others implicated denied the accusations. Jacinthe also says that speaker Cantave offered him a $100,000 three times to vote for Michel, but he rebuffed the bribe.

The opposition bloc also demands a conference of presidents of Senate Committees be held to raise and solve the problems that afflict the institution, as well transmit the file of embezzlement of state funds to the National Audit Office, and others related to irregularities in contracting national identification cards.

Although Michel secured the deputies’ confirmation, he needs the Senate’s approval to become the head of Haiti’s government.

The last approved Prime Minister, Jean Henry Céant, was voted out of office by the deputies on Mar. 18.