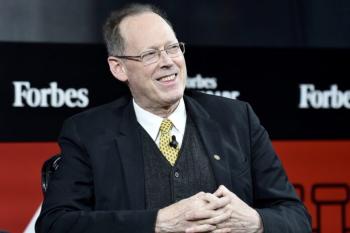 Paul Farmer, a co-founder and principal face of Partners In Health, died in Rwanda this Monday.

r. Paul Farmer, 62, the world-renowned global health physician, social medicine activist, and medical anthropologist, died on Mon., Feb. 21, 2022 “in Rwanda from an acute cardiac event while he was sleeping,” according to a press statement by Partners In Health (PIH).

Born Oct. 26, 1959 in North Adams, MA, Farmer spent most of his formative years under difficult circumstances in central Florida with his parents and five siblings, living at times in a school bus converted into a mobile home and on a boat.

On his trips to Haiti and in interactions with professors, co-workers, and classmates during these years, Farmer began to formulate and articulate his life mission.

“There are all these ideas, for example, ‘appropriate technology’… [which] means ‘shit for poor people and good things for rich people,’” he said during one of his late night discussions with friends at Harvard, shown in “Bending the Arc,” a 2017 documentary on his life. “Basically, in the end, they are all used to punish poor people, just like every other ideology is by and large.”

This “non-ideological” vision motivated Farmer to take on a missionary role seeking to reform the capitalist market forces which ignored the health of the world’s poor. He hoped to convince that system’s political, economic, and medical establishments that affordable, universal healthcare was not only feasible but preferable.

“My goal is to help people in the here and now,” he told a journalist in the halls of the United Nations in March 2010, two months after a 7.0 earthquake had leveled much of metropolitan Port-au-Prince, “not at some point in the indeterminate future.”

At that time, he was the deputy to the UN Special Envoy to Haiti, former President Bill Clinton, who oversaw the misspending of some $13 billion in earthquake relief. That role, probably more than any other, earned Farmer the opprobrium of Haitian leftists, who saw his pragmatism and cooperation with U.S. government officials and arms like billionaire financier George Soros’ Open Society Foundation and the Agency for International Development (USAID) as harmful and counterproductive.

The tension became particularly sharp in 1994, when Farmer, who had long been an ally of then exiled President Jean-Bertrand Aristide, endorsed the U.S. military intervention and occupation of Haiti as a way to end the three year coup d’état which had uprooted Haiti’s first democratically elected head of state in 1991. Haitian anti-imperialists were outraged by the stance, prompting prominent leftist intellectual Franck Laraque to bitterly challenge Farmer as he made a presentation at a conference at Pétionville’s Hotel Kinam in late 1994.

But Farmer’s outlook was informed by the success he and his PIH colleagues had achieved in overcoming the U.S. medical elite’s opposition to their approach of offering cheap or free medicine and healthcare to the world’s poor for diseases like tuberculosis and HIV, beginning with Haiti.

But over the next two decades, the medical establishment did come around to adopting, or at least borrowing some elements of, the PIH approach, earning Farmer and his colleagues prizes, accolades, and praise from the media, books, and movies.

A turning point came in 2003, when President George W. Bush launched the President’s Emergency Plan for AIDS Relief (PEPFAR), which, according to the U.S. Government “invested over $100 billion in the global HIV/AIDS response, saving over 20 million lives, preventing millions of HIV infections, and supporting several countries to achieve HIV epidemic control.”

“PAUL TAUGHT US TO FIGHT FOR JUSTICE WITH GREAT PERSISTENCE, BUT ALSO WITH GREAT HUMANITY AND SOLIDARITY”

“It was an incredibly gutsy decision to make,” said Jim Yong Kim, perhaps Farmer’s closest friend and collaborator, who went on to head the World Bank from 2012 to 2019. “As far as we can tell, it was done on the basis of compassion.”

But some critics question whether the PIH model and approach has been coopted to better disguise the predatory practices of U.S. medical capitalists, better known as Big Pharma.

(PEPFAR, in fact, bolsters the worldwide distribution of more expensive U.S. pharmaceutical drugs against market inroads made by cheaper generic drugs, according to an article by the International Consortium of Investigative Journalists. The author argues that it “hinders treatment in generic terms” and results in “greater use of high-cost drugs at [the] expense of helping fewer patients.”)

Despite his inroads into the U.S. power structure and Harvard’s hierarchy, Farmer maintained a healthy esteem for and collaboration with Cuba.

“Haiti has the highest infant mortality rate in the hemisphere, Cuba the lowest,” he wrote in his 2003 book Pathologies of Power: Health, Human Rights, and the New War on the Poor, in which he compared the two  neighbors. “In fact, infant mortality in the Mission Hill neighborhood, merely yards from the front door of the Brigham and Women’s Hospital in Boston, compares unfavorably to rates in Cuba. The leading killers of young adults in Haiti are HIV and tuberculosis; Cuba has the lowest prevalence of HIV in the hemisphere and remarkably little tuberculosis. Typhoid, measles, diphtheria, dysentery, polio, malaria, and most other parasitic infestations – are all common in Haiti and almost unknown in Cuba. And so on.”

Farmer  nominated Cuba’s “Henry Reeve Brigade” (formally, the International Contingent of Doctors Specialized in Disasters and Serious Epidemics) for a Nobel Peace Prize and worked closely with the Cuban doctors deployed across Haiti to open in 2013 a modern teaching hospital in Mirebalais, not far from Cange.

From Pathologies, one learns that Farmer saw Cuba as a model for “health equity” – equal access to quality healthcare – which is “a necessary component of any discussion of medical ethics,” the core of his belief system.

“GREATNESS OF SOUL, LOVE OF HUMANITY, AND DEVOTION TO THE POOR KNOW NEITHER COLOR NOR BORDERS.”

The author of over 200 scientific papers and eight books, Paul Farmer was a voracious intellect with a wry sense of humor, who clocked hundreds of hours traveling on jets between Boston, PIH facilities around the globe, and international conferences.

He is survived by his Haitian wife, Didi Bertrand Farmer, and their three children.

“Paul taught us to fight for justice with great persistence, but also with great humanity and solidarity,” wrote Brian Concannon, Jr., the executive director of the Boston-based Institute for Justice and Democracy in Haiti (IJDH), of which Farmer was a co-founder and board member. “He taught us that the people experiencing human rights violations are the real ‘experts’ in explaining the causes of their suffering and identifying solutions, […] that our education, experience and skill are only helpful if we are supporting their fight,… that injustice inflicted on the poor is structural, and that addressing the injustice requires relentlessly attacking the powerful interests behind these unjust structures… Paul’s passing is a great loss to the multitudes of people he has treated, befriended, supported, and inspired in Haiti, the United States, and throughout the world.”

Prolific Haitian intellectual and Haïti Liberté columnist André Charlier wrote: “I learned with great sadness of the death of Dr. Paul Farmer. Greatness of soul, love of humanity, and devotion to the poor know neither color nor borders. In a world where the hunt for the Dollar God has become the norm, we need men and women like this Doctor of the Poor to reassure us that all is not yet lost for the human species. May he continue to be an inspiration and an example to all.”