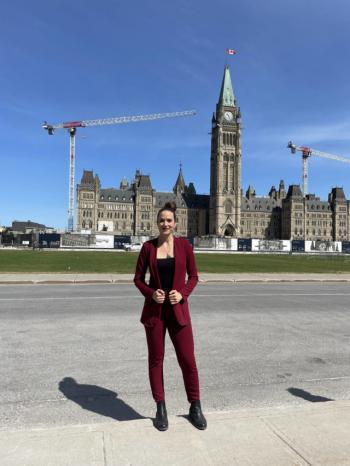 Morgan Wienberg is seen outside the Parliament building in Ottawa on May 13 where Yukon MP Brendan Hanley presented a petition led by Wienberg to end support for foreign orphanages. (Kelly Milner/Submitted)

Yukon MP Brendan Hanley presented the House of Commons with a petition bearing 500 signatures that calls on the federal government to take action against the support of foreign orphanages and to meet its obligation under the UN Declaration of the Rights of the Child.

The petition, presented May 13, was led by child and family advocate Morgan Wienberg and the filmmakers behind the documentary about her work in Haiti titled Not About Me.

Wienberg, from Whitehorse, is the executive director and cofounder of Little Footprints Big Steps, an organization in Haiti focused on building families and communities through reunification of children with their families, as well as running support programs to help families.

In a May 19 interview, Wienberg thanked the many Yukoners who signed the petiton and described seeing it presented in the House of Commons as an “exciting first step” which she hopes will result in greater awareness and eventual policy change.

Wienberg said many are unaware of the situation and sign up with the best of intentions to volunteer at orphanages around the world.

Such was the case for her. After graduating from F.H. Collins Secondary School in 2010, Wienberg travelled to Haiti to volunteer at an orphanage. There she came to learn about the corruption in many orphanages and began working to help protect children and reunite them with their families, eventually founding the Little Footprints Big Steps organization.

In 2020, Shot In the Dark productions released Not About Me, detailing Wienberg’s work, and later working with her on the petition.

While Wienberg is clear there are orphanages that may be well run, she said growing up in institutional care — even when it is well run — has been found to be damaging. She also pointed to the importance of Canada meeting its commitment under the UN declaration, which includes a special resolution to end the institutionalization of children by 2050.

In Haiti, legislation has been passed to prevent new orphanages from opening up, Wienberg said.

Advocacy has been a major part of her efforts with Wienberg addressing a variety of organizations like the UN Youth Assembly, international conferences and more in calling for an end to orphanages.

Wienberg said she was pleased to speak with several MPs, after the petition was presented, who wanted to know more about the issue and the work being done.

For his part, Hanley said he was pleased to present the petition.

“It’s time for Canada to rethink and reform our support for foreign orphanages,” he said. “As an MP, it is encouraging to see Canadians engage our government to advocate for change. This petition is an important milestone in the process of making change happen.”

The government is required to respond to the petition within 45 days.

Among them she cited a ban on “volunteerism” to orphanages or, at least, travel advisories to warn against them.

She also hopes the effort will help redirect those who have been well-intentioned in supporting international orphanages to find ways to better support more family-focused care that will help families, who might have otherwise sent their children to institutional care, stay together.

As Wienberg continues her efforts in Haiti, Little Footprints Big Steps has grown, with the organization recently working to better define its seven programs that have developed since she got started.

A new coalition made up of four family-focused organizations including Little Footprints Big Steps was also recently launched in an effort to provide resources, training and information to those working with families in Haiti, she said.