This physician has battled epidemics, quakes, and poverty in Haiti. Now, she's taking on COVID-19 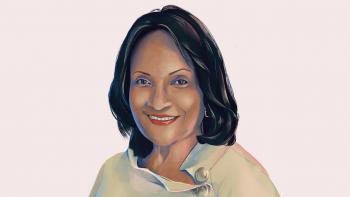 “Every time you make progress … you are pushed back by either a natural or political catastrophe,” says Marie Marcelle Deschamps. KATTY HUERTAS

Marie Marcelle Deschamps remembers the first patient with COVID-19 to visit a clinic she runs in Portau-Prince, Haiti. It was late March. His blood oxygen saturation, normally above 90%, was 35%. The 45-year-old man died within 1 hour. “Oh my God,” she recalls telling her colleagues. “It’s here.”

As the director of a major health care organization in Haiti, Deschamps was already stretched thin by the struggles of providing medical help in one of the poorest nations on Earth. Her clinic was soon seeing thousands of COVID-19 cases per week, and her days became consumed with treating patients, supervising the other doctors, and dispatching teams to provide care and counseling to people in Haiti’s urban slums and countryside.

Those who have met Deschamps (including this reporter) know her as amazingly warm, bright, and charming. Clinic staff, patients, and even strangers greet her fondly as she rushes past. The need for women to take an increasing role in Haiti’s health care has long been identified as a key to economic development, and after 4 decades of practicing medicine in her native country, Deschamps is seen by many as an icon and a role model. “She is inspiring,” says Sandra Lamarque, head of mission in Haiti for Doctors Without Borders.

Jean William Pape, founding director of GHESKIO, the private nonprofit health organization Deschamps now heads, credits her for introducing multiple programs that have improved women’s health and wellbeing, including ones that care for victims of sexual assault, guide poor women in obtaining microcredit loans to start businesses, or help them get their children into schools. “When she sets out to solve a problem, it gets solved,” says Pape, who now co-directs Haiti’s response to COVID-19.

Deschamps decided on a career in medicine after witnessing her father die a slow death from kidney failure. “I had such a desire to become a good doctor,” she says. The beginning of her career coincided with the huge outbreak in Haiti of the disease that came to be called HIV/AIDS, before there were meaningful treatments. She recalls telling her husband, “I am signing so many death certificates I hope that one day people won’t judge me for being a bad doctor.”

In the early days of the HIV/AIDS crisis, a group of senior Haitian and U.S. doctors chose Deschamps to study in the United States, where she did fellowships in Anthony Fauci’s lab at the National Institute of Allergy and Infectious Diseases, Walter Reed military hospital, and the Centers for Disease Control and Prevention. On her return to Haiti, she and Pape expanded GHESKIO. It grew from humble origins in a tiny building across the street from an enormous slum known as City of God into a health organization that now treats more Haitians with HIV/AIDS and tuberculosis than any other group in Haiti, as well as caring for people with myriad other maladies.

Deschamps sees COVID-19 as just the latest chapter in the Haitian saga. “Every time you make progress, finding the solutions, you are pushed back by either a natural or political catastrophe,” she says. “You are always in a situation of crisis where you have to act rapidly.” After the devastating 2010 earthquake, Deschamps’s clinic allowed hundreds of slum dwellers whose shacks had collapsed to camp on its property. She and her colleagues circulated among the injured treating horrible fractures and other injuries.

Soon after the earthquake, U.N. troops from Nepal unknowingly brought a cholera epidemic to Haiti that sickened more than 800,000 and killed more than 10,000 over several years, putting enormous additional stress on all of Haiti’s health facilities, including Deschamps’s clinics. “The country has been very vulnerable,” Deschamps says, citing threats as diverse as political destabilization, impacts of deforestation on farmland and drinking water sources, hurricanes, and a never-ending procession of infectious diseases. “Now COVID,” she says with a laugh. “So, I said to my myself, what is it we have not seen finally.”

Until Deschamps saw her first COVID-19 patient in late March, Haiti’s poverty and isolation had kept it relatively safe from the pandemic. The government had taken precautions, closing the international airport and shutting down businesses. Two infected travelers, one from the United States and one from Europe, had been discovered and quickly isolated.

But the patient in her clinic—and others who quickly followed—had been working at hotels in the Dominican Republic, which shares a porous border with Haiti on the island of Hispaniola. Because it is a popular winter tourist destination for people from the northeastern United States and Europe, the Dominican Republic got hit hard and early with COVID-19. More than 30,000 Haitians lost their jobs there and were either forced out or fled home—some bringing the virus with them. Another 300,000 had commuted back and forth for occasional work.

For several weeks, Haiti saw large numbers of COVID-19 cases, often overwhelming the relatively few available hospital beds. Because many Haitians lack shelter, food, and medical care, the United Nations Economic and Social Council warned that COVID-19 could trigger a humanitarian catastrophe, a theme echoed in a letter co-authored by Deschamps and published on 16 June in The New England Journal of Medicine titled Facing the Monster in Haiti.

The letter warned that stigmatization—once directed against those with HIV—was now impeding care for those with COVID-19. Health care workers have endured threats and had stones thrown at them. Some patients have been driven from their homes and shunned by relatives, forcing them to live on the streets. Deschamps has directed community health workers to try to combat stigma and educate people about safety measures, but she acknowledges it isn’t easy. “How can you ask someone to adopt proper distancing measures when five people are living in one room?”

So far, however, the worst predictions haven’t come to pass. Although testing and surveillance is limited, the official number of confirmed cases declined from almost 300 per day in mid-June to about 100 in mid-July. As of 9 August, Haiti had reported only 183 COVID-19 deaths in its population of 11.2 million. Deschamps says that even at current levels COVID-19 represents a huge burden, but she is “hopeful and skeptical at the same time” about the future.

Some other resource-poor countries have reported similar declines in cases. Global health experts have speculated that those countries may benefit from relatively younger populations, shanties that though crowded are well-ventilated, or a more effective early immune response to COVID-19 because of the many other infections people face. “We just don’t know the reasons for this but it is a very intriguing question,” says immunologist Barry Bloom, former dean of the Harvard T.H. Chan School of Public Health.

Although she could live and practice medicine anywhere, Deschamps insists she’ll never leave Haiti. “This is my place,” she says. Haitians are resilient, she says, in spite of all they’ve endured. “It’s not that we forget … [but] we are always looking for the light.”