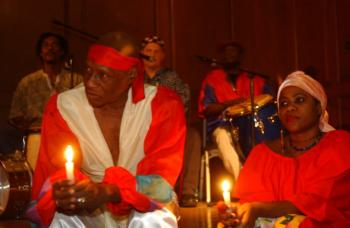 His death came only one day after the Apr. 12 death of his close friend, rasin musician Jacques Maurice “Wawa” Fortéré, 82, who also died at Brookdale Hospital from the new coronavirus.

Desrameaux was born on Aug. 6, 1928 in Pétionville, Haiti to a farmer, Démosthènes Desrameaux, and a market woman, Fleurina Dorléance Alphonse. His father worked in Delmas, which was then still largely rural, but the family lived in the hillside Port-au-Prince neighborhood of Belair, where some Vodou temples trace their origins back to pre-independence Haiti.

Born during the final years of Haiti’s first U.S. military occupation (1915-1934),  Desrameaux had childhood memories of U.S. Marines passing on horseback while he played, and he recalled that his father was a kako, a Haitian guerilla fighter who resisted Washington’s invasion.

Under the racist U.S. Marine regime, Haiti’s African heritage was repressed and denigrated, sparking a movement among Haiti’s intellectuals and artists to study, defend, and promote the nation’s unique traditional culture, in particular the religion and value system of Vodou.

Although he was raised Roman Catholic, like many Haitians, Desrameaux also participated in Vodou ceremonies and rituals, where he learned Haiti’s rich repertory of traditional dances.

In his mid-teens, Desrameaux met Siméon Benjamin, director of a choir named Aïda, for the Vodou rainbow spirit. Benjamin’s choir rehearsed in Desrameaux’s Belair neighborhood, and he was scouting for dancers. After performing a version of the peasant dance djouba for Benjamin, Desrameaux became one of the troupe’s first dancers.

The young artists who were recruited learned from one another, piecing together a repertory from what each was able to contribute. Desrameaux went on to choreograph the dances of Vodou, Carnival, and other Afro-Haitian performance traditions for the company.

In 1946, Haitian nationalist Dumarsais Estimé was elected president. His government supported Haiti’s African heritage and, in 1948, began planning an international exposition celebrating the bicentennial of Port-au-Prince’s 1749 founding. The Estimé government constructed the Cité de l’Exposition, an exposition complex on the capital’s waterfront. Besides a hotel, gardens, offices, ministries, and national pavilions, the complex included a national theater. In December 1949, the year Haiti hosted a world’s fair, La Troupe Folklorique Nationale, a new state-sponsored folklore troupe, opened the exposition in the new theater. Dancer Jean-Léon Destiné had built the new company from the best performers of existing folklore troupes, like Aïda. Desrameaux thus joined La Troupe Folklorique Nationale and performed for it until it disbanded in 1984.

Having become a recognized professional dancer, Desrameaux performed for several companies in the decades following the national troupe’s debut. Photographs of him dancing appear in Lavinia Williams Yarborough’s Haiti-Dance (1959). The dance companies took him to all corners of Haiti, and he traveled to perform outside the country in Puerto Rico, Saint Croix, Saint Martin, Belgium, Canada, the United States, and once in Africa.

He supplemented his performance career with teaching, notably at the L’École de Danse de Viviane Gauthier, named after one of the pioneers of Haitian dance. Unlike many of his compatriots who opted to reside abroad, he always returned to Haiti. In 2001, the United States granted him a permanent visa. He then divided his time between Haiti and New York, where he has several children and grandchildren. In all, he had 21 children, and he was married once.

From the 1980s, Desrameaux worked with La Troupe Makandal, the New York-based Haitian dance company (under the direction of the late Frisner Augustin until 2012). He coached its dancers and performed with the Troupe on occasion.

In 2010, he served as special consultant for Makandal’s Haiti Drum and Dance, a series of performances and workshops that presented the full range of dances documented in the 1940s and 1950s during the folklore movement’s heyday. Video recordings of both that project and a five-part workshop he conducted for the company in 2004 capture his legacy and will go online soon.

In recent years, Desrameaux could often be found at the Sunday evening cultural rehearsals held by the group Granchimen at the office of La Différence Auto School on Rogers Avenue in Brooklyn. He would usually be joined by his famous friend, the Vodou musician Wawa, as they passed on their wisdom and experience to new generations of Haitian (and North American) dancers, drummers, and musicians.

Their spirits live on in the hearts and memories of all those whom they touched with their artistry and passion.

Lois Wilcken is a member of La Troupe Makandal.