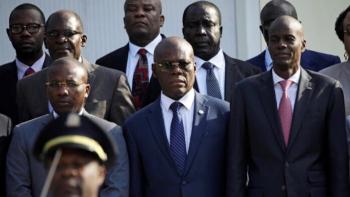 After a year and one month in the post, Joseph Jouthe (center) resigned as Haiti’s Prime Minister on Apr. 13 by letter to de facto President Jovenel Moïse (right). He was replaced by Foreign Minister Claude Joseph (left).

“I regret to tender to you my resignation as Prime Minister for personal reasons,” the letter read. “This decision is effective from the date hereof .”

HIS MAR. 10 THREAT TO RESIGN WAS A REACTION OF EMOTION AND PRIDE AT BEING PUBLICLY CRITICIZED BY HIS GOVERNMENT’S SUBORDINATES.

It appeared that his Mar. 10 threat to resign was merely a reaction of emotion and pride at being publicly criticized by his government’s subordinates.

But this time, it looks like an irreversible decision, coming at a time when the government is in a very difficult political situation.

“At this stage, the process is not sufficiently inclusive, participatory, or transparent,” the BINUH tweeted in French on Apr. 13. “National ownership of the draft constitution requires the engagement of a wider range of political, societal, including women’s and religious groups across the country.”

Given the government’s increasing unpopularity and isolation, this is an almost impossible task.

It should also be noted that during a press conference at his official residence on Mon., Apr. 12, Jouthe Joseph had publicly confessed his dissatisfaction with his government’s fight against insecurity. He should have said his incapacity to fight it.

Jouthe was appointed to his post on Mar. 4, 2020 and has been replaced by Claude Joseph, Haiti’s Foreign Minister.