Political crisis in Haiti could lead to president ruling single-handedly 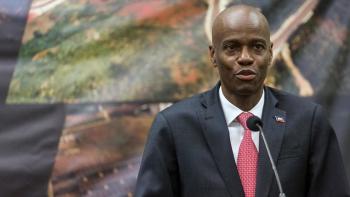 Haiti's President Jovenel Moise delivers a speech during the inauguration of the Taiwan Fair in Port-au-Prince on July 13, 2019. © Pierre Michel Jean, AFP

Haitian President Jovenel Moise could be ruling by decree later this week, a scenario he said would help break the Caribbean nation's political deadlock but which critics fear will undermine its fragile democracy.

In the early hours of Monday, the president said the mandates of lower house deputies and most senators formally expired because no successors were elected in October after the troubled country failed to hold elections.

The power vacuum could deal a significant blow to democratic governance in the poorest country in the Americas, three decades since the end of the dreaded Duvalier family dictatorship.

Moise, however, sees the sidelining of Haitian lawmakers as positive.

"The current situation is an opportunity to stop the permanent crisis," said Moise, who has come under pressure from months-long street protests and opposition groups to resign or hold early elections.

"The biggest problem Haiti has is the weakness of its public institutions," Moise told Reuters in an interview.

Moise blamed parliament for having failed to approve the electoral law required to hold last year's elections while his opponents accuse him of trying to take control over the country's electoral law.

Under his predecessor, Michel Martelly, the Haitian parliament was dissolved in January 2015 when last-ditch negotiations for a deal that would have extended lawmakers' mandates failed.

Martelly ruled by decree until the end of his term.

"Without the opposition, the government seems less legitimate," said Jake Johnston, a senior research associate at the Center for Economic and Policy Research in Washington.

"Will he make efforts to work for the whole or will he just pursue his own agenda without checks and balances?"

A former banana exporter, Moise is nearly three years into his five-year term. He won an October 2015 election that was later scrapped over fraud allegations; in January 2017, he was declared president after a repeat election in November 2016.

Moise's political base has been weak from the start. Electoral turnout for the 2016 election was low and 10% of sheets tallying votes were thrown out because of irregularities. In a country of 10 million people, he got just 600,000 votes.

"He won an election, but there's a question around how much of a credible and legitimate mandate that provided him given the extremely low turnout and the lack of faith in the democratic process to begin with," Johnston said.