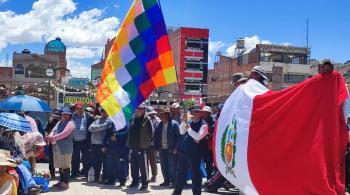 71% of Peruvians disapprove of the unelected President, Dina Boluarte, says a new poll by the Institute of Peruvian Studies (IEP). The same survey shows that 60% consider the anti-coup protests to be justified.

The country’s congress, which carried out the coup against Pedro Castillo, has an even higher rate of rejection, the IEP stated, “At the beginning of 2023, the Congress of the Republic is only approved by 9% of respondents, while 16% approve of the president of Congress, José Williams”. These figures represent an increase in the disapproval rating of 8% compared to the previous month.

Regarding the anti-coup protests and ongoing general strike, 60% consider the mobilizations to be justified, among young people that rises to 72 percent. 58 percent said that there has been repression, by the regime, against protesters.

Peru has experienced mass protests ever since the coup against Pedro Castillo last December, their demands are; resignation of the coup regime, new elections, constituent assembly, and the release of Pedro Castillo (currently detained without charge in Lima). The new regime has killed almost 50 protesters, mostly in the indigenous Andean regions in the south of the country.

Thousands of protesters from the south are expected to arrive in Lima tomorrow to demand the resignation of Dina Boluarte in what is the biggest escalation in these protests yet. Many fear a new round of repression leading to many more deaths.

For more news and analysis, check out our podcast Latin America Review: https://linktr.ee/latinamericareview