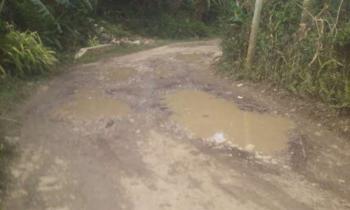 A section of the road between Borgne and Petit Bourg de Borgne. Jovenel Moïse’s companies did little or no repair work on the road despite being paid twice for it. Credit: CSCCA

In its second bombshell report released on Fri., May 31, 2019, Haiti’s Superior Court of Auditors and Administrative Disputes (CSCCA) has charged two companies belonging to Haitian President Jovenel Moïse with “collusion, favoritism and embezzlement,” directly linking the embattled head of state to massive corruption in the spending of about $2 billion from Haiti’s PetroCaribe Fund.

The CSCCA details how Moïse’s companies Agritrans and Betexs (which were effectively the same company with identical staffs, agreement numbers, patent numbers, and tax identification numbers) received about $1.65 million in similar contracts to repair the same stretch of winding dirt road between the northern town of Borgne and the small village of Petit Bourg de Borgne. Agritrans was paid 39,990,399 gourdes ($894,640) and Betexs got 34,998.785.50 gourdes ($752,662), but both apparently did nothing or, at the most, very little.

Having “serious doubts about the reality and the effectiveness of the work on this road” and “in order to dispel doubts, the Court visited the site,” the CSCCA wrote in its report. What they found was “a huge gap between the amounts spent and the reality of the work that was supposed to have been done.” The report contains pictures of the unrenovated dirt road.

Even more outrageous was that in August 2014, the Haitian Public Works Minister advanced Agritrans 19 million gourdes ($359,168) months before a bid was made or a contract signed.

“Disbursing funds for a project before the conclusion and signing of the contract, in addition using them for other purposes, is abnormal or illegal,” the court stated in its report.

President Moïse has yet to respond to the report. More demonstrations are planned in the coming days to demand prosecutions for the financial crimes the Court revealed. The disclosures have also renewed and reinforced the long-standing calls for Moïse’s resignation.

The CSCCA had issued a first report on PetroCaribe corruption in January. In that report, the Court had raised questions about the PetroCaribe-financed “Ban’m Limyè Ban’m Lavi” (Give Me Light, Give Me Life) project, in which it found irregularities and a lack of documentation. Jovenel Moïse’s solar company Comphener S.A. received 4,875,148.41 gourdes ($111,305) for installing solar panels on street lamps under that questionable project.

From 2008 to 2018, Venezuela provided Haiti with $4.3 billion in cheap oil. Haiti was able to put 40% of the oil revenues in the PetroCaribe Fund, repayable after 25 years at 1% interest. It was supposed to pay for social benefit projects like schools, clinics, and roads.

The CSCCA’s 612 page report contains numerous other examples and details of government corruption and mismanagement, which we will return to in the coming weeks. The Court reviewed only 77% of the PetroCaribe funds spent, lacking documentation for 23%, and looked at the period from September 2008 to September 2016.