Production of baseballs in Haiti and U.S. imperialism 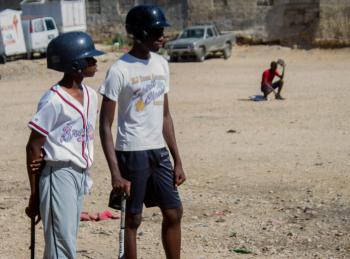 Although some youth play it, baseball remains a marginal and misunderstood sport in Haiti. Credit: Milo Milfort/Enquêt’Action

Throughout history, Enquet’Action has found a certain insistence on wanting to establish baseball in Haiti. An insistence that has always found some resistance that did not have basketball and volleyball. From American cultural imperialism to the dedication of a specific place in Haiti in the international division of labor – with the establishment of subcontracting industries here and there, the different strategies could not give the expected results. And baseball remains a marginal sport.

After the U.S. Marine occupations in 1906 of Cuba and in 1916 of the Dominican Republic, the youth of these two countries – like those of many other territories occupied by the Americans – adopted baseball as their principal sport.

But in Haiti, the people rejected this initiative despite all the conditions being met because baseball supplanted football during the first years of the 1915 U.S. occupation at a time when the only soccer stadium was closed.

From the 1960s until the 1990s, although we did not play baseball, the balls of this sport were made in Haiti. Thus, the second phase of the U.S. offensive to establish baseball in Haiti was through the establishment of industries producing baseballs in the country.

With the Monroe doctrine advocating America to Americans, baseball was a tool of penetration and acculturation.

Haiti was the exception at a time when no less than a dozen factories manufacturing baseballs dotted the region of Port-au-Prince. In the 1970s, Haiti was the world’s largest producer and exporter of baseballs while the sport was not practiced in the country.

Haiti did not play baseball but was exporting more than 20 million balls each year. It was the first such case in world history. “This shows once again, the indecency and nonsense surrounding the extractivist policy promoted in the country for several decades by the Haitian authorities,” said the professor and sociologist Auguste D’Meza.

This only reinforced Haiti’s dependence on foreign countries, he noted. This strategy was in line with Washington’s aim to make Haiti the “Taiwan of the Caribbean” under the Duvalier dictatorship of the 1960s and 1970s.

Baseballs at the heart of Haitian poverty and American wealth?

The production of toys, clothes, electronics, and women’s underwear is Haiti’s current role in the international division of labor. We went from 13 outsourcing companies in 1966 to 240 at the end of the 70s. Not an insignificant leap!

As a assembly plant haven, Haiti, alongside Honduras and Costa Rica, was among the greatest producers in the world making baseballs for the U.S. market.

They were sewn by hand, like the first baseballs, above all, by cheap female labor – six times cheaper than the Puerto Rican labor force. The salaries of the world’s best baseball makers were miserable and people slaved in inhumane conditions.

Each ball was sewn with 108 stitches and each worker was expected to sew four balls per hour.

“In Haiti, they were making around 30 cents an hour,” wrote Perrin Banzeu in his essay the Cements of Africa to the Conquest of Cameroon, adding that despite this meager salary, they had to meet the precision requirements of a machine-made product. “Some reports put forward numbers as high as 14 cents per hour in the mid-1990s.”

The baseballs retailed at around $15 each. The author believes that poverty in Haiti and wealth in the United States was, for both countries, both a cause and a consequence of the production choice they made. For his part, in the book “Political Power in Haiti from 1957 to the Present,” Etzer Charles talks about Haitian Manufacturing, which produced baseballs and employed 300 people. It was one of the largest industrial enterprises in the 1970s.

“Haitian industry is a manufacturing industry,” he writes, noting that these are generally assembly workshops (or subcontracting) and thus not really articulated into the national economy. “And in the 1970s, many foreign companies, taking advantage of the tax breaks and cheap labor of the country, established their subsidiaries” in Haiti.

The production of baseballs and softballs amounted to 2.145 million dozens – valued at more than 96,451,000 gourdes ($19.3 million) in 1984, according to the Haitian Institute of Statistics (IHSI) in its quarterly bulletin released in 1987.

Decline and failure of the attempt?

As a result of political problems in Haiti – notably the embargo imposed by the United States on Haiti in 1991 – much of the production was transferred to Honduras and Costa Rica. Until about 1996, there were no fewer than three assembly factories offering 447 jobs for the production of baseballs. That fell to two factories in 1997, which offered 442 jobs.

These companies left and moved to other countries in Central America. The pretext, according to sociologist Auguste D’Méza, was that the increase of the minimum wage demanded by trade unionists was too high.

If the first American occupation (1915-1934) tried unsuccessfully to import baseball into Haiti, the second U.S. occupation in 1994 also failed. Even the establishment of baseball factories in the 1960s and 1970s was not able to help the sport grow.

Did the 2010 earthquake, one of the most traumatic events experienced by the Haitian people, offer a breach to again reintroduce it? The sport of baseball now exists in Haiti. Some young people practice it. But, baseball remains a marginal and misunderstood sport.

Sport in general is in decline in Haiti, like all societal structures. Soccer is struggling to take off when it has been played for more than 100 years and requires little infrastructure.

The future of an expensive sport like baseball remains uncertain in Haiti. The soft penetration of baseball into Haiti today symbolizes not only the persistence of American cultural imperialism but also is a sign of the weakening of anti-imperialist resistance movements in Haiti.

ENQUET’ACTION is an online journalistic investigation, multimedia journalism and background journalism media, created in February 2017 in Port-au-Prince and officially launched in June 2017. Focused on quality journalism that believes in free access to information, it aims to become an indispensable source of information for national and international media, as well as for the public. It was born from the desire to reconnect with the fundamentals of journalism which seeks the quest for truth to allow the press to truly play its role of counter-power.