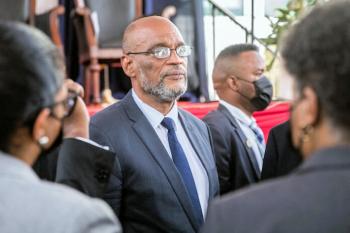 Prime Minister Ariel Henry at his Jul. 20 swearing-in. He called the prosecutor’s summons to explain calls he made to a Moïse assassination suspect “diversionary.” Photo: Valerie Baeriswyl/AFP

Haiti’s chief prosecutor has called for charges against Haitian Prime Minister and de facto leader Ariel Henry for his alleged role in the Jul. 7 assassination of President Jovenel Moïse.

Henry is now not allowed to leave Haiti following a travel ban order signed by Claude and addressed to Haiti’s immigration director Joseph Cianciulli, which was leaked to social media on Sep. 14.

Henry “is prohibited from leaving by air, sea, and land the national territory for serious presumptions of assassination of the President of the Republic Mr. Jovenel Moise,” says the document.

On Fri., Sep. 10, Prosecutor Bed-Ford Claude had invited Henry to an interview to question his connection to a major suspect in the assassination. The meeting was scheduled to take place on Tue., Sep. 14 at the Court of First Instance, usually used for preliminary questioning of suspects who have been arrested.

After Henry failed to show up at the hearing, the Associated Press reported Claude’s request for charges.

“There are enough compromising elements … to prosecute Henry and ask for his outright indictment,” Claude wrote.

Claude’s summons was, in fact, somewhat irregular. On Aug. 20, a new Investigating Judge, Garry Orélien, was assigned to examine the case, and he normally would be the judge to summon and interview Henry, who technically is immune from such inquiries and prosecution. But Claude argued that due to the case’s “extreme seriousness,” he took it upon himself to enter into the investigation, which is in the “national interest.”

Furthermore, on Mon., Sep. 13, the day before Claude’s call for indictment, Henry announced that he was firing Claude as chief prosecutor (replacing him with Frantz Louis Juste), as well as Justice Minister Rockefeller Vincent and Secretary General of the Council of Ministers, Rénald Lubérice. However, at press time, the sackings had not yet been published in the government’s journal Le Moniteur, which makes them official.

Prime Minister Henry did not immediately make a public comment on the pending charges or his travel ban, but in a Tweet in French on Sat., Sep. 11, he did appear to dismiss Claude’s summons as part of “diversionary maneuvers to sow confusion and prevent justice from doing its job serenely.”

Claude sought to question Henry about predawn calls the prime minister had on Jul. 7 with Joseph Felix Badio, a former Justice Ministry official. More recently, Badio worked at Haiti’s Corruption Fighting Unit (ULCC) but was fired in May for “unethical behavior” when suspected of passing classified information to ULCC investigation subjects. Colombian Intelligence investigators say that Badio gave the order by telephone at about 1 a.m. to Colombian mercenaries to execute Moïse, whom they held at gunpoint, in his bedroom after they had described him over the phone as “tall, skinny, and black.” Badio is a central suspect in the assassination and still at large.

Three hours after the killing, at 4:03 a.m. and 4:20 a.m. on Jul. 7, Henry received two calls totaling seven minutes from Badio, who was in the vicinity of the president’s Pèlerin home above Pétionville at the time, according to the Digicel cell-phone company’s geolocators.

Further incriminating circumstances are that Ariel Henry was spending that night at the Montana Hotel in Pétionville, rather than his home, and was unable to be found in the hours and days immediately following the assassination. Two days earlier, Moïse had nominated Henry to fill the prime minister role. Interim Prime Minister Claude Joseph led Haiti for almost two weeks following the assassination, and there was a brief power struggle between the two men when Henry eventually reemerged to lay claim to the post. The matter was finally decided by the “Core Group,” the group of ambassadors allied to the U.S. Embassy, the shadow power in Haiti.

Control of the police is also central to the power struggle. Also on Sep. 13, Vincent sent a letter to Haitian National Police (PNH) chief Léon Charles clarifying that the PNH “comes under the Justice Ministry and is placed under the authority of the holder of the Ministry.” Vincent instructed Charles “to order all officers of the PNH not to execute any order of any political authority” that is not the Justice Minister, and “even less if this order is tainted with illegality.”

Also on Sep. 11, 169 political parties and civil society organizations, including the opposition’s Democratic and Popular Sector (SDP) of lawyer André Michel and the late Jovenel Moïse’s Haitian Bald-Headed Party (PHTK), signed an accord for a new government and transition process with Ariel Henry. A rival political party/civil society coalition called the “Commission to Search for a Haitian Solution to the Crisis,” which includes Jean-Bertrand Aristide’s Lavalas Family party, unveiled their own transition roadmap on Aug. 30. The two coalitions are supposed to meet later this week.

Meanwhile, special U.S. State Department envoy to Haiti, Daniel Foote, indicated that the U.S. wants a broad political accord and is now open to rewriting the Constitution. “I don’t think the current de facto interim government can hold a credible election without a political agreement,” he said at Florida International University (FIU) on Sep. 9. “So it will take time to restore security, for an agreed interim government to establish a CEP [Provisional Electoral Council], possibly carry out constitutional reform, etc.”

A shorter version of this article by Sam Bojarski was published by the Haitian Times on Sep. 14.