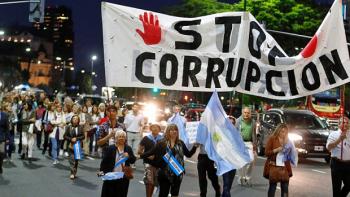 Anti-corruption protests have gripped Honduras and Guatemala in recent weeks

Guatemala's congress is backtracking on an attempt to weaken anti-corruption efforts following massive public outcry and a rapid response by the country's highest court, indicating that while international pressure has not seemed to deter corrupt political elites from attempting to shield themselves, widespread domestic outrage might.

Thousands of Guatemalan citizens filled the capital's public square on September 14 in one of the biggest protests since 2015, when months of sustained anti-corruption demonstrations helped force the resignation of President Otto Pérez Molina, who was ultimately jailed for his involvement in an intricate embezzlement scheme.

The contentious reform that sparked the recent outrage was passed by congress on September 13. It would have essentially gutted campaign finance rules and permitted criminals with sentences of less than 10 years to pay fines in lieu of serving jail time. Many Guatemalans perceived the reform as a "pact of impunity" between politicians to protect one another from investigation, prosecution and prison time for illicit campaign financing.

The Constitutional Court responded quickly by provisionally suspending the reform, arguing it "constitutes a serious threat" and could cause "irreparable damage to the justice system."

Many members of congress issued apologies in response to the widespread condemnation of their votes on the streets and social media, as well as by the Guatemalan press, judicial officials and the court. Others excused themselves from responsibility, claiming that they simply had not understood the implications of the measure they were voting on.

Congress has scheduled a special session for September 15 during which the reform is expected to be retracted. The Constitutional Court will also make a final decision in the coming days about the reform.

Official sources told several Guatemalan news outlets that this reform was just the "tip of the iceberg," the first of a series of legislative moves planned to "legalize corruption" by weakening the justice system and paying back political favors. The reform was meant to be a test to measure public reactions before rolling out other measures, including giving President Jimmy Morales the authority to remove the country's attorney general, Thelma Aldana, sources said.

The Attorney General's Office and the United Nations-backed International Commission against Impunity in Guatemala (Comisión Internacional contra la Impunidad en Guatemala - CICIG) have recently come under fire by Morales and congress after announcing an investigation into the president's campaign finances.

As tensions continue to mount in Guatemala, politicians had not been deterred by strong international pressure, but finally appear to have overplayed their hand, tipping the scales of domestic anger and backing themselves into a corner.

Congress apparently intended for the reform to be a litmus test of public opinion ahead of several other measures with similar aims. The public outrage against the "pact of impunity" provided a clear answer.

While the reform itself may seem minor amid the political chaos enveloping Guatemala, it appears to have been the "drop that made the cup run over" in terms of public outrage following other recent controversies, including Morales' failed attempt to oust CICIG head Iván Vélasquez and a congressional vote that protected Morales' immunity from prosecution.

"This slipped out of their hands," one anonymous official told La Plaza Pública. "They didn't measure the consequences of their votes and now they have to go back to square one because they don't know how to help President Morales" or how to honor their pact with businesses, politicians and former officials charged with corruption.

Now that the public, judicial officials and the country's highest court all appear united to protect anti-corruption efforts, politicians will likely have little room to slip through self-serving laws and brazenly remove their enemies. If public support or attention flags, however, corrupt elites may attempt quieter moves to undermine anti-graft initiatives in Guatemala.