Pushing for a fundamental reassessment of Canada's foreign policy (podcast) 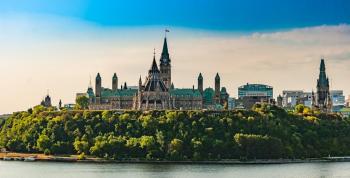 Bianca Mugyenyi is a long-time activist in multiple movements and she is currently the director of the Canadian Foreign Policy Institute (CFPI). Yves Engler is also a long-time activist and writer, and he is a fellow at the CFPI. Scott Neigh interviews them about the organization's work to present a critical challenge to Canadian foreign policy across a broad spectrum of issues.

The myth of Canadian benevolence is one of the most fundamental features of this country's political culture. We could talk about a lot of different ways that it shows up, about how it manages to persist, and about its utility for a nation-building project that advances a certain narrow set of interests and pretends they are universal. The focus of today's episode, though, is on Canada's role in international affairs. In that realm, the myth manifests as a deep commitment to seeing Canada as a force for good on the global stage. In part, this reflects a genuine and admirable desire on the part of many Canadians for this to be true -- but it is a testament to the power of this myth that it retains its grip in the face of so much evidence that it just isn’t.

There is, of course, a long history of grassroots projects, critical writing, and social movements pointing out the many harmful roles that Canada plays internationally. Mostly, these focus on specific issues -- things like the predatory role of Canadian mining companies in the Global South; the Canadian state's complicity in oppressing particular peoples, as in Haiti or Palestine; Canada's support of coups, as in Haiti, Bolivia, and many other countries; Canada's role in the arms trade; Canadian militarism in general or participation in particular wars or occupations targeting non-Western countries; our consistent failure to meet international climate targets, despite flowery pro-climate rhetoric; our current plan to spend $19 billion on a fleet of new fighter jets; our refusal to support measures to ban nuclear weapons; and our support for trade agreements that institutionalize various forms of global injustice.

Mugyenyi and Engler had been talking for a while, however, about the fact that there was really no organization taking a critical approach to the whole spectrum of foreign policy issues in the Canadian context. Earlier this year, they found the perfect opportunity to found one.

The context was Prime Minister Justin Trudeau's high-profile, high-stakes bid to win a seat for Canada on the 15-member United Nations Security Council. Mugyenyi, Engler, and some allies wrote an open letter that challenged the myth of Canadian benevolence and briefly made the case for why Canada did not deserve a seat on the security council, citing some of the issues listed above and others. They got some high-profile signatories and organizational endorsements, and published it in the Toronto Star. Then they waged a very visible and noisy month-long campaign in opposition to Canada's bid -- which Canada ultimately lost.

In the wake of the visibility and momentum that provided, they simultaneously launched the Canadian Foreign Policy Institute as an organization along with a new campaign -- a call for a fundamental reassessment of Canada's foreign policy. Endorsed by former UN ambassador Stephen Lewis, a number of sitting and former federal, provincial and municipal politicians, and a whole host of prominent activists, the campaign suggests 10 fundamental questions that must be part of any foreign policy reset. As well, since its launch, the institute has been engaged in organizing and participating in a flurry of events on a broad range of issues.

This whirlwind of outwardly focused activity means that they have not had as much opportunity as they had hoped to focus on organizational development. Along with continuing that side of the work, in the future they also hope to continue amplifying the important work being done by other groups on specific issues, and building relationships and solidarity across different struggles related to Canadian foreign policy. They hope to recruit more fellows for the institute. And ultimately, they want the institute's website to be a one-stop repository for critical information and analysis related to every aspect of Canada's foreign policy.

Talking Radical Radio brings you grassroots voices from across Canada, giving you the chance to hear many different people that are facing many different struggles talk about what they do, why they do it, and how they do it, in the belief that such listening is a crucial step in strengthening all of our efforts to change the world. To learn more about the show check out their website here. You can also follow them on Facebook or Twitter, or contact scottneigh@talkingradical.ca to join their weekly email update list.

Talking Radical Radio is brought to you by Scott Neigh, a writer, media producer, and activist based in Hamilton, Ontario, and the author of two books examining Canadian history through the stories of activists.