The question on this year's Earth Day: Will humanity survive? 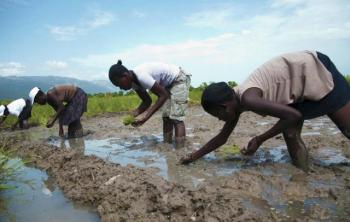 The life systems of the planet are in crisis. The climate is warming. Oceans are rising. Deserts are spreading. Wars for dwindling supplies of oil and water are flaring. Some 90% of the ocean’s large fish – tuna, sharks, swordfish and cod -- have disappeared in the past 50 years. According to some expert estimates, about 10,000 species of plants and animals are becoming extinct every year – an average of 27 a day.

In Haiti alone, biodiversity is under huge assault as we are rapidly losing many species of frogs, bees, fish, flowers, and trees every year.

For example, of the 50 frog species on our island, two-thirds -- 30 species -- live only in Haiti and do not occur in the neighboring Dominican Republic, according to Dr. Blair Hedges, a biology professor at Penn State University and a leader of “species rescue missions” in Haiti and other Caribbean countries.

“Haiti is on the brink of an era of mass extinctions similar to the time when dinosaurs and many other species suddenly disappeared from the Earth,” wrote Barbara Kennedy on Penn State’s science website in 2010 about Dr. Hedges’ work.

This week, in the midst of this bleak tableau, comes Earth Day, which has been observed worldwide since April 22, 1970.

“Happy #EarthDay!” tweeted the US Embassy in Haiti, in both English and Kreyòl, on Apr. 22. “ Today we're celebrating greener cities & cleaner energy.”

The irony of this Tweet, which treats the day as a celebration rather than an alarm, could not be greater. This same embassy, hand in hand with the Martelly regime, is championing investment priorities and policies which devastate Haiti’s natural environment, and promise to devastate it even more, all while wrapping themselves in the words and images of being “green” and “pro-environment.”

If ever there was an example of how capitalism has savaged the natural environment, it is Haiti. When Christopher Columbus landed on our island in 1492, he saw mountains covered with beautiful forests of pine, oak, and mahogany, that reminded him of verdant Spain, and hence he renamed the island Hispaniola in honor of Queen Isabella and King Ferdinand, the Spanish sponsors of his voyage.

However, the European colonists immediately began to rape this paradise. After killing through massacres, disease, and slave labor in gold mines the Arawak population of over three million in a mere 15 years, the Europeans, particularly the French, began to clear-cut the forests to fuel the first great capitalist enterprise on the island: sugar mills.

Two centuries later, capitalism continues to stoke this deforestation by punishing the descendants of the slaves who worked in the sugar mills. Haiti’s peasantry has been pushed off the land by capitalist-imposed neoliberal policies – agricultural dumping and lowering of tariff walls – and forced to flee to the cities. The ruling groups provide no infrastructure for this influx – housing, water systems, sanitation systems, roads  – not even electricity or gas. So the millions of uprooted peasants who have fled to Haiti’s cities over the past 40 years must rely on charbon, which requires twice as much wood per energy unit output as fresh wood used in the countryside.

The deforestation caused by this IMF-dictated urbanization, which is also killing our frogs, is then blamed on the peasants. About 98% of the forests Columbus saw are now gone.

And what is the Martelly regime doing? Accelerating this rape of the land. On the southern island of Ile à Vache, for example, the government unilaterally cut down the island’s one forest, which used to provide the population with livelihoods harvesting crabs and honey, to put in an airport. They are now going to uproot peasants from food producing land in order to put in hotels, golf courses, and casinos, all without the population’s input or participation.

In Haiti’s North, we see a similar crime with the Caracol Industrial Park, for which authorities bulldozed some of Haiti’s most fertile farmland, destroyed a virgin mangrove forest, and destroyed precious coral reefs. A 2009 study for the Organization of American States and the Inter-American Biodiversity Information Network (IABIN)  put the “value of ecosystem services” of the mangroves and coral reefs in Caracol bay at US$ 109 million per year.

Now the Caracol Park, which pays its workers pennies an hour, is sure to spawn another Cité Soleil, complete with canals of open sewage, mountains of smoking garbage, and dirty oil and smoke from nearby power plants fouling the slum next door.

Finally, there is gold-mining, which both President Martelly and Prime Minister Laurent Lamothe are enthusiastically encouraging (and investing in?), despite the Senate’s attempts to block their moves. The Spanish removed most of the big veins of gold five centuries ago. What remains is mostly gold dust, whose extraction requires an extremely destructive and toxic process. Mountain-tops, already denuded of trees, are removed and millions of tons of rocks are “washed” with the deadly agent cyanide, which then poisons streams and groundwater, rendering agriculture and even life nearby unviable.

As we have detailed in past issues of Haïti Liberté, multinational companies like Newmont Mining, after causing massive ecological damage in countries like Peru and Ghana, have been practically chased out of those nations and are now alighting in Haiti. With gold prices at about $1,600 an ounce, they estimate that Haiti has some $20 billion in gold dust in its mountains. They pretend, as they did elsewhere, that they will generate revenue and jobs for Haiti. But in reality, after taking out the precious minerals, they will leave the land defiled and polluted, and the population just as poor but now unable even to practice agriculture due to the poisons they have left behind. Only a handful of local cronies, like Martelly and Lamothe, will get a cut of the riches extracted.

So on this Earth Day, let us remember that we, the Haitian people, are not just fighting against exploitation, oppression, and injustice and for self-determination, equality, and human dignity. We are fighting for the survival of the human species on this planet, starting in Haiti.

“The economic order imposed on the world after World War II has led humanity to an unsustainable situation,” declared Fidel Castro in a Sep. 21, 2009 speech entitled “Humanity is an Endangered Species.” Humanity is facing “a really imminent danger and its effects are already visible.” Fidel gives us a mere 60 to 80 years to avoid mass extinction. So don’t be fooled by the happy face the U.S. Embassy and the Martelly regime are putting on Haiti’s environmental destruction. Let us all join in the struggle against the agents of unbridled and destructive capitalism in Haiti today – principally Martelly and MINUSTAH – to build a new sustainable future, where our children will have unpoisoned land, water, and air in this little corner of the world which our ancestors bequeathed to us.