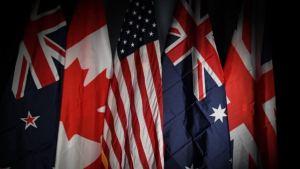 Banning Huawei’s equipment from Canada’s 5G network demonstrates the subordination of powerful economic interests to the prerogatives of the Five Eyes intelligence alliance and imperial ideology.

The Liberals look set to concede to US and media pressure to ban the world’s largest 5G network provider from building its cutting-edge broadband in Canada. Sanctioning China based Huawei is expected to cost Telus and Bell over $1 billion directly. Canada’s telecommunications firms will also pay more for lower quality equipment going forward.

Beyond the interests of two powerful Canadian telecommunications firms, Huawei has important operations in the country. It has about 1,600 employees and a major research centre in this country.

A blow to Canadian economic interests, sanctioning Huawei would be highly political. It likely contravenes WTO rules. Despite its Pegasus spyware being employed in a wide range of international espionage, Canada has not banned Israel’s NSO Group. Most importantly, the security argument for banning Huawei is weak. Little evidence has been offered that the company has created “backdoors” into its equipment to enable it, Beijing or anyone else to spy. Huawei says the company follows the laws of the countries in which they operate.

Conversely, Huawei’s main antagonist, the US National Security Agency (NSA), has been caught breaking US law and spying all over the world, including on powerful allies. Former NSA contractor Edward Snowden revealed that the NSA and its Five Eyes counterparts (Canada, Britain, Australia and New Zealand) operated surveillance programs with the cooperation of telecommunication companies.

The NSA was even caught spying on Huawei. In a 2014 story titled “The NSA has reportedly been spying on Huawei’s servers for years” The Verge explained, “Somewhat ironically, however, the US government appears to be doing something very similar to what it accused Huawei of. The New York Times is reporting that the NSA has created its own ‘back doors’ directly into Huawei’s telecommunications networks for the purpose of collecting information on the vast array of hardware that the company claims connects a third of the global population.”

One motive for targeting Huawei is that it is less willing to follow Five Eyes directives. The Five Eyes sought what they accused Huawei and China of. In September 2018, the intelligence alliance requested communication providers build “back doors” in their systems, allowing the Five Eyes espionage agencies full access to communications. The Australian government actually published a statement, which was later removed, stating that “technical, legislative, coercive or other measures” should be considered to implement these “back doors.” The campaign to paint Huawei as a privacy violator is the long-time war criminal calling his enemy a human rights violator.

Rather than a way to protect information, sanctions against Huawei are a bid to halt China’s ascendance in a critical industrial sector. Huawei is China’s first global technological powerhouse and the “Crown Jewel of China Inc.” A Wall Street Journal story titled “Spy chiefs agreed to contain Huawei” detailed a July 2018 Five Eyes meeting in Ottawa where the intelligence officials agreed to weaken the company’s global growth. After the release of Huawei CFO Meng Wanzhou from house arrest in Vancouver three months ago the front page of the Wall Street Journal boasted, “U.S. Set Out to Hobble China’s Huawei, and So It Has”. A variety of US measures targeting the firm over the past three years have hit Huawei hard. “Chinese smartphone maker’s earnings fall 29% as sanctions imposed by Washington choke off supply of parts”, reported the Financial Timesin August.

The move against Huawei is part of a broader effort to stunt China’s bid to break from what Minq Li argues is its status as a “semi-periphery” country in the global order. It also has a broader geostrategic element as well. As Noam Chomsky recently opined on Washington’s campaign against China: “The U.S. will not tolerate the existence of a state that cannot be intimidated the way Europe can be, that does not follow U.S. orders the way Europe does but pursues its own course. That is the threat.”

Canadian commentators say Ottawa needs to ban Huawei from its 5G network to maintain our position within the Five Eyes. In June of last year former Prime Minister Brian Mulroney expressed the position succinctly, telling the Globe and Mail “we have to preserve our relationship with the Five Eyes and whatever that takes, that is what we do.”

But what is Five Eyes? The Five Eyes partnership oozes of white supremacy. Settler colonialism and empire unite an alliance that excludes wealthier non-white nations (Japan and South Korea) or those with more English speakers (India and Nigeria). It is not a coincidence that the only four countries (Canada, Australia, New Zealand and the US) that originally voted against the United Nations Declaration on the Rights of Indigenous Peoples (UNDRIP) in 2007 are part of the Five Eyes. University of Victoria professor John Price has called it “a race-based spy network.”

Born immediately after World War II, the Communications Security Establishment (CSE) is Canada’s main contribution to the “AUS/CAN/NZ/UK/US EYES ONLY” arrangement. Canada received substantial US and British backing to establish its SIGINT (signals intelligence) capacities, which is the CSE’s traditional domain. During World War II London wanted Canada to “assume responsibility for transpacific traffic”, notes Kurt Jensen in Cautious Beginnings: Canadian foreign intelligence 1939-1951. “It was important to have access to Japanese communications traffic with the Western hemisphere, Malaya, and the East Indies.”

For its part, NSA has trained CSE cryptanalysts and in the 1960s the US agency paid part of the cost of modernizing Canadian communications interception facilities. With CSE lacking capacity, intelligence collected at interception posts set up in Canadian embassies around the world was remitted to NSA for deciphering and analysis. In his 1986 book Target Nation: Canada and the Western Intelligence Network James Littleton writes, “much of the SIGINT material collected by Canada is transmitted directly to the U.S. National Security Agency, where it is interpreted, stored, and retained. Much of it is not first processed and analyzed in Canada.”

A number of commentators suggest CSE has shown greater allegiance to its Five Eyes partners than Canadians. Littleton writes, “the agreements may not explicitly say that the United States, through its SIGINT organization, the National Security Agency (NSA) dominates and controls the SIGINT organizations of the other member nations, but that is clearly what the agreements mean.”

Banning Huawei from this country’s 5G network would demonstrate the power of a race-based intelligence network over particular Canadian corporate interests.