Racist stereotypes about Haiti in the media dehumanize Haitians 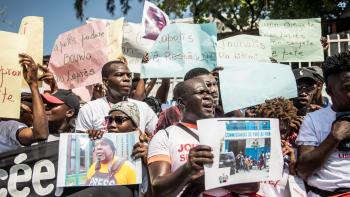 This Valentine’s Day, the streets of Port-au-Prince overflowed with millions of Haitians waving the national flag, chanting “Aba diktati,” or “down with dictatorship.” It happened to be the same exact date that many Haitians took to the streets to overthrow the Jean-Claude Duvalier regime 35 years ago. Civilians in Haiti have been demanding justice for decades, but who’s listening?

This time around, protesters gathered in seven different cities to denounce the presidency of Jovenel Moïse, an autocratic ruler who has been ruling by presidential decree for over a year. Led by Protestant pastors, civil society groups, nonprofits, and unions — and supported by the international community — the demonstrations made it clear the nation is tired of living through another dictatorship: “Yo bouké [they’re tired].”

Working on the front lines as an activist, feminist, and cofounder of Nègès Mawon, Pascale Solages saw thousands of Haitian protesters attempting to reclaim control of their lives. “I see people who know that when they go out on the street, it may be putting their lives in danger, but they know they don’t live enough to not tell themselves that they have to take risks,” she tells Teen Vogue.

The protests were ignited after Moïse refused to step down, announcing on February 7 that he was beginning “the first day of my fifth year” in office. After a tumultuous yearlong electoral delay due to allegations of fraud in 2015, his opposition argues that his mandate actually expired last month, saying his five-year term began in 2016 and not the year after. Not only did Moïse reject those claims, but he accused opposition leaders of planning a coup against him. He retaliated by arresting 23 people, including a Supreme Court judge, a surgeon, and a senior police official. This crackdown did not stop Haitians of all ages from mobilizing against Moïse’s questionable term and foreign support. As The Nation reported, “It’s not about one criminal; it’s about a criminal system, supported by very heavy hitters, including the international community.”

Yet as the political crisis deepened, Haitians took to Twitter to denounce the way the media was covering it. As is often the case in news coverage about the Caribbean country, journalists are resorting to dehumanizing phrases that perpetuate racist stereotypes.

Last month, Marlene Daut, a professor of African diaspora studies at the University of Virginia, called out mainstream publications like The New York Times, The Washington Post, and The Guardian for including phrases about Haiti being the “poorest country in the Western Hemisphere” in their coverage. Haitian American journalist Joel Dreyfuss calls this “the Phrase” because media giants overuse it. He describes it as a metaphorical prison that is “something absolutely true and absolutely meaningless at the same time.”

Critics say the phrase is harmful because it upholds and reinforces U.S.-centric foreign policy and white supremacy. It denies “people their humanity. To deny someone their complexity is to deny them their humanity, period. And that’s always dangerous,” says Régine Jean-Charles, a Haitian scholar and feminist.

As Daut says, it’s not a coincidence that you rarely see this type of terminology used to describe North America, for example, despite the extreme poverty and political instability present there. It’s also not a coincidence that phrases like the “first Black independent republic” or the “second independent country in the Western hemisphere” rarely make it into stories. Activists are urging news outlets to eliminate the harmful phrase altogether if they aren’t going to address Haiti’s historical complexities in their stories.

“Talking about dictatorships and talking about political corruption fails to contextualize the fact that what we’re all seeing right now happened after a devastating earthquake, happened after perhaps even billions of dollars of aid were wasted, lost, looted, mismanaged into oblivion,” adds Daut.

As Nigerian author Chimamanda Ngozi Adichie once put it, the thing about stereotypes is not that they’re untrue; it’s that they’re incomplete. The same goes for Haiti and how the mainstream media discusses its economy and political situation. In a 2019 essay for Tikkun, Haitian American author and anthropologist Gina Athena Ulysse writes, “Haiti also has one of the highest numbers of millionaires per capita in the region. Ninety percent of the country’s wealth is held by only 2% of its population.”

According to Ulysse, who has long been advocating for more nuanced narratives about Haiti, Haiti’s history reveals it to be the cradle of the Black Lives Matter movement. This narrative sinks under stock phrases. “[Haiti] was the first country in the world to abolish slavery. It did so to protect and value Black life,” she says.

The BLM uprisings last summer prompted demands for media leaders to unlearn their ignorance and reconsider how they portray Black Americans. That same reckoning needs to carry over to their coverage of Haiti because, Ulysse says, “it’s the exact same thing, it’s just in the Caribbean.”

Nadève Ménard, author and professor of literature at the École Normale Supérieure of Université d’État d'Haïti, says that media outlets often get it wrong because of their U.S.-centric worldview. The definition of democracy is not the same in the two countries, she argues.

“[There’s an] insistence on elections above all else, as though that is the ultimate symbol of democracy,” she tells Teen Vogue. “Whereas here, it’s like, you have to work for the people. And if you’re not working for the people, then you’re not in your place. You should not be there. Elections cannot be the end-all and be-all of democracy.”

Haitian activists working on the front lines have noticed that Haitians are extremely upset by the support that the U.S., Organization of American States, European Union, and Canada have extended to the president after he declared another year of presidency.

Dupain, who has been following and participating in the protests closely, said the population is more aware of the external factors that make it impossible for them to establish a functioning democracy. “The difference between recent history is that today there’s a call for accountability, and there’s a call for a cooperative fight against corruption and impurity that is very well and alive,” he says.

There’s a lot that we get wrong about Haiti, from the incomplete stereotypes and narratives that perpetuate racial bias to simply ignoring a nation that has been saying for decades, “Stop killing us. Give us a chance. Give us a life. Give us a future,” Ulysse tells Teen Vogue. The international community is complicit in enabling the corruption they so often criticize, and parroting dehumanizing phrases that lack contextual information and nuance only perpetuates those harms.